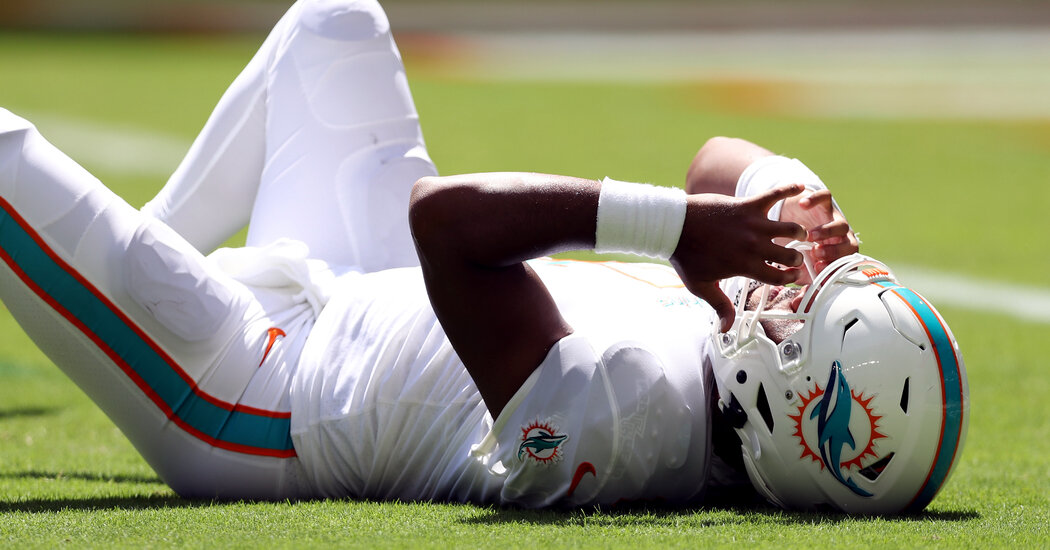 The N.F.L. Players Association has dismissed a neurologist who evaluated the Miami Dolphins quarterback Tua Tagovailoa after Tagovailoa hit his head in a game against the Buffalo Bills last Sunday. Tagovailoa was allowed to return to that game, only to be carted off the field during a game four days later after apparently sustaining a second head injury.

According to two people with knowledge of the union’s decision, the players association “exercised its right” to remove the doctor, known as an “unaffiliated neurotrauma consultant,” who advised the Dolphins’ team doctor during Tagovailoa’s evaluation last Sunday. The outside doctor, who was approved by the N.F.L. and the union, was removed for violations of the league’s concussion protocol, one of the people said, which resulted in an initial diagnosis that Tagovailoa did not have a concussion and his being allowed to play days later.

The dismissal of the doctor, who has not been publicly identified, came two days after Tagovailoa sustained a second hit to the head during the Dolphins’ game on Thursday against the Cincinnati Bengals, which led him to be removed from the game on a stretcher and taken to a hospital. The injury, broadcast in prime time, reignited a vociferous debate about whether the Dolphins had skirted the concussion protocol during last Sunday’s game so that Tagovailoa could return to action as soon as possible.

Soon after the incident last Sunday, the players union said it initiated an investigation, jointly undertaken with the league, into how doctors assessed Tagovailoa’s health after his head slammed against the turf in the second quarter of the game against the Bills in Miami Gardens, Fla.

After the play ended, Tagovailoa reached for his helmet with both hands, struggled to get to his feet and fell after a couple of steps. He was taken to the locker room to be evaluated.

According to the N.F.L.’s concussion protocol, a player cannot return to a game if a team doctor, “in consultation with” an unaffiliated neurologist, determines that a player’s “gross motor instability” was “neurologically caused.” The team doctor, however, has the final say on the player’s diagnosis.

The Dolphins initially said during the game last Sunday that Tagovailoa was being evaluated for a possible head injury. The team later said the quarterback had hurt his ankle and back, and he returned for the second half.

The Dolphins’ head team doctor is Dr. John Uribe, an orthopedist who is also the team doctor for the Florida Panthers. It is unclear whether Dr. Uribe or another team doctor made the final decision to allow Tagovailoa to return to the game against the Bills.

A league spokesman said Wednesday that there was “every indication” that the doctors who evaluated Tagovailoa followed the league’s concussion protocol.

The investigation, which should take no more than three weeks, will seek to determine “if a violation occurred and, if so, the proper disciplinary response.” If the league and union cannot agree on whether the protocol was violated, the complaint will be sent to an arbitrator.

The neurological consultants work on each sideline at every N.F.L. game to assist team doctors if a player is thought to have suffered a head injury. These neurologists typically work at hospitals in the home team’s city. They are approved by the league’s chief medical officer, Dr. Allen Sills, and the N.F.L. Players Association medical director, Dr. Thom Mayer.

The union’s move to dismiss the neurologist may amount to a symbolic action because team doctors, not the unaffiliated neurologists, make the final determinations as to whether players suffered concussions and whether they can return to the game, according to the N.F.L.’s concussion protocol.

“For the avoidance of doubt, the responsibility for the diagnosis of concussion and the decision to return a player to a game remains exclusively within the professional judgment of the head team physician or the team physician assigned to managing T.B.I.,” the protocol says, using an abbreviation for traumatic brain injuries.

According to the N.F.L.’s collective bargaining agreement, a neurological consultant can “present his/her own questions or conduct additional testing and shall assist in the diagnosis and treatment of concussions.”

In response to questions about the status of the team doctor or doctors who evaluated Tagovailoa last Sunday, a Dolphins spokesperson said that the team was letting the joint investigation play out.

On Friday, Dolphins Coach Mike McDaniel said that Tagovailoa had headaches, but was generally feeling better. Later in the day, Tagovailoa said on Twitter that he was “feeling much better and focused on recovering so I can get back out on the field with my teammates.”

The team has not set a timeline for Tagovailoa’s return.