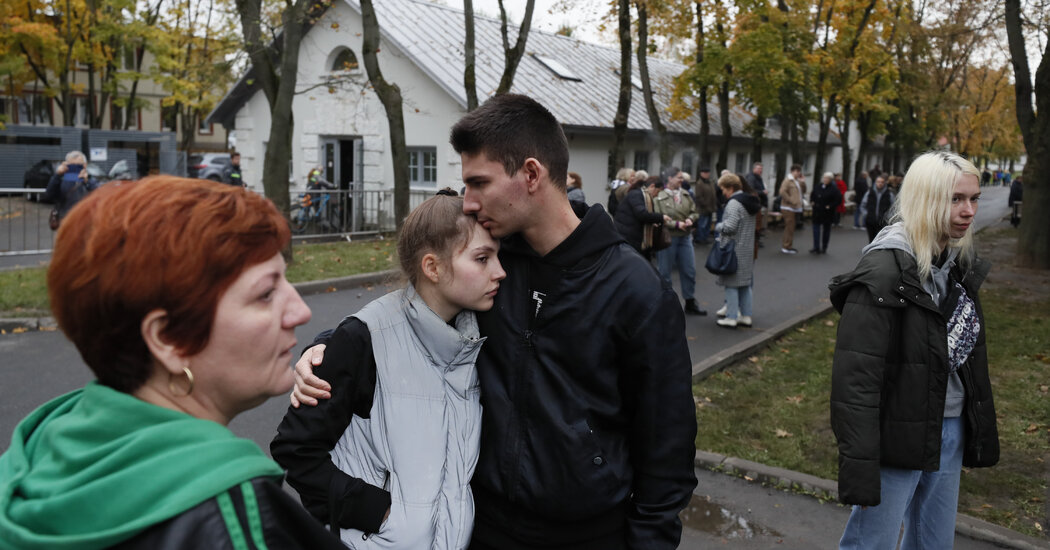 KYIV, Ukraine — President Volodymyr Zelensky and his government are responding with defiance and a touch of bravado to a stream of threats from Russia as it prepares to take the provocative step of baselessly declaring parts of Ukraine to be Russian territory.

Amid ominous signals from Moscow about escalating the war, including hinting at the use of nuclear weapons, Ukrainian forces are pressing ahead with their attack on Russian troops in the east and the south in regions that Russia intends on Friday to claim as its own. And government officials are pursuing a propaganda advantage as well, posting instructions on social media, in Russian, about how Russian soldiers can surrender safely.

Mr. Zelensky has taken pains to point out he is not dismissive of the Russian threat. He said he did not believe Mr. Putin was bluffing about threats of military escalation or the use of nuclear weapons.

But he also gave a public reminder of Ukraine’s recent successes, awarding medals on Wednesday to 320 soldiers and other security service members for the counter strike this month in the Kharkiv region in northeastern Ukraine.

Russia set in motion its plans to claim Ukraine territory after the Ukraine offensive broke through the Russian Army’s lines and forced it to retreat from thousands of square miles of land.

By claiming Ukraine land, Russia wants to assert that Ukraine is attacking its territory, not the other way around. Russian officials have spoken of defending their claims by any means, a hint at the potential use of nuclear weapons. Russia also has announced a draft to call up hundreds of thousands of new soldiers.

The ploy is already underway: Russian proxy leaders from four Ukrainian provinces have traveled to Moscow to formally appeal to President Vladimir V. Putin to join Russia after sham referendums ostensibly backed the idea. A stage has been erected on Red Square.

In Kyiv, officials are responding with the touch of swagger that has characterized their public statements throughout the war, despite more cautious responses from Western allies.

Ukraine’s minister of defense, Oleksiy Reznikov, told a conference of security experts that many Western nations had expected Ukraine’s government to collapse in the initial Russian invasion, but were proved wrong. “The Ukrainians will never surrender,” he said.

After the counteroffensive in the Kharkiv region, initiative on the battlefield shifted to Ukraine, military analysts have said. Ukrainian troops have been pressing from several directions toward Lyman, a Russian-held town in eastern Ukraine, and appeared close to completing an envelopment.

If Russian troops are captured or forced to flee along a remaining road under their control, it would be an embarrassing setback for the Russians in an area they are moving to declare part of their country.

The Kremlin spokesman, Dmitri S. Peskov, said Russia intended at least to capture all of Donetsk, the region containing Lyman. Ukraine now controls about half the province.

Lyman’s fall would also undermine Russian defensive lines in eastern Ukraine, the Institute for the Study of War, an American analytical group, wrote.

Ordinary Ukrainians, ready to believe the worst of Russia after shelling in civilian areas and the discovery of mass graves in territory reclaimed by the Ukrainian Army, have been on edge. Many are posting on social media about fear of nuclear war.

“Next will be a nuclear strike, coming soon,” Stanislav Kotliar, a musician, wrote on Facebook. “This is the main reason I sent my loved ones to Germany, though they wanted to stay in Poland — to keep them away from the nuclear cloud.”

Still, even Ukrainian analysts and former security officials view Russia’s nuclear threat as showing weakness, not strength. Oleksandr Danylyuk, a former secretary of Ukraine’s National Security and Defense Council, said in an interview that Ukraine would not cease its offensives if Russia declared the four provinces Russian territory.

If Russia’s lines continued to collapse after reinforcements arrived from the mobilization, he said, that would increase the risk of a tactical nuclear strike. But he added: “For Putin it’s wishful thinking Ukraine and the West will step back. It’s important to keep biting territory occupied by Russia. This is what Putin is trying to avoid, so we should do this.”