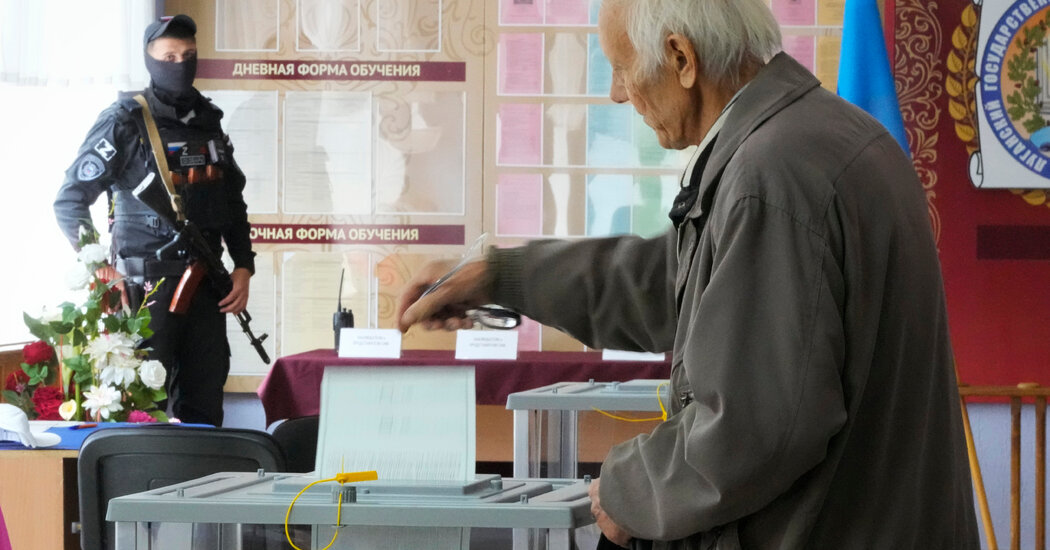 The Kremlin announced that it would hold a ceremony on Friday to begin absorbing four Ukrainian territories, pressing ahead with a widely condemned annexation effort even as Ukrainian forces gain ground in some of those areas.

President Vladimir V. Putin will deliver a “voluminous” speech, his spokesman said on Thursday, seeking to ignore his military’s struggles in Ukraine, rising domestic dissent and worldwide denunciations of referendums in the occupied regions, where some were made to vote at gunpoint.

Even though Russia has failed to fully control the four territories it seeks to annex despite months of bloody fighting, the Kremlin was preparing a show designed to present a sheen of legitimacy to its illegal takeover. The authorities in Moscow put up billboards and a giant video screen in Red Square and announced road closures for Friday. State media described it as preparations for a rally and concert “in support of the outcome of the referendums.”

The annexation move has been greeted with international condemnation, and Ukraine has essentially ignored the Kremlin’s plans. Russian officials have spoken of defending their claims to the annexed territory by any means, a hint at the potential use of nuclear weapons.

Senior U.S. officials say they do not believe Mr. Putin is poised to use nuclear weapons now, given the response it would draw from the West as well as from Moscow’s allies like China and India.

For his part, Mr. Putin did not mention his annexation plans in a brief television appearance on Thursday, but he did seek to portray himself as being on the right side of history, asserting “the formation of a more just world order is taking place.”

“Unipolar hegemony is inexorably collapsing,” Mr. Putin said. “This is an objective reality that the West categorically refuses to accept.”

In Ukraine Kyiv’s forces pressed on with a counteroffensive that has enabled them to retake territory in the northeast of the country this month and make inroads into Donetsk and Luhansk, two of the regions where referendums were held.

In a speech late on Wednesday, President Volodymyr Zelensky of Ukraine reiterated his denunciation of the votes and said he was working with foreign leaders to coordinate a strong international response.

“Our key task now is to coordinate actions with partners in response to sham referendums organized by Russia and all related threats,” Mr. Zelensky said.

All four regions are partially occupied by Russian troops and the referendums, put on hastily in the face of the military setbacks for the Kremlin, purported to return big majorities in favor of joining Russia.

Governments around the world say the votes lacked democratic legitimacy, given Russia’s invasion of Ukraine in February, the coercion of voters, the absence of independent observers and the flight of many civilians from the areas because of fighting. In addition, the government in Kyiv told its citizens not to participate.

The sequence of choreographed steps for a region to join the Russian Federation is laid out in the country’s constitution and is expected to be followed in the coming days. That follows the pattern of a similar vote in Crimea, a region of southern Ukraine that was annexed by Russia in 2014.

Following the announcements of the purported results, Russian proxy officials in the four occupied areas appealed on Wednesday to join Russia.

In part of a carefully orchestrated process, the Russian proxy leaders in the territories were also expected to sign agreements with Moscow on Friday. The constitutional court, which is seen as a rubber stamp for the Kremlin, would then approve the agreements, and they would be ratified by both chambers of Russia’s Parliament.

At the same time, the Kremlin would introduce a draft law on the admission of the territories into Russia, which would be approved by the lower house of Parliament, the State Duma. Once Russia’s Federation Council passes the bill, it would be signed into law by Mr. Putin.

The Duma’s speaker, Vyacheslav Volodin, announced on Wednesday that the Duma should hold its accession sessions to approve the annexation next Monday and Tuesday.