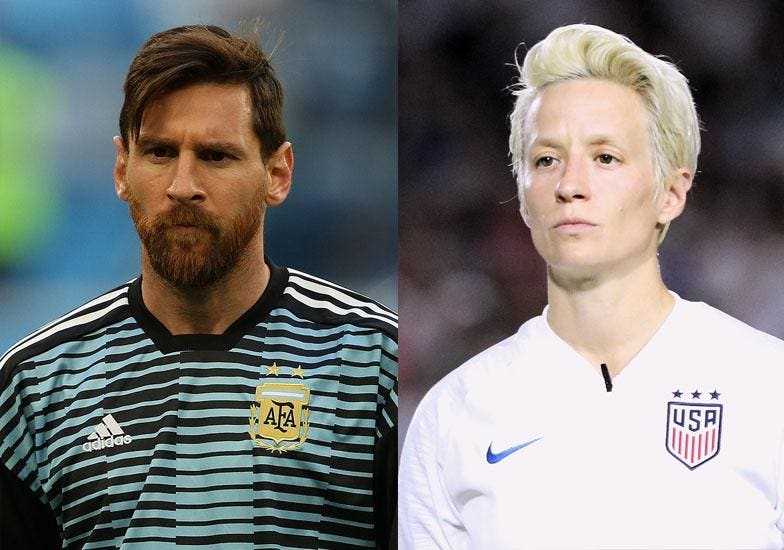 Soccer used to be a huge part of my life. I played on travel teams, competitively throughout high school, and even in Europe as part of a homestay in Germany, the UK, and Denmark. In the Dana Cup finals, the under 14 German team we stayed with were smaller players with exceptional passing skills and vision of the field, whereas the Brazilian team looked like they were 21 and had a much more physical and dynamic style of play. Both teams were quite good but were different and were filled with many unique individually talented players that worked well in concert.

Now I play in a recreational league primarily for exercise and also watch one of my kids play very early child soccer, where the use of space across the field is almost entirely a foreign concept. And as I see some kids that appear so early to have relatively exceptional skills, I wonder about how one might know if someone has talent for the game? For example, some mathematical prodigies have been identified early based on their exceptional math test performance. What about for soccer?

In a highly cited paper on talent identification in soccer led by Triston Reilly published in Journal of Sports Sciences, the authors explain that “There are many factors that predispose towards a successful career in professional soccer. Foremost among these is excellence in games skills and the cognitive abilities to make correct decisions within the game…players must possess moderate to high aerobic and anaerobic power, have good agility, joint flexibility and muscular development, and be capable of generating high torques during fast movements.”

According to Kevin Till and Joseph Baker in Frontiers in Psychology, there continues to be a debate around whether it’s better to specialize early in one particular sport or not. The authors note that the Talent Identification and Development System for professional soccer has grown dramatically over the last two decades, for example “English category 1 soccer academies reportedly invest between £2.3 and £4.9 million per annum…while United Kingdom Sport reported spending approximately £100 million per annum on identifying and developing sporting talent.”

Now a new paper published in Research Quarterly for Exercise and Sport by Kathleen M. Paulsen, Brendon P. McDermott, Aaron J. Myers, Michelle Gray, Wen-Juo Lo, and Matthew S. Ganio at the University of Arkansas examines and seeks to expand upon one talent identification measure used in elite soccer, the 30-15 Intermittent Field Test (IFT) (here is a video of it being done live). Lead author Kathleen Paulsen, now at John Brown University, explained to me that:

“I played soccer at the University of Arkansas and when I was a player, we had to go through 10 pre-season “tests”. We had to pass 7 of 10 in order to be eligible to play. They ranged from the flying 40, to a timed mile, to a high jump, to a dribbling and passing test. I always had major issues with this method of evaluation because all of them were disconnected from one another. Soccer performance requires that you deal with all of these elements at the same time, while under pressure. One of the most significant and greatest elements of soccer performance (in my opinion as a coach) is the ability to be fatigued and be able to be elite in a technical component (dribbling at top end speed) and performance under pressure (psychological pressure) at the same time. I have not seen a test/tool that is multifaceted in its approach to talent identification.”

To help remedy this, Kathleen and colleagues added a dribbling component to the 30-15 IFT, which Kathleen explained is a fitness test used at the highest levels of women’s soccer: “This fitness test was ideal for adding a dribbling component for multiple reasons. 1) It had enough distance between turns to allow players to get into higher speeds. 2) It had 3-meter zones that the player had to be within (allowing for some realistic measure of error while dribbling). 3) It’s a test that is becoming more widely used by soccer players.”

As the authors conclude in their new paper: “The 30-15 IFT performed while dribbling a soccer ball may be a useful tool in assessment and talent identification in elite women’s soccer and was shown to be reliable.”

This study was conducted on college aged individuals. Thus, for deeper consideration on whether earlier tools can be used in talent identification in soccer and other sports generally, a good discussion comes from The Sports Gene by David Epstein and this TED video on the importance of a sampling period for trying new things and building a range of skills. Additionally, Till and Baker, in their paper “Challenges and [possible] solutions to optimizing talent identification and development in sport,” note that early identification practices in soccer, for example, have been debated due to their potential lack of accuracy, and that “The goal of a talent identification decision is to correctly identify a developing athlete with the potential to become a successful elite performer in their respective sport.”