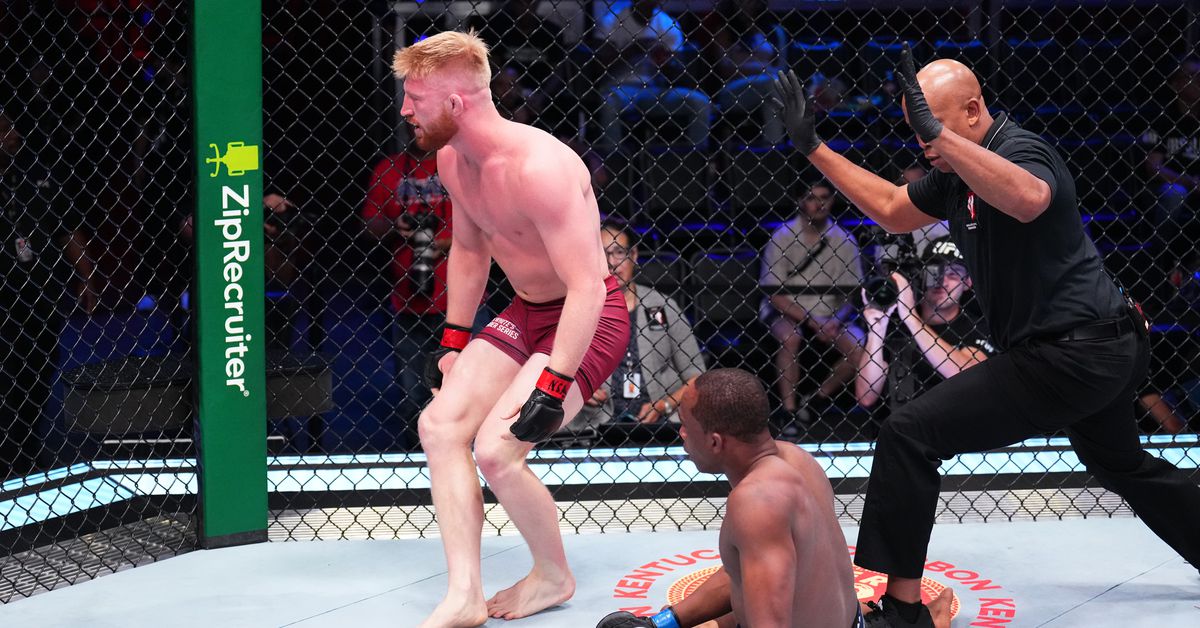 Bo Nickal is (finally) headed to the UFC after picking up the second-fastest finish of the DWCS Season 6 finale on Tuesday night.

Nickal’s trip to the UFC was likely a forgone conclusion given his first performance, a quick finish that helped promotion president Dana White get some additional shine on his talent-development network. But Nickal needed just 52 seconds to tap his opponent, Donovan Beard, and the triangle he rolled for was the third finish he attempted in the short time he spent in the small octagon at UFC APEX. First it was an overhand left, then it was a guillotine choke, and then it was the triangle choke that left Donovan – and the audience – wondering what just happened.

You didn’t need to read White’s notes to know what was written, but the “goddamn” he said he wrote on his bout sheet said it all. Season 6 resulted in 43 contracts, perhaps none as anticipated as decorated collegiate wrestler turned MMA fighter Nickal, and White could barely contain his glee at the future hype to cash.

It may have taken Nickal two tries to get his UFC contract, but he didn’t fail to remind White, who said of the newcomer’s reaction, “Hey dummy, you should have signed me the first time. Get it done.”

Patterson has Cenci shooting after going out

Sam Patterson had a slow start out of the gate, but when he got Vinicius Cenci to the canvas, he took over with his submission skills. Patterson used his height and reach to keep the aggressive Cenci at distance and then snuck in an uppercut that stopped a takedown in its tracks. Cenci was immediately fighting for his neck as Patterson transitioned from D’Arce choke to power guillotine to rear-naked choke, the latter a result of a mad scramble away from danger.

Cenci might have gotten free of the guillotine choke, a submission he finished on four occasions before walking into DWCS. Instead, he ended up unconscious and shooting on his opponent after a frantic tap was followed by a non-consensual nap.

The Howler Head logo got a bloody finish after Jack Jenkins’ elbow opened Freddy Emiliano Linares’ brow, setting the table for a third-round finish via TKO. Jenkins’ wrestling and ground-and-pound was formidable on its own, and when aided by a stream of plasma, it made a good enough argument for referee Mark Smith to call off the fight midway through the third, after a Linares wardrobe malfunction and takedown attempt hadn’t deterred Jenkins from doing what he’d done for much of the fight.

At the 4:30 mark of the final frame, Jimmy Crute training partner Jenkins had his finish, a little later than his first-round domination suggested. Linares hung on a lot longer than the mount he gave up in the opening frame with two minutes left, but no matter what he did, Jenkins was always a step ahead.

As soon as Rafael Ramos Estevam figured out the athletic Joao Elias was no threat from the bottom, he made sure to put him on the mat and pound him out.

Elias came out hot, showing off high-energy techniques on the feet and the mat, where he tried to hop from submission to submission in scrambles. He also left his head exposed, a perfect target for Estevam to batter his brain cells. Dazed by the punishment (ground and pound and a tongue lashing from his coach), Elias couldn’t get back in the fight when the second round commenced. An accidental headbutt at the start didn’t help anything, but the ground and pound finished the job for Estevam at 2:25 of the second round.

Mateus Mendonca did his Chute Boxe teammate Charles Oliveira proud with a first-round drubbing of Ashiek Ajim in the DWCS opener. Ajim got a little too close and caught a right hand that knocked him backward. As he fell, he took a left hook that finished the job, sending his head bouncing off the canvas. At 48 seconds of the first round, it was all over.