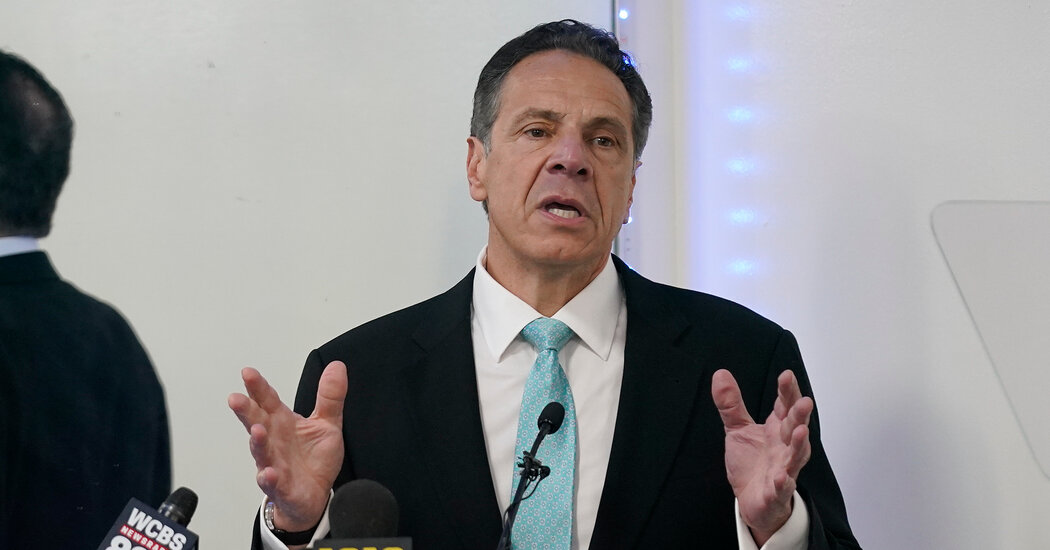 Former Gov. Andrew M. Cuomo of New York on Wednesday outlined his path back from the political wilderness a year after resigning in disgrace: He plans to host a weekly podcast, establish a gun-safety initiative and start a political action committee.

In an eight-minute video, Mr. Cuomo, a once-powerful Democrat who resigned over sexual harassment allegations last year, said that he had gained a “new perspective on politics” during his time on the sidelines and framed his efforts as an attempt to help bridge the political discourse in a divided nation.

In unveiling his plans, Mr. Cuomo made no direct mention of the circumstances that led to his resignation, but he painted a grim picture of a deeply polarized country, while taking pointed jabs at “cancel culture” and the “mob” mentality on social media, both of which he has previously blamed for his political demise.

“I’ve seen both extremes, the worst in politics and opportunism,” Mr. Cuomo said. “But I’ve also seen the best in government and service. I believe, at the end of the day, I will be the better for it, and I want to move forward and focus on what is really important.”

Of his new political action committee, he said only that it would aim “to elect the right people in office,” adding that “we do not need more panderers, we need producers.” It remains unclear if he will seek to transfer some of the $10 million left in his campaign account to jump-start the committee.

The Downfall of Andrew Cuomo

The path to resignation. After drawing national praise for his leadership in the early days of the pandemic, Gov. Andrew Cuomo of New York was confronted with several scandals that eventually led to the announcement of his resignation on Aug. 10, 2021. Here is what to know about his political demise:

Sexual harassment accusations. Multiple women accused Mr. Cuomo of harassment, including groping and lewd remarks. An inquiry by the New York State attorney general corroborated the accounts. Five criminal inquiries into allegations of sexual misconduct were launched against Mr. Cuomo; the cases were dropped due to insufficient evidence, despite the women accusing the former governor being found to be credible.

Criticizing Democrats in Washington for failing to pass an assault weapons ban, he shared only the name of his new guns initiative: “Gun Safe America Project.”

And he did not indicate when he would launch his podcast or what its topic would be, but he vowed that he would “speak the full truth, unvarnished” because “unfortunately, today we are short on facts and long on opinion.”

“This show will have different formats,” Mr. Cuomo said, speaking directly to viewers while wearing a dark suit jacket and blue button-down shirt against a white backdrop. “But, more than anything, I want to have the conversation with you because it is about you and you having the right information and your political will to make a difference.”

The video message amounted to the most concerted effort yet by Mr. Cuomo to re-enter public life after he abruptly stepped down under public pressure and the threat of impeachment, unanimously shunned by members of his own party.

Mr. Cuomo, 64, had kept a relatively low profile since an investigation overseen by the state attorney general, Letitia James, concluded that he had sexually harassed 11 women, including state employees. The allegations, which he has largely denied, overlapped with a series of other scandals that engulfed his administration, including efforts to obfuscate the true death toll of nursing home residents during the pandemic.

But over the past few months, Mr. Cuomo has made hesitant attempts to rehabilitate his reputation and chart a path back to relevancy after more than a decade of governing with outsize power in Albany.

He delivered speeches at a handful of Black churches, was spotted dining with Mayor Eric Adams and has kept a semiactive social media presence. He deployed his lawyers to publicly discredit the attorney general report that led to his downfall and filed an ethics complaint against Ms. James.

Earlier this year, he spent at least $2.8 million in television ads that sought to burnish his legacy as governor, leading to intense speculation that he might jump into the governor’s race and attempt a political comeback. In the end, he decided against running.

Since he resigned, five district attorneys have closed their investigations into some of the sexual harassment allegations because of insufficient legal grounds to bring criminal charges, though several stressed that they had found the women’s testimony credible.

Even so, Mr. Cuomo is facing lawsuits from two of the women: a state trooper who accused him of repeated instances of touching her back and stomach and Charlotte Bennett, a former aide who accused him of posing intrusive questions about her personal life that she took as sexual overtures.

In the video message — titled “What’s Next” — Mr. Cuomo said that after decades in the limelight he had used his time outside politics to engage “in something called life,” spending time with his three daughters and his mother, Matilda, as well as hiking, fishing and restoring an old Harley-Davidson motorcycle.

Mr. Cuomo, who himself had a reputation as a ruthless politician who strong-armed both allies and enemies into submission, lamented that politics had become a blood sport. He said that “democracy was in peril” and that his efforts were meant to give hope to Americans who felt disillusioned by the state of the country.

“I have fought the good fight in government and politics all my life, and I am not done fighting yet,” he said.