A MUM is defending her daughter after she was punished for breaking her school’s “extreme” uniform rules.

Louise Tyms says the dress code at Ormskirk School in Lancashire is “ridiculous and so outdated” after her daughter was listed as a student not following the rules.

The uniform policy state shoes must either be plain, sturdy, smart and black or ballet style pumps or leather trainers.

Skirts and pinafores need to be at least to the knee and never rolled up.

Socks should also be plain, grey and knee length or, alternatively, plain black tights – a minimum of 40 denier – can be worn.

Louise has hit out at the uniform expectations after parents were told there’s “zero tolerance” for students not adhering to the policy. 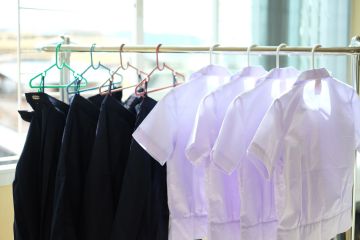 She told the Liverpool Echo: “I fully understand having an appropriate uniform and focusing on health and safety etc but in today’s culture it’s absolutely ridiculous to focus on girls rolling their skirts down and having knee high socks and 40 denier tights.”

Louise has asked the school to explain their reasoning to her but says they are yet to do so.

The concerned mum said: “They are being teenagers, they want to feel comfortable and confident in what they wear.”

“If they do PE, the shorts are tiny and the tops are slim fitted. It just seems very extreme.

“My daughter is always good in class, never gets told off and is always in yet her name is jotted down because of her uniform.”

The school told parents that they are in the process of “identifying students” who have the incorrect uniform.

Those who are still not wearing the right clothing by October 3 will not be able to attend lessons, caregivers were told in a letter sent home.

They will also have their break and dinner in a separate location “away from the rest of the school”.

The letter added: “If a student is persistently failing to comply with our Uniform and Standards Policy, then unfortunately we will have no other option than to issue a suspension from school.”

A spokesperson for Ormskirk School said: “We have high standards across the school, whether that is in results, behaviour or uniform, and we make no apologies for believing it is right that students attend school in appropriate attire.

“The vast majority of parents agree with us on this and we are proud that our students are so well turned out. We do not believe it is ‘out-dated’ to want students to look smart when they attend school.”

Her concerns come as furious parents have hit out at a school’s new strict uniform policy as they claim children face “military-style checks” over their clothes.

Moorside High School in Werrington, Stoke-on-Trent, has seen a backlash over the changes as the new school year kicks off.

The school has provided mums and dad with a new diagram on all the clothes and footwear not allowed this year.

One parent claims that any children who do not adhere to the new uniform rules now face isolation and not being allowed into class.