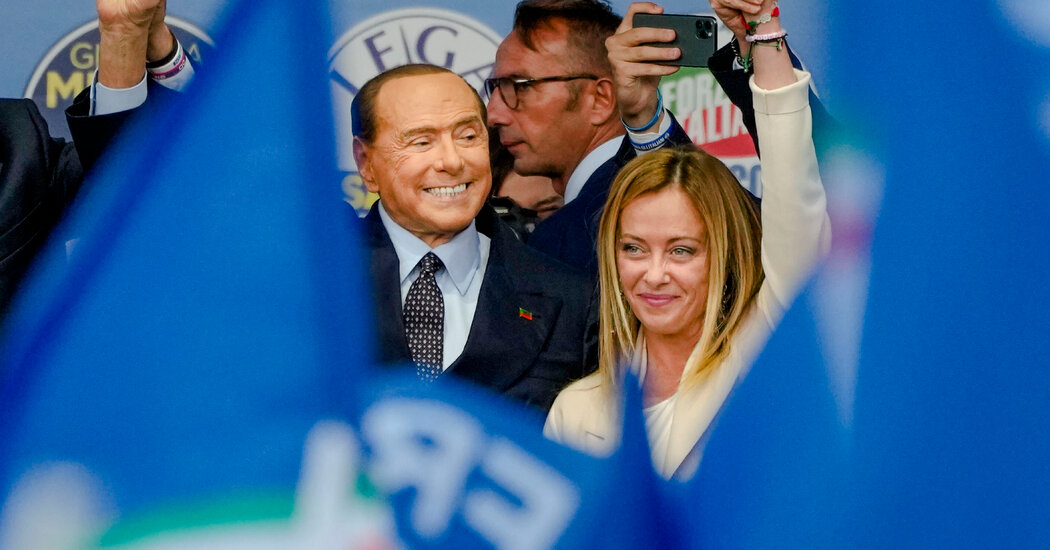 WASHINGTON — The Biden administration publicly reacted with calm on Monday to Italy’s election of a far-right governing coalition, pledging to work with the country’s incoming leaders despite concern about their party’s fascist roots.

But the latest rightward lurch of a European country — two weeks after a far-right party performed startlingly well in Sweden’s elections — is raising concerns in Washington about the continent’s combustible populism and what it could mean for some of President Biden’s foreign policy goals, including confronting Russia and defending democracy against authoritarianism.

It has also underscored divisions within the United States, as members of the Trump wing of the Republican Party embraced the rise of a nationalist whose party has roots in Mussolini-era fascism.

In the near term, the political success of Giorgia Meloni and her nationalist Brothers of Italy party, which leaves her poised to become the country’s next prime minister, is unlikely to rupture relations between Washington and Rome. Nor should it hobble the U.S.-led effort to unify Europe in defense of Ukraine against Russian conquest. Although Ms. Meloni has espoused radical nationalist views, and key members of her coalition openly oppose the European Union and call for friendlier relations with Moscow, as a candidate she expressed support for NATO and the defense of Ukraine.

Writing on Twitter on Monday, Secretary of State Antony J. Blinken set a tone of comity, saying that the Biden administration was “eager to work with Italy’s government on our shared goals: supporting a free and independent Ukraine, respecting human rights, and building a sustainable economic future.”

“Italy is a vital ally, strong democracy, and valued partner,” he added.

Mr. Blinken’s comments appeared to reflect an initial belief that officials in the Biden administration can do strategic business with Ms. Meloni, even if many of her core values, including skepticism of gay rights and “gender ideology,” clash with their own.

The Biden administration also understands that even an anti-establishment firebrand like Ms. Meloni will need financial support from the European Union to survive in office — a tall order if she wages political fights with Washington and Brussels. And with Italian public opinion slanted against Russia after its invasion of Ukraine, Ms. Meloni would be hard-pressed to soften Italy’s line toward Moscow or seek to block the E.U.’s consensus-based support for Kyiv, analysts said.

“From a foreign policy perspective, I do not expect a U-turn,” said Giovanna De Maio, a visiting fellow at George Washington University who studies trans-Atlantic relations. “It will be a moderate approach, at least for now,” she added.

In an unsettling sign for the administration and centrist European leaders alike, however, several prominent Republicans hailed Ms. Meloni’s showing — a reminder of the growing kinship between European nationalists and the Trump wing of the Republican Party, who share a general philosophy of traditional social values, support for restricted immigration and deep skepticism of multilateral institutions.

“This month, Sweden voted for a right-wing government,” Representative Lauren Boebert, Republican of Colorado, wrote on Twitter. “Now, Italy voted for a strong right-wing government. The entire world is beginning to understand that the Woke Left does nothing but destroy. Nov 8 is coming soon & the USA will fix our House and Senate! Let freedom reign!”

After Mr. Trump derided the European Union and clashed with longtime U.S. allies like Germany and France over foreign policy, Mr. Biden has worked to restore relations between America and Europe. That effort was accelerated by Russia’s invasion of Europe.

But the shock wave from Italy is a reminder of Europe’s volatile politics and the threat they pose to the established, U.S.-backed order.

The ascent of Ms. Meloni’s coalition also deals a blow to a central theme of Mr. Biden’s presidency: the effort to defend democracy and reject authoritarianism abroad. Europe’s right-wing parties have shown authoritarian tendencies in power, with conservatives in nations like Poland and Hungary cracking down on press freedom, an independent judiciary and other checks on central power.

Europe’s far right may see greater opportunity in the months ahead, analysts said, as the continent stumbles toward winter amid soaring energy prices and other forms of inflation that many economists predict will produce a recession. Mr. Blinken and other administration officials have warned that winter will test Europe’s resolve on Ukraine, as analysts worry that economic pain could shift public anger away from President Vladimir V. Putin of Russia and toward the continent’s establishment leaders.

“In the coming months, our unity and sovereignty will be tested with pressure on energy supplies and the soaring cost of living, caused by Russia’s war,” Mr. Blinken warned during a stop in Brussels this month.

Daniel Baer, the director of the Europe program at the Carnegie Endowment for International Peace, said that if economic conditions grew much worse, they could “drive populist strains on established democracies the way the 2008 financial crisis did.”

Mr. Biden has worked with a set of strongly pro-American, internationalist leaders in Europe’s major capitals. France and Germany, along with Britain, have largely been in sync with Mr. Biden’s agenda. Italy was governed for nearly all of the Biden presidency by Prime Minister Mario Draghi, an economist who prioritized Italy’s international integration. Mr. Draghi’s resignation this summer triggered Sunday’s election.

Since then, the far-right Sweden Democrats won the second-largest share of the country’s vote, Ms. Meloni is poised to lead Italy once a government is formed there and Spain’s Vox party continues to gather momentum.

“The sighs of relief that a lot of people breathed when Scholz was elected and Le Pen lost — was that premature?” Mr. Baer asked.