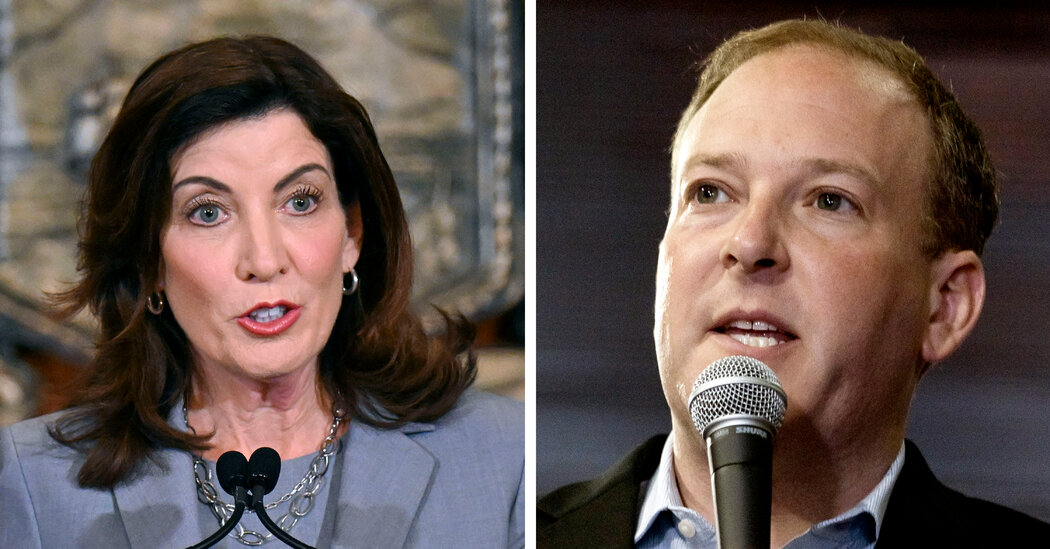 There have been accusations of cowardice, name-calling and, of course, liberal use of a chicken suit motif.

With six weeks until Election Day, the candidates in the New York race for governor have fully embraced a now-familiar rite of passage to the governor’s mansion in Albany: the debate over the debate.

Republican Lee Zeldin, a Republican from Long Island, had for weeks challenged Gov. Kathy Hochul, the Democratic incumbent vying for her first full term, to as many as five debates ahead of the general election on Nov. 8.

The taunting played out in typical New York fashion: Mr. Zeldin incessantly accused Ms. Hochul of “chickening out” on Twitter and in emails to supporters, while The New York Post ran a front page of Ms. Hochul — whom they called “scaredy Kat” — in a bright yellow chicken suit.

Despite the goading, Ms. Hochul remained noncommittal until last week, when she said she would apparently participate in only one debate: an event hosted by Spectrum News NY1 on Oct. 25.

Mr. Zeldin decried her decision as “cowardly” and insisted that the candidates should have several debates. Mr. Zeldin has accepted invitations to two other debates that Ms. Hochul has not agreed to. But he has not, as of now, accepted the invitation to the Oct. 25 debate, in an apparent sign of protest, posturing or bargaining — or all three.

The impasse, however long it lasts, has only escalated the one-upmanship between the campaigns. On Thursday, Ms. Hochul’s press secretary posted an image on Twitter of Mr. Zeldin in a chicken suit; Mr. Zeldin shot back with a statement challenging Ms. Hochul to “come out, come out wherever you are!”

So, as matters stand, it remains unclear when, or even if, New Yorkers will get an opportunity to watch Ms. Hochul and Mr. Zeldin face off as they contend for the state’s highest office, in a race largely defined by competing visions around issues of public safety, affordability and reproductive rights.

As is typical for challengers seeking to unseat incumbents, Mr. Zeldin would stand to benefit the most from the free airtime associated with debates. It is plausible that he will eventually capitulate to Ms. Hochul’s offer of a lone debate.

Ms. Hochul’s stance is not unusual for incumbent governors in New York.

Mr. Cuomo, who was often reluctant to debate his rivals, held out until about two weeks before Election Day in 2018 before committing to a single debate with his Republican opponent, Marcus J. Molinaro, who had repeatedly accused him of making “a mockery of democracy” and “hiding from public scrutiny.” (Tabloids and chicken suits were also involved in that process).

Mr. Cuomo came under similar monthslong pressure from the actress Cynthia Nixon, who unsuccessfully challenged him during the Democratic primary earlier that year, until he finally agreed to one debate.

Years before, in 1994, George E. Pataki was not given the chance to debate former Gov. Mario M. Cuomo, a three-term Democrat. Mr. Pataki, a Republican, prevailed nonetheless in an upset victory, but he did not debate his opponents in the following election in 1998.

In announcing Ms. Hochul’s participation in the Oct. 25 debate, which will take place at 7 p.m. at Pace University, her campaign said that she had participated in two debates during the Democratic primary earlier this year. It added that she would announce “additional public forums and speaking engagements” ahead of November.

“Governor Hochul looks forward to highlighting the clear contrast between her strong record of delivering results and Lee Zeldin’s extreme agenda,” Jerrel Harvey, a spokesman for the Hochul campaign, said in a statement.

Mr. Zeldin’s campaign said that Mr. Zeldin had already accepted two debate requests — from WCBS-TV and WPIX-TV — and urged the local networks to proceed with the debates “without her and with an empty podium.” The debate on Spectrum News NY1, the campaign said, could also be limited to cable viewers, potentially leaving out television viewers who mostly rely on broadcast channels or are subscribed to another cable provider.

The Zeldin campaign also noted that the Oct. 25 debate would take place over a month after election officials began mailing absentee ballots to voters.

“Voters should have the opportunity to hear where the candidates stand before they vote, not after,” Mr. Zeldin said in a statement. “Scaredy cat Hochul can run but she can’t hide from her absolutely abysmal record on the issues most important to New Yorkers, including rising crime, skyrocketing cost of living and an eroding quality of education.”