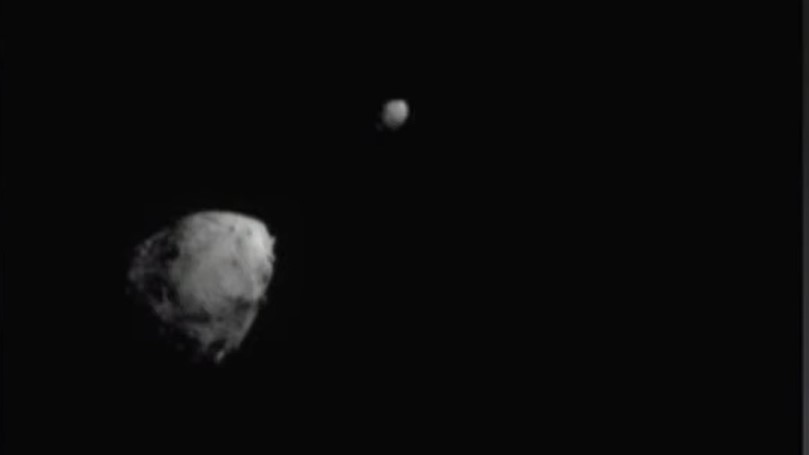 Didymos is a binary asteroid system: a pair of harmless, lumpy rocks minding their own business. Individually the two rocks are known as Didymos and Dimorphos.

The collision was designed to change the moonlet’s orbital speed by a fraction of a percent according to NASA (opens in new tab) in a bid to demonstrate a method of deflecting an asteroid for planetary defense using the “kinetic impactor” technique. While Didymos is not a threat to Earth, this technology could protect Earth from other space rocks that may be more dangerous.

The pair of asteroids together are known as Didymos, but individually the two rocks are Didymos and Dimorphos. Didymos is a large asteroid around half a mile (2,560 feet or 780 meters) in length, while Dimorphos measures a mere 525 feet (160 m), according to the Johns Hopkins University Applied Physics Laboratory (opens in new tab) (JHUAPL), where the DART mission is based. In some previous coverage from Space.com, Dimorphos has been referred to as Didymos’ moonlet or as “Didymoon.”

As the two asteroids orbit the sun, Dimorphos also orbits Didymos, circling its larger twin every 11 hours and 55 minutes.

For decades, telescopes on Earth like Arecibo Observatory and Lowell Discovery Telescope have been able to track that movement “just like clockwork,” said planetary scientist Nancy Chabot of JHUAPL during a press conference held before DART’s launch. As Dimorphos passes between Didymos and Earth, telescopes around the globe can measure the resulting change in brightness from the system.

Why did NASA want to crash into Dimorphos?

The clockwork motion of the Didymos system made it ideal for the DART mission, a demonstration of NASA’s ability to redirect dangerous asteroids off collision courses with Earth. Didymos itself poses no threat to our planet but served as a test target.

Researchers on Earth were able to observe the effect of the DART spacecraft hurtling head-on into Dimorphos, the smaller asteroid. According to Chabot, after the impact, the scientists expected to see Dimorphos complete a loop of Didymos some 10 minutes faster than its historical schedule.

DART also carried a cubesat called LICIACube to film the larger spacecraft’s impact and beam the footage back to researchers on Earth.

At the time of DART’s impact, Didymos was visible enough to be a good candidate for study and distant enough to be no danger, at approximately 6.8 million miles (11 kilometers) away from Earth.

What else do we know about Didymos?

Didymos is one of the Amor group of asteroids, near-Earth asteroids named after asteroid 1221 Amor. These asteroids orbit the sun mostly between the orbits of Earth and Mars. Didymos in particular takes a little over two years to complete an elliptical orbit around the sun, according to NASA’s in-depth page on Didymos.

The larger asteroid of Didymos probably has a rocky surface covered in boulders, although NASA wrote that it likely lacks the regolith, or fine dust, that covers Earth’s moon and other asteroids. It also lacks any atmosphere, rings or magnetosphere.

Images taken by DART as the spacecraft sped toward its end show a field of gray crags, boulders and pebbles.

NASA. Dart in the news. NASA. Retrieved September 27, 2022, from https://www.nasa.gov/planetarydefense/dart/dart-news