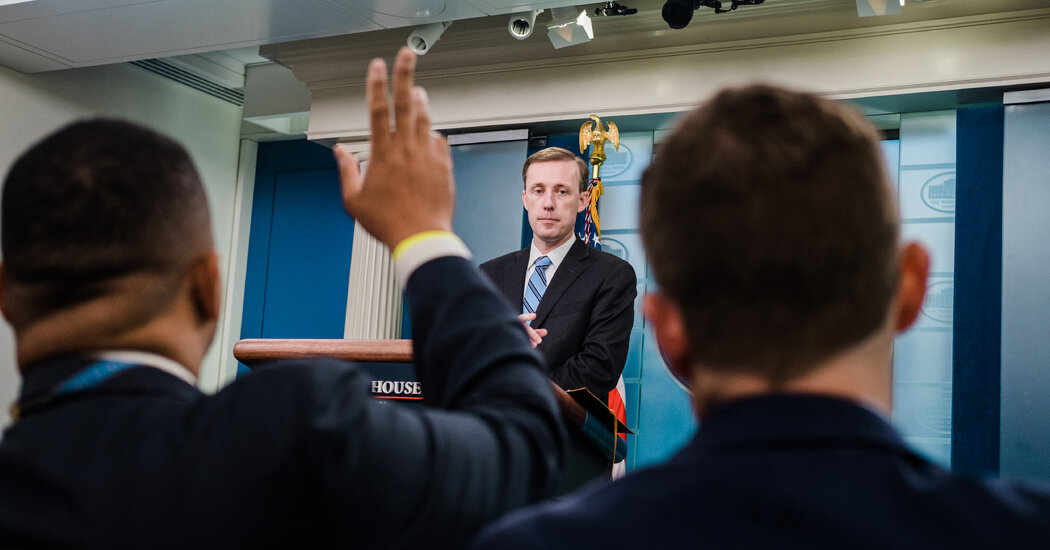 WASHINGTON — President Biden’s national security adviser said on Sunday that the United States had warned Russia that there would be “catastrophic consequences” for the country if Moscow used nuclear weapons in its increasing desperation to hold on to territory in Ukraine, adding that in recent days the United States has “spelled out” how the world would react in private conversations with Russian officials.

The adviser, Jake Sullivan, repeated the comments several times in three Sunday television interviews, though he left deliberately vague whether those consequences would be military, economic or diplomatic. Officials were quick to say they still had not seen any movement in Russia’s stockpile of 2,000 or so small tactical weapons — which can be launched from a short- or medium-range missile — despite President Vladimir V. Putin’s threats in a televised address last week that “this is not a bluff.”

But Mr. Sullivan’s use of the word “catastrophic” as a deliberately ambiguous warning of a major — if almost certainly non-nuclear — response to a Russian nuclear detonation illustrated how quickly the rhetoric has intensified as Russia has faltered on the battlefield in recent months.

In late May, Mr. Biden wrote a guest essay in The New York Times in which he said that “any use of nuclear weapons in this conflict on any scale would be completely unacceptable to us as well as the rest of the world and would entail severe consequences.”

American intelligence officials say they still believe the chances that nuclear weapons will be used in the conflict are low. But they believe those chances are significantly higher than they were in February and March because Mr. Putin has lost confidence in the ability of his ground troops to hold territory, much less take over Ukraine.

Mr. Sullivan is a longtime student of nuclear escalation risks, and he has been walking a fine line between orchestrating repeated warnings to the Russians and avoiding statements that could prompt Moscow to raise the stakes, perhaps by beginning to move weapons toward the border in a menacing show of seriousness.

He indicated as much on ABC’s “This Week” on Sunday. “We have communicated to the Russians what the consequences would be,” Mr. Sullivan said, “but we’ve been careful in how we talk about this publicly, because from our perspective we want to lay down the principle that there would be catastrophic consequences, but not engage in a game of rhetorical tit for tat.”

The White House declined to say who in Russian leadership the officials had communicated with, or to characterize the Russian response. But even before Mr. Putin issued his latest threats last week, the White House and the Pentagon had quietly engaged in detailed tabletop exercises, senior officials say, to think through how the United States and its allies might react to a variety of provocations.

Those varied from a detonation over the Black Sea by Mr. Putin to the actual use of a weapon against a Ukrainian target. The first of those would be more akin to a North Korean nuclear test, intended as a warning shot. The second would be the first use of a nuclear weapon against a population since the United States bombed Hiroshima and Nagasaki in August 1945.

For months, administration officials have said they could think of almost no circumstances in which a nuclear detonation by Russia would result in a nuclear response. But there has been discussion of several non-nuclear military responses — using conventional weapons, for example, against a base or unit from which the attack originated, or giving the Ukrainian forces the weaponry to launch that counterattack. In the minds of many officials, any use of nuclear weapons would require a forceful military response.

But many of the options under discussion also involve nonmilitary steps, casting Mr. Putin as an international pariah who broke the nuclear taboo for the first time in 77 years. It would be a chance, some officials say, to bring China and India, along with much of Asia and Africa, into the effort to impose sanctions on Russia, cutting off some of the biggest markets that remain for its oil and gas.

Mr. Putin’s nuclear threats have hung over the war from its opening days, when he publicly ordered that nuclear forces be placed on a heightened alert status. (There is no evidence it ever happened.) More recently the shelling, apparently by Russian forces, of Ukraine’s Zaporizhzhia nuclear power plant has raised the specter of deliberately turning a commercial facility into a potential dirty bomb. Shelling near the plant has continued in recent days, though the reactors have now been shut down, lowering the risk of a runaway nuclear accident.

On Wednesday, for the first time in more than six months, Mr. Putin revived his nuclear threats, saying he could use all arms available to him in the war — remarks interpreted by officials in both Russia and the West as a veiled threat about the use of nuclear weapons.

“If Russia feels its territorial integrity is threatened, we will use all defense methods at our disposal, and this is not a bluff,” he said. “Those who are trying to blackmail us with nuclear weapons should know that the winds can also turn in their direction.”

Mr. Sullivan said in several interviews that he was taking Mr. Putin’s nuclear threats seriously — saying at one point that the United States was preparing for “every contingency” in the conflict and working to deter Russia from using nuclear weapons.

“We do have the capacity to speak directly at senior levels and be clear about our messages to them,” he said, adding: “Russia understands very well what the United States would do in response to nuclear weapons use in Ukraine because we have spelled it out for them.”

On NBC’s “Meet the Press,” Mr. Sullivan said there would be announcements in the coming days of new economic sanctions from the Group of 7 nations against Russia — including on Russian entities operating in other countries — in response to Moscow’s “sham” referendums in portions of Ukraine it is occupying.

The voting, which ends early this week, is widely believed to be a pretext for Russia to annex those territories.

“We’ve been clear: We’re not going to stop or slow down our support to the Ukrainians, no matter what Putin tries to do with these fake elections and fake referenda and annexation,” Mr. Sullivan said on CBS News’s “Face the Nation.”

Ukrainian and Western officials believe that the rushed voting would open the door for Mr. Putin to claim that Kyiv’s defensive war was an attack on Russian territory.

On Sunday, President Volodymyr Zelensky of Ukraine reiterated that annexation by Moscow would scuttle any fleeting hopes for a diplomatic resolution to the crisis.

“What we are seeing are signs of unbelievable struggle among the Russians,” Mr. Sullivan said.

“You’ve got low morale, where the soldiers don’t want to fight. And who can blame them because they want no part of Putin’s war conquest.”

He continued: “You’ve got Russia disorganized and losing territory to a capable Ukrainian force. And you’ve got a huge amount of infighting among the Russian military leadership. And now the blame game has started to include these replacements.”