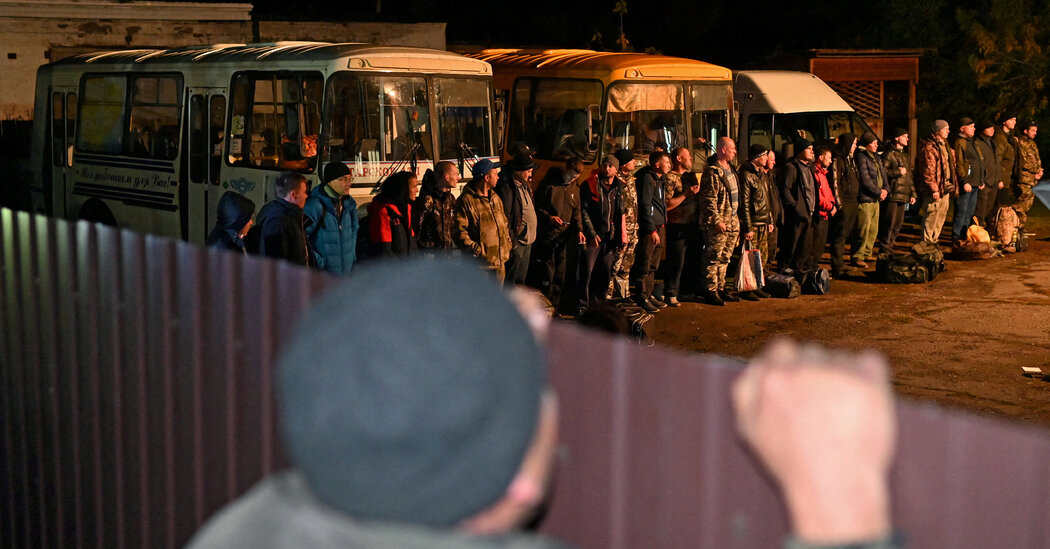 In a rare admission of official mistakes, the Kremlin acknowledged on Monday that its new military draft to reinforce the Russian assault on Ukraine has been rife with problems. The admission occurred the same day that a man, apparently distraught over the mobilization, shot and seriously wounded a recruitment officer at a draft office in Siberia.

Since President Vladimir V. Putin of Russia announced a “partial mobilization” last week to call up 300,000 people with military experience to join the fight, there have been widespread reports of conscription in rural regions that has swept up ethnic minorities and, it appears, people unfit for duty.

Protests have erupted in far-flung cities, recruitment centers have been the target of arson, and thousands of military-age men have packed planes and vehicles to flee across Russia’s borders.

The Kremlin’s spokesman, Dmitri S. Peskov, acknowledged on Monday that there had been irregularities in the call-up, but he tried to shift blame to the local authorities carrying out the mobilization among resistant civilians across the country.

“There are cases when the decree has been violated,” Mr. Peskov told reporters during a daily phone call. “In some regions, governors are actively working to correct the situation.”

The governors of several Russian regions — including Belgorod, Kostroma, Vladimir, Yakutia and Magadan in the far east — have acknowledged that men who did not meet the defense ministry’s criteria are being called up.

Mr. Peskov said the problems were being addressed.

“These cases of noncompliance with the required criteria are being eliminated,” he said, “and we hope that the rate of elimination will increase and all errors will be corrected.”

In the eastern region of Irkutsk, the authorities arrested a suspect in the shooting at the draft office. He was identified as Ruslan Zinin, and described as being in his mid-20s.

Mr. Zinin’s mother, Marina Zinina, told a local news outlet that her son had become angry after a close friend received a draft summons despite having never served in the Russian Army. The defense minister pledged last week that only men with military experience and a specialization would be called up.

“Ruslan was very upset because of this,” Ms. Zinina was quoted as saying. “They said that there would be partial mobilization, but it turns out that they are taking everyone.”

For months, Mr. Putin resisted a draft, seeking to preserve a sense of normalcy in Russia. But with his forces were routed in northeastern Ukraine this month and with criticism rising from nationalist and pro-war voices, Mr. Putin has moved to escalate the war effort.

The sudden reversal surprised many Russians and led to widespread rumors that the authorities would close the borders to keep men of military age in the country. But since last Wednesday, an estimated 261,000 men have fled Russia, according to the independent newspaper Novaya Gazeta, which cited sources in the Russian security services.

With Russia’s military fighting to hold off Ukrainian advances in the east and south, tens of thousands of draft notices have been issued, and analysts say they believe that many recruits will soon be sent to the front lines. But because of Russia’s supply problems and heavy casualties in the war, the analysts say, the Kremlin will most likely struggle to train and equip them.

“The lack of military trainers, and the haste with which Russia has started the mobilization, suggests that many of the drafted troops will deploy to the front line with minimal relevant preparation,” Britain’s defense intelligence agency said on Monday. “They are likely to suffer a high attrition rate.”

Michael Kofman, the director of Russia studies at C.N.A., a defense research institute based in Virginia, said on Monday that the regional agencies calling up Russian men were trying to fill quotas and, apparently, conscripting them without regard to qualifications.

“At first, it obviously looks like a hot mess,” he told the podcast “War on the Rocks.” “That’s very much true, but they are also pulling in quite large numbers of men.”

Russia’s goal, Mr. Kofman said, appears to be getting troops quickly to the battlefield to stabilize its defensive lines and prevent another Ukrainian counterattack before winter sets in. He said a large enough draft could bolster Moscow’s ability to sustain the war, but noted that because the military had already deployed officers and enlisted professionals months ago, it lacked trainers for the new draftees.

“I think they’re going to, at best, get two weeks of refresh or some kind of familiarization training before being sent off,” Mr. Kofman said. “We’re very much in uncharted waters regarding the implications of it and how it will go.”

In another acceleration of the incursion into Ukraine, Moscow and its proxies in four occupied Ukrainian regions began staging referendums last week on becoming part of Russia. Much of the world has condemned the vote as a sham.

On Monday, Ukraine denounced reports that Ukrainian prisoners of war were being forced to vote in the referendum. Videos from the occupied regions, supported by witness accounts, have shown armed Russian soldiers escorting people to vote. Ukrainian officials have said that residents have been threatened with losing their jobs if they did not cast a ballot, and they have accused the occupying authorities of busing in people from outside Ukraine to stage voting scenes.

The results of the staged vote across the four regions, which amount to an area larger than Portugal, are expected to be announced on Tuesday. The Kremlin is then expected to formally announce the annexation of the regions, a move, analysts say, that may give Moscow another pretext to escalate the war. President Volodymyr Zelensky of Ukraine has warned that the annexation would allow Mr. Putin to claim that he is fighting a defensive war.

“He wants to scare the whole world,” Mr. Zelensky said. “These are the first steps of his nuclear blackmail.”

Officials in the Biden administration have expressed concern that Mr. Putin could detonate a tactical nuclear weapon on Ukrainian territory or perhaps in a demonstration blast over the Black Sea or the Arctic Ocean. Officials said on Sunday that while they took the threat seriously, there has been no evidence of Russia’s moving those weapons or preparing such a strike.

Jake Sullivan, the U.S. national security adviser, echoed previous private and public warnings that President Biden and his top aides have made to their Russian counterparts.

“We have communicated directly, privately, at very high levels to the Kremlin that any use of nuclear weapons will be met with catastrophic consequences for Russia, that the United States and our allies will respond decisively,” Mr. Sullivan said on the CBS program. “We have been clear and specific about what that will entail.”