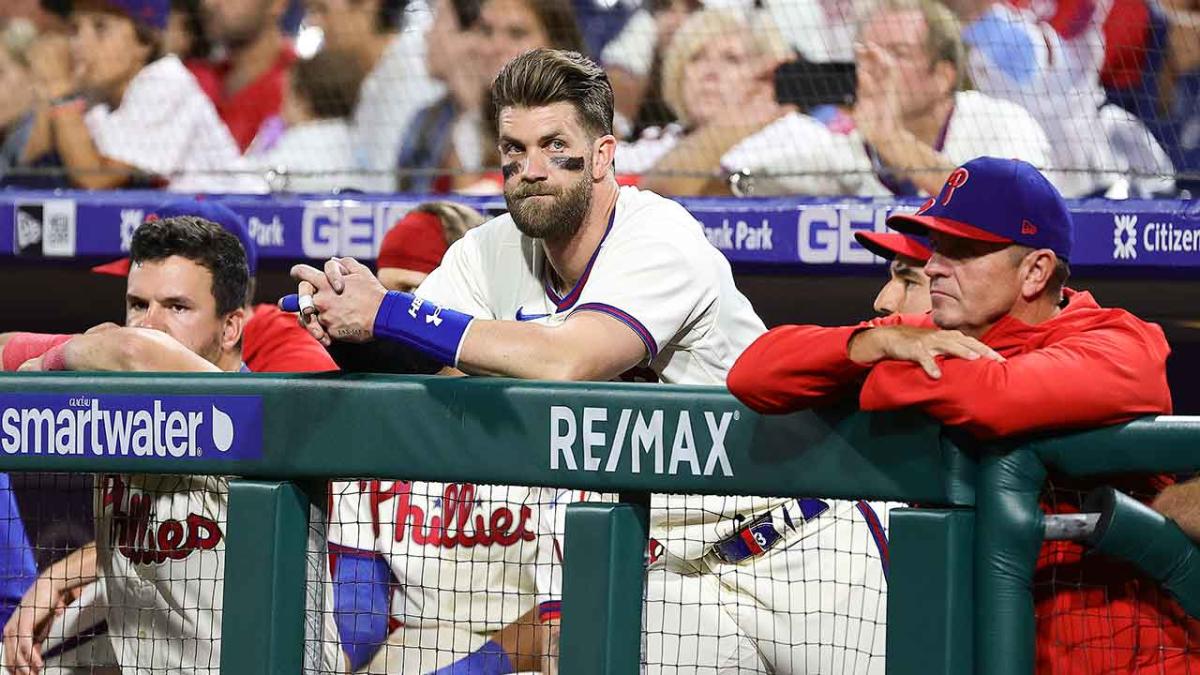 The Phillies missed a golden opportunity in their final home game of the 2022 regular season, losing 8-7 to the Braves in 11 innings.

The Brewers had lost earlier in the day to the Reds, decreasing the Phillies’ magic number to 8. A win Sunday would have given the Phillies a 2½-game lead — really a 3½-game lead since they own the tiebreaker — over Milwaukee. It would have put the Phils in a position where they could have gone 4-6 the rest of the way and the Brewers would have needed to go 7-2.

One game can make a huge difference this time of year.

The Phillies came back multiple times on a plodding afternoon. The game was 4 hours, 9 minutes and that’s excluding a rain delay of 2 hours and 9 minutes.

Atlanta scored twice in the first inning on back-to-back two-out doubles. The first was lost in the sun by center fielder Brandon Marsh, who wasn’t wearing sunglasses.

The Phils responded immediately with a leadoff homer from Kyle Schwarber and three first-inning runs.

Schwarber homered again in the third inning, his 42nd, to break a tie. The Phils took a fifth-inning lead on consecutive sacrifice flies before the skies opened and everyone was forced to sit around for the length of a Sergio Leone movie.

The Phils had their chances — two men on in the eighth, a runner in scoring position with two outs in the ninth, two on in the 10th, the winning run at the plate in the 11th.

“We’re still in the driver’s seat, we still like where we’re at,” starting pitcher Kyle Gibson said. “We’re playing good baseball for the most part. That’s a pretty good team over there and we had them on the ropes for mostly the whole series. I feel good about how we’re throwing it and how we’re swinging it.”

The Phillies split the four games and finished 8-11 this season against Atlanta, a team they could face in the first round of the playoffs if they close the 1½-game gap on the Padres.

“I think we match up well,” manager Rob Thomson said. “They’ve all been pretty good games. Tonight’s game was a good baseball game, it really was. Exciting, back and forth, back and forth.”

This was a hugely important weekend series for both teams. The Phillies are trying to capture their first playoff berth since 2011, while the Braves are trying to catch the Mets in the NL East. Despite winning the final two games, Atlanta’s deficit grew this weekend by a half-game. They’re two back of the division lead and a first-round bye.

“Two good teams going at it and it was hard-fought, we didn’t quit ’til the end,” Schwarber said. “We want to walk away with it, absolutely, but it is what it is. We’re going to be better and we’re going to keep moving forward. It’s in our own hands right now and we’re looking forward to this final push.”

The Phillies finish up with 10 games on the road. They’re off Monday, then have three with the Cubs, four at Nationals Park and three in Houston. The Phils went 47-34 this season at home but are just a game over .500 on the road and have lost 12 of their last 17 away from Philly.

They adjusted their starting rotation for the upcoming series at Wrigley Field, moving Aaron Nola ahead of Ranger Suarez. Nola will start Wednesday rather than Thursday, which allows him to start again in Game 160, then in Game 2 of a playoff series on regular rest.

“We’re still really confident going into this road trip,” Gibson said. “It’s weird, ending on the road and then you’re going to be on the road somewhere else. Everybody’s packed heavy.”

Here comes the final stretch. Will it end with a clubhouse fiesta or in massive disappointment?