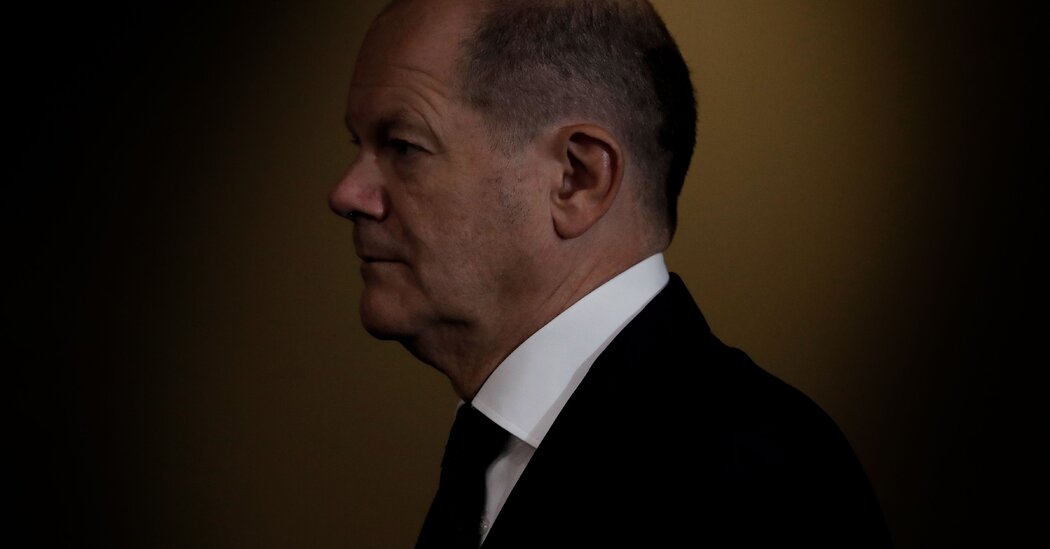 NEW YORK — Chancellor Olaf Scholz of Germany gets right to the point when asked why his country will not send battle tanks to Ukraine: It is “a very dangerous war,” he said.

Ukraine has made gains recently against Russia, which invaded the country in February, and has been asking the West for reinforcements. But Germany has declined to lead the way in sending that aid.

“We are supporting Ukraine,” Mr. Scholz said last week in an hourlong interview with The New York Times. “We are doing it in a way that is not escalating to where it is becoming a war between Russia and NATO because this would be a catastrophe.”

For Mr. Scholz, a Social Democrat who took over as chancellor from his longtime predecessor Angela Merkel less than a year ago, the way Germany has assisted Ukraine militarily has become something of a litmus test of his — and his country’s — ability to lead Europe through the continent’s most significant security crisis since World War II.

Mr. Scholz is not the only one concerned about the danger of escalation. After President Vladimir V. Putin of Russia last week announced a mobilization of roughly 300,000 reservists and his intentions to annex parts of eastern Ukraine, and after he implicitly threatened the use of tactical nuclear weapons, worries about a direct Russia-NATO clash have begun to rise among Kyiv’s Western backers, making it harder to reconcile the twin goals of avoiding such a confrontation and continuing to strengthen Ukraine’s hand in the battlefield.

In the early days after Russia’s attack on Ukraine on Feb. 24, Mr. Scholz, a former finance minister with little foreign or defense policy experience, won widespread applause when he announced a rearmament program worth around $100 billion and overturned a ban on arms exports to conflict zones, breaking with decades of German pacifism.

It was a revolution in a country, now Europe’s biggest democracy, whose Nazi past had long made it reluctant to invest in military power, something Mr. Scholz was not shy to claim credit for.

“We changed that, and since then, we delivered a huge mass of very effective weapons to the Ukrainians,” he said. Germany, he said, was “really doing a lot.”

Mr. Scholz certainly has come a long way since the eve of Russia’s invasion, when his government offered Ukraine 5,000 helmets and a field hospital. But it took months and the threat of a parliamentary vote before he approved any shipments of heavy weapons.

So far, seven months into the war, Berlin has pledged over 700 million euros’ worth of military aid, or about $678 million, to Ukraine, including a modern air defense system. It has also sent multiple rocket launchers, sophisticated artillery and dozens of antiaircraft guns, which contributed to Ukraine’s stunning recent advance on the battlefield when in the space of six days its forces took back more territory than Russia had grabbed in six months.

But Mr. Scholz has refused to provide Ukraine with Leopard battle tanks or Marder infantry fighting vehicles, which Ukrainian officials have repeatedly asked for. As they pivot from a defensive posture to an offensive one in the south, Ukrainian forces need tanks to break through defensive lines and recapture more territory before winter and, as Ukraine’s foreign minister, Dmytro Kuleba, put it, “liberate people and save them from genocide.”

Mr. Scholz’s refusal — which goes against the will of many even inside his own governing coalition — has earned him noisy and near-unanimous criticism among Germany’s Eastern European neighbors, not least in Ukraine. Commanders along the front say the Germans’ reluctance to provide battle tanks points to a policy of seeking a negotiated settlement along existing lines, rather than a Ukrainian success in pushing out the Russians.

“Not a single rational argument on why these weapons can not be supplied, only abstract fears and excuses,” Mr. Kuleba said recently on Twitter. “What is Berlin afraid of that Kyiv is not?”

Pressed on that question in the interview with The Times, Mr. Scholz bristled.

“Leadership does not mean you do what people ask you,” he said. “Leadership is about taking the right decisions and to be very strong. And this is what I’m doing.”

“We are cooperating and we are doing it together with our allies, and we are never doing something by ourselves alone,” Mr. Scholz added. “And this is the way we react to a very dangerous war.”

“It is absolutely wise never to do something just by yourself,” he said.

In the interview, Mr. Scholz rejected any suggestion that the United States might in fact welcome Germany’s stepping up and taking the lead on sending battle tanks, which are cumbersome to transport, especially across an ocean.

But after Ukraine’s successful counteroffensive, the U.S. Embassy in Berlin posted on Twitter what many interpreted as a veiled invitation to Germany: “We call on all allies and partners to lend as much support as possible to Ukraine in its struggle for democratic sovereignty,” the embassy tweeted. “The decision on the type of aid ultimately lies with each country.”

This month’s battlefield gains by Ukrainian forces have only added to the pressure on Mr. Scholz, whose government has cited different reasons at different times for not sending tanks.

After Mr. Scholz’s defense minister, Christine Lambrecht, said this month that Germany had to hold onto its tanks to fulfill its obligations to NATO, the alliance’s secretary general, Jens Stoltenberg, said that arming Ukraine was more important.

“By ensuring that Russia, that President Putin, does not win in Ukraine, we are also increasing our own security and strengthening the alliance,” Mr. Stoltenberg said.

Even within Germany, impatience has been building.

“All of Europe is waiting for Germany to make the first step,” said Marie-Agnes Strack-Zimmermann, a member of the Free Democrats, one of the three parties in Mr. Scholz’s coalition government, and the head of the parliamentary defense committee.

Mr. Scholz’s caution was also evident during the interview in his reluctance to detail his own vision for how the war might end, preferring instead to cite a guest essay by President Biden that The Times published in May.

In the essay, Mr. Biden quoted President Volodymyr Zelensky of Ukraine, who at the time had said that ultimately the war would “only definitively end through diplomacy.” Mr. Biden wrote that the West did not seek war between NATO and Russia, but that the military support it was sending to Ukraine was meant to prepare and strengthen Kyiv’s hand when the time for diplomacy came.

“I very much appreciated what President Biden wrote in The New York Times,” Mr. Scholz said. “If you want me to subscribe to this article, I will do that. I can go with any sentence.”

The announcement that Mr. Putin made last week that he was calling up roughly 300,000 reservists and was moving ahead with annexing part of eastern Ukraine showed that he was “desperate,” the chancellor said, adding that it also showed that Mr. Putin had underestimated Ukraine’s ability to fight back and the West’s unity in supporting Kyiv.

But he would not utter the word “victory” at all, let alone define it.

Did he want Ukraine to win? “Russia can’t win,” was as far as he would go.

For a chancellor with a robotic manner that long ago earned him the nickname “Scholz-o-mat,” there were moments during the sometimes tense interview with The Times when Mr. Scholz was surprisingly emotional when reacting to questions that challenged him. Several times, he berated journalists for asking those.

Asked why Germany will still not spend 2 percent of gross domestic product on military spending in the next couple of years, as Mr. Scholz has said it would, he snapped: “Asking that question is not serious, to be very honest.”

Germany’s chancellor is not the only one hesitating to send sophisticated weapons systems to Ukraine.

Calls by Mr. Zelensky for American long-range guided missiles have so far gone unanswered, too.

But Mr. Putin’s veiled threat last week of a tactical nuclear strike when he was announcing the force buildup and promising to see the war through has been resonating in Berlin.

“Unfortunately, nuclear blackmail seems to be working in Germany,” said Claudia Major, the head of security policy at the German Institute for International and Security Affairs in Berlin.

“If the chancellor is serious about leading, he will have to show initiative and, yes, step up,” Ms. Major said. “Doing a lot and leading is not the same thing.”