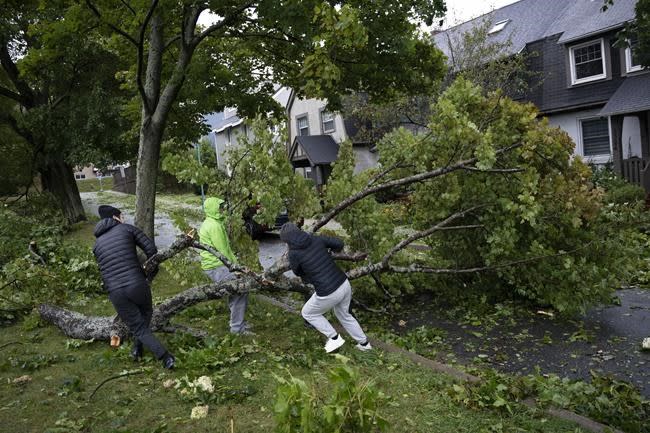 SYDNEY, N.S. — Post-tropical storm Fiona, one of the strongest storms to ever strike Eastern Canada, left a trail of destruction in its wake early Saturday before lingering over western Newfoundland, where a record-breaking storm surge destroyed several homes.

The devastation sent local officials scrambling amid widespread power outages and washed out roads, while Prime Minister Justin Trudeau said the federal government would be deploying members of the Canadian Armed Forces at the request of Nova Scotia and will do the same for other provinces that ask for help.

Police said they had received reports of two people in Port aux Basques, N.L., being swept out of residences that collapsed into the sea as Fiona hit. RCMP Cpl. Jolene Garland said one woman was rescued by local residents and is believed to be fine after receiving medical attention.

“We have a report about another woman who was believed to be swept out into the ocean as her residence was damaged as well — apparently swept out from the basement,” Garland said. “We haven’t been able to verify a status on that woman.”

She said Saturday’s stormy conditions made it too dangerous for searchers to try finding the woman.

Fiona was centred over the eastern Gulf of St. Lawrence Saturday evening and was expected to track northeast, reaching the lower north shore of Quebec and southeastern Labrador overnight. Severe winds, large waves and storm surges continued over parts of eastern Nova Scotia, the Gulf of St. Lawrence and western Newfoundland.

Trudeau cancelled his planned visit to Japan for the state funeral of former prime minister Shinzo Abe to instead focus on supporting Canadians affected by the storm, he said.

The federal government will match any donations to the Canadian Red Cross by individuals and corporations over the next 30 days, he added.

Trudeau also said he will visit as soon as possible, while noting he doesn’t want to displace any emergency teams who are focused on important work on the ground.

“Recovery is going to be a big effort. We will be there every step of the way,” Trudeau said.

Defence Minister Anita Anand said the military began preparing to respond before receiving the request for assistance from Nova Scotia.

She did not say how many troops would be deployed, but said reconnaissance is underway to ensure they go where and when they are needed most. They will help with tree and debris removal, restoration of transportation links and more, she added.

Although some storm-related winds were expected to persist through the evening in parts of Newfoundland, the coastal community of Port aux Basques felt Fiona’s effects early.

Rene Roy, editor of the town’s weekly newspaper, said he saw evidence that nine homes, including a two-storey apartment building, were washed out to sea by a massive storm surge and wind-driven waves that soared about 25 metres into the air.

Port aux Basques Mayor Brian Button pleaded with residents not to roam around and urged those at risk to seek higher ground, noting some houses had already been washed away.

“So anybody that’s being told to leave their homes, you need to leave,” Button said during a Facebook Live broadcast. “There are no ifs, ands or buts.”

Later Saturday, he warned against returning home but instead to seek shelter at an elementary school amid forecasts of further storm surges.

“We’ve got a total war zone out there, we’ve got destruction everywhere,” he said.

Fiona was churning out hurricane-force winds at about 150 kilometres per hour when it made landfall between 3 a.m. and 4 a.m. in eastern Nova Scotia, between Canso and Guysborough. The brawny storm knocked out power to more than 500,000 homes and businesses across the Maritimes.

The Canadian Hurricane Centre in Dartmouth, N.S., said Fiona set an unofficial record for the lowest-ever barometric pressure for a tropical storm making landfall in Canada. The recorded pressure at Hart Island was 931.6 millibars.

“The pressure of a storm is a very good indication of its intensity — how strong and intense the winds will be,” said meteorologist Ian Hubbard. “The deeper the pressure, the more intense it’s going to be.”

Bob Robichaud, warning preparedness meteorologist with the hurricane centre, said during a press conference the hardest hit areas of southwestern Newfoundland lay in the path of the strongest winds on the edge of the storm.

“The same winds that went through Cape Breton in the early hours of this morning are now going through the Port aux Basques area. That, coupled with the fact that they’re wide open to the incoming surf and storm surge, that’s why you’re seeing what you’re seeing there now,” Robichaud said.

Other Nova Scotian officials described the breathtaking impacts of the storm that brought flying debris, snapped power poles and trees across roadways and cut power to three-quarters of provincial residents as of Saturday afternoon.

In Halifax, 160 people were evacuated from two apartment buildings that were severely damaged, including one with a collapsed roof.

Nova Scotia Premier Tim Houston said the province requested both military and disaster assistance from the federal government and support from Ontario through a mutual aide agreement. The province is urgently working to get power, phone and internet service back up and running, he said.

The Halifax Stanfield International Airport reported a gust of 109 km/h at 3 a.m., and a gust hit 135 km/h at the mouth of Halifax Harbour. A gust also reached 161 km/h over Beaver Island, N.S., which is along the province’s eastern shore. In Sydney, N.S., gusts hit 141 km/h at 3 a.m. local time, causing severe damage to some homes.

“We’ve had several structural failures,” said Christina Lamey, a spokeswoman for the Cape Breton Regional Municipality, adding no one was hurt. She said it was unclear how many homes had been damaged, but there were reports of collapsed walls and missing roofs.

Several dozen people in Sydney were forced to move into a shelter set up inside a downtown hockey arena.

Arlene and Robert Grafilo fled to Centre 200 with their children after a massive tree fell on their duplex apartment, trapping them in their basement unit.

“We heard a lot of noise outside and then we realized that there are a lot of cracks in the house and we looked outside and saw the tree had fallen,” said Arlene Grafilo, 43, as her children — ages 3 and 10 — played in a waiting area set up by the Red Cross.

“We were trapped and we couldn’t open the doors and the windows, so that’s when we decided to call 911. The children were scared,” she said, adding firefighters eventually rescued them.

Conditions weren’t much better on Prince Edward Island, where officials recorded wind gusts of up to 110 km/h around 2:30 p.m. local time.

That was down from levels of up to 170 km/h recorded earlier in the day, and Premier Dennis King said the island was also hit by two-metre storm surges, widespread flooding and downed power lines that left about 95 per cent of provincial residents in the dark.

But while he said it’s still too early to fully gauge the extent of damage across the Island, he said early indications already make it clear that Fiona dealt an unprecedented blow.

“It seems that few communities, large or small, have been spared,” King said at an afternoon news conference.

In Charlottetown, where the city urged residents to stay off the streets, Fiona left a trail of debris, downed power lines and uprooted and splintered trees in its wake. Gas pumps were pulled from foundations, power lines twisted and fallen and mailboxes blown over.

Lena Caseley, a Charlottetown resident who has been living in the Parkdale neighbourhood since 1993, said she’s never seen anything that compares with the Fiona’s fury and destruction.

On Saturday afternoon, Caseley surveyed the damage on her street.

“It’s going to be a long time recovering from this,” she said.

Steve Clements, who spent the night at Jack Blanchard Hall, one of Charlottetown’s temporary shelters, said he was thankful to be “out of the elements.” He said it was loud and hard to sleep, but “it’s better than the alternative. It’s better than being out.”

Meanwhile, parts of eastern Nova Scotia and Prince Edward Island had recorded 75 to 150 millimetres of rainfall. Final totals have yet to be tallied.

This report by The Canadian Press was first published Sept. 24, 2022.

— With files from Michael MacDonald in Halifax, Hina Alam in Charlottetown, Sidhartha Banerjee in Montreal and Amy Smart in Vancouver.