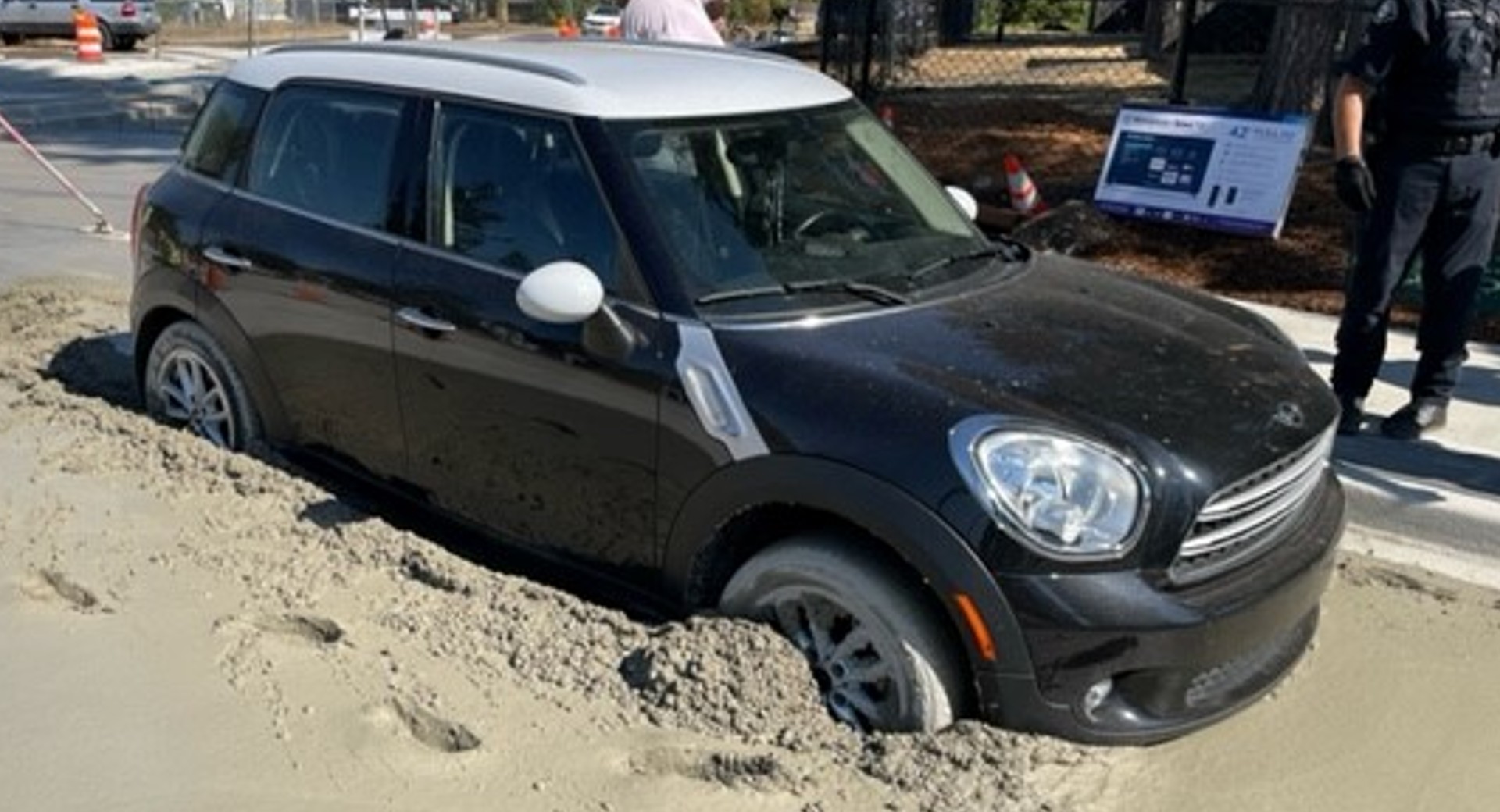 A report out of Lakewood, Washington, about 40 miles (64 Km) south of Seattle, says that a woman recently drove a stolen MINI Cooper Countryman into wet concrete before getting it completely stuck in the building material. She ditched the car but it’s what she took with her that’s truly unbelievable. According to police, witnesses saw the woman throw a number of items out of the vehicle before fleeing with a child and a bottle of whiskey.

Authorities responded to a call about the incident on the corner of Winona St SW and Edgewood Ave at 1:53 a.m. Q13Fox says that after getting stuck in the wet concrete that the unnamed 32-year-old woman tossed an Instant Pot, a TV, and a half-empty bottle of whiskey out of the British four-door before exiting the vehicle herself with her four-year-old child.

The pair then left the scene but were later found by police thanks to a city inspector who followed the mother and child while calling 911. For its part, the city cheekily alerted citizens to the incident on its Twitter account. On Monday, it tweeted “Thanks to a series of poor choices by an individual (including driving a stolen car with a bottle of whiskey in hand) our pavement pouring at the North Gate Rd/Edgewood Ave roundabout is setback.”

There’s a reason why ROAD CLOSED signs are up and detours are in place. Thanks to a series of poor choices by an individual (including driving a stolen car with a bottle of whiskey in hand) our pavement pouring at the North Gate Rd/Edgewood Ave roundabout is setback. pic.twitter.com/x2iJO5GBrB

Photos taken at the scene show the construction area and the tracks where the MINI Cooper entered the newly poured roundabout. Just before exiting the site, it got stuck with concrete up to the sides of the doors. It’s no wonder that the suspect threw things out of the window.

According to the report from Q13Fox, the suspect stole the items and the car itself from her own mother before the incident. Her arraignment hearing in Lakewood Municipal Court included charges of negligent driving, hit-and-run property damage, two counts of third-degree domestic violence, and driving under the influence.

According to the city’s Facebook page, the paving project wasn’t delayed despite the obvious need for extensive repairs. Commenters on the post believe that the child was actually kidnapped by the woman before the incident occurred.