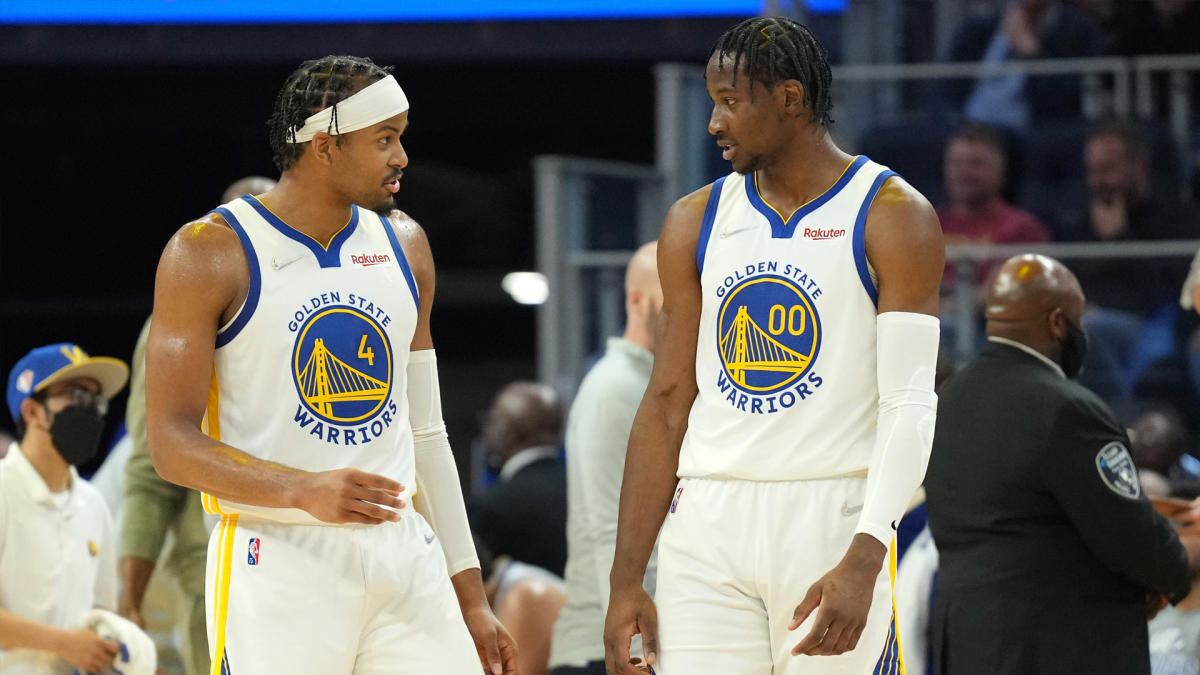 It’s not that Kerr isn’t happy with the roster that general manager Bob Myers and the rest of the front office have given him. It’s the fact that the defending champions still are chasing a two-timelines dream with hopes of another title and are extremely deep, breeding competition at multiple positions.

“Only way I’m looking at it right now is our top six are really clear,” Kerr said Thursday at Chase Center. “But like last year, there will undoubtedly be injuries and things will happen and our lineup will change based on circumstance.

“But those six guys are going to play a ton. It’s too hard to say right now, are we going to start the exact same way every single game. We have to see how it all shakes out. I think what’s really more the story is what happens after those six.

“We know those guys are all going to play a ton, but from what happens from there, to me, it’s wide open.”

Coming off a championship, the Warriors will rely on three young players in James Wiseman, Jonathan Kuminga and Moses Moody to step their games up with bigger roles. Wiseman (21 years old) is the oldest of the trio. He also has played the least amount of NBA games.

Since being taken with the No. 2 pick in the 2020 NBA Draft, Wiseman has only played 39 NBA games and none last season. He has played in three G League games and four summer league games. Here’s the good news: After two years of more downs than ups, everything is trending in the right direction for the young center.

The 7-footer participated in his first summer league this year, despite going into his third year as a pro. And this will be his first training camp as well, missing the first two to injuries and COVID. For Wiseman, it’s all about reps, reps, and more reps. Luckily for him and the Warriors, that’s exactly what he got this offseason.

“The good news is, he’s played a lot this summer, and every day, in my opinion, he seems to be getting a little bit better every day,” Warriors general manager Bob Myers said Thursday. “And he can’t do that if he’s not healthy, but he’s been healthy. We track the pick-up games and he’s the only one in the facility that played in every one, which is nice.

“… It shows work ethic, but also a health component that he didn’t miss anything. There’s no swelling. Happy that he’s healthy. Now he can start the work, and we’ve — I’m sure you asked Steve but we bet on it. It’s really about defining his role, putting him in positions to succeed. And I imagine you’ll see — I’m hoping as the training camp goes on, as the season goes on, he just keeps getting a little bit better, reading coverages and understanding our schemes.

“It even took [Andrew Wiggins], who was healthy, if we are being honest, a couple years to learn how to play with our guys and looked like it finally clicked last season. It’s not a system — some players can drop right into it — but for many, it takes a little while to figure out.”

Moody, at 20 years old, is the second-oldest of the three and already sees the game like a seasoned veteran. Kerr showed trust in the former lottery pick under bright lights last season when he stepped in and was given Gary Payton II’s minutes in the Western Conference finals while GP2 was still shelved to his elbow injury. Moody didn’t disappoint.

Listed at 6-foot-6 with a 7-foot-1 wingspan, Moody can slide between being a guard and wing and Kerr knows the Warriors’ rhythm won’t get off whack with the Arkansas product on the floor. The opportunity to make a major leap is right there in front of him.

“Moses has a great shot right now to really take a spot in the rotation and make himself a really big part of this year’s team,” Kerr said.

Kuminga, who doesn’t turn 20 until Oct. 6, still has questions surrounding him, though many recently have been debunked by Kerr. On potential and skill set alone, it’s impossible to keep him off the court. The Warriors want him to continue focusing on running the floor, rebounding, playing sound defense and taking advantage of his physical abilities.

If he checks all those boxes, watch out.

Then there are the Warriors’ signings in free agency. Though they lost a handful of players, including Payton and Otto Porter Jr., new additions in Donte DiVincenzo and JaMychal Green should slide in easily. Kerr can’t wait to get to work with those two.

“We have JaMychal and Donte, who have been a big part of rotations for great teams in this league. I have a lot of faith they will be able to come in and contribute at a high level, and we have got all these young guys fighting for spots.

“I’m excited about the competition that’s ahead.”

RELATED: Warriors fueled by perpetual disrespect in quest to repeat

None of the above includes Patrick Baldwin Jr. or Ryan Rollins, the Warriors’ top two picks in this year’s draft. The organization is high on both players, and while they’re expected to see plenty of time with the Santa Cruz Warriors, they’ll get their chance with the big squad at some point.

Oh yeah, then there’s Andre Iguodala. He announced Friday morning on his podcast, Point Forward, that he’s back for one final season as well. The farewell tour begins Saturday with the opening of his final training camp.

The Warriors are deep, more than a season ago, and their mixture of youth and experience will be competing on a daily basis to keep the Larry O’Brien Trophy home in The Bay. The more competition, the better — giving Kerr a problem every coach would beg for.