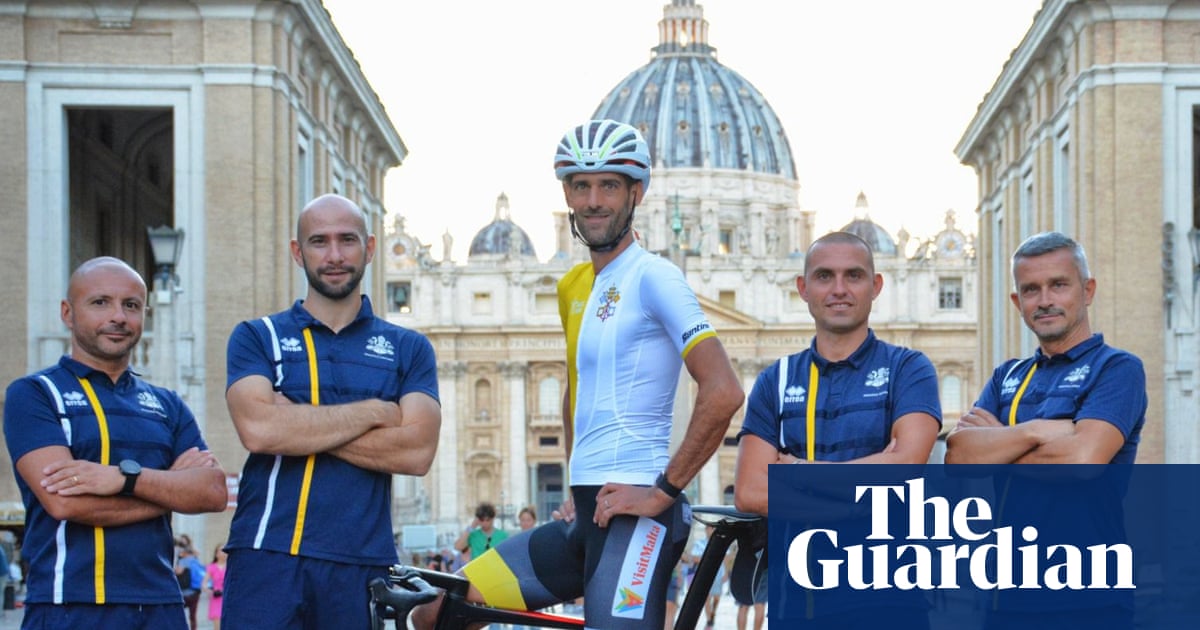 When Rien Schuurhuis rolls out for the men’s road race at the UCI Road World Championships on Sunday, he will bring a novel and some might even say holy presence to the most-significant one-day race on the global cycling calendar.

Schuurhuis will cut a lonely figure in a peloton of almost 200 cyclists, from a few dozen nations, but for the first-time in cycling history the Vatican City will be racing for the sacred rainbow jersey.

Last year, the Vatican – the small independent city-state in Rome, Italy governed by the Catholic Church – joined cycling’s global body, the UCI. The move came following the establishment of Athletica Vaticana in 2018 to pursue sporting opportunities for Vatican employees, citizens and their family members. The initiative has support from the top, with Pope Francis officially endorsing the team.

Schuurhuis, 40, is a Dutch-Australian who moved to the Vatican two years ago with his wife, Australia’s Ambassador to the Holy See, Chiara Porro. He has previously ridden for semi-professional teams across Asia, including a year with Australian outfit Oliver’s Real Food. His best results include several top 10 stage finishes at races in Indonesia and Malaysia; he finished 40th in the individual time trial at last year’s Dutch national championships.

“It’s very special and I am very honoured that I was the chosen one for this event,” Schuurhuis told Guardian Australia on Friday. “But we really do this as a team – there are three representatives with me here, and I’m just doing the riding. Everything around it is done by the whole team. We’re very proud.”

One of Schuurhuis’s colleagues on his trip to Australia, Valerio Agnoli, Vatican Cycling’s external relationship manager, is a former pro who rode for teams including Astana and Bahrain–Merida, supporting the likes of Vincenzo Nibali.

Athletica Vaticana was established by the Pope, Schuurhuis says, “with the aim of using sport as a vehicle to promote inclusion and fraternity, bringing people closer together. On the sports field – on the road in this case – everyone has the same goal. It doesn’t matter what background you come from, what religion, what age – everyone is the same.”

The cyclist says that after arriving in Rome, Schuurhuis was taken by this purpose of Athletica Vaticana. “I became part of the team and a few months ago they asked me if I wanted to go to the world championships,” he says. “I was very honoured.” Schuurhuis is eligible to represent the Vatican because his wife, the Australian Ambassador, works at Holy See.

In addition to cycling, the trip to Australia has a diplomatic component. On Friday, the Vatican delegation visited Caritas Australia, a charitable arm of the Catholic Church, to learn about truth-telling and reconciliation with First Nations Australians. They met with Uncle Roger Jarrett, a survivor of Kinchela Boy Home (a notorious institution where members of the Stolen Generation were forcibly taken).

“This mission is part of our trip – it’s very important for the Vatican to engage in this and spread this message,” Schuurhuis said. They were also greeted by Archbishop Charles Balvo, the new Apostolic Nuncio papal envoy to Australia.

On the road, Schuurhuis says that he hopes to grow the Vatican peloton in the years to come. The UCI has recently added a mixed time trial relay, featuring three women and three men, to the world championships schedule. It has become a focus for smaller cycling nations – this year, Tahiti, New Caledonia and Samoa all entered the race.

“It was great to see [my friends] here,” Schuurhuis says (he and his wife previously spent time living in the Pacific). “My dream would be to have a Vatican mixed relay team, given it is a team effort.” But on Sunday, it will just be Schuurhuis – a lone representative from the Vatican in the international peloton.

While larger cycling nations will have full teams (Australia is entering a squad of eight riders), Schuurhuis will have to battle solo across the gruelling 267-kilometre course, featuring almost 4,000 metres of elevation. “Just being there at the start-line is the message we want to be bringing across,” he says.

In a speech to a cycling congress in 2019, Pope Francis drew comparisons between religion and the sport. “During the races the whole team works together and when a companion goes through a moment of difficulty, it is his teammates who support and accompany him,” he said. “So in life, too, it is necessary to cultivate a spirit of altruism, generosity and community to help those who have fallen behind and need help to achieve a certain goal”.

Schuurhuis will have these words, and the support of the wider Catholic world, behind him on Sunday. But if he is dropped on the punishing Mount Keira climb, there will be no-one on the road to help him – no Vatican team-mate. He might instead pray for divine intervention. A holy rouleur?