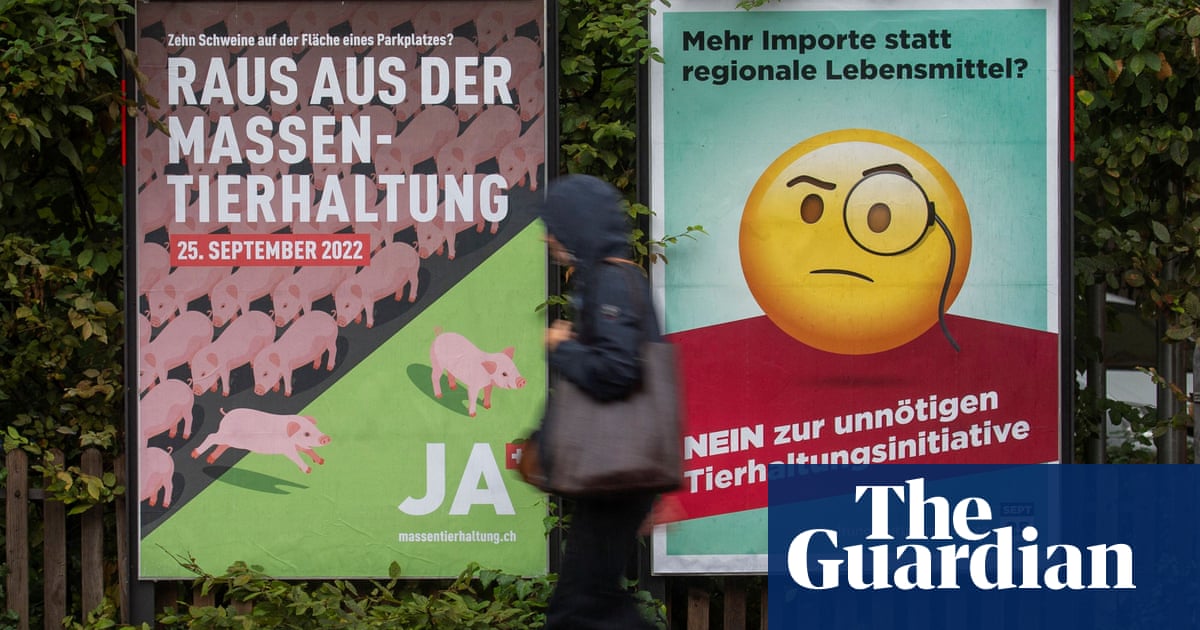 Swiss voters will vote on Sunday on whether to ban factory farming as unconstitutional and end imports of intensively farmed meat.

The latest polling shows 52% of voters oppose a ban, and 47% support one. If the factory-farming ballot initiative is passed, Switzerland’s constitution, which already protects the “welfare and dignity of animals”, would be modified to include an animal’s right “not to be intensively farmed”, and new laws would lower animal stocking rates to meet organic standards.

Under current Swiss law, “you can keep 27,000 chickens in one barn and their room to move is about the size of an A4 sheet of paper,” said Silvano Lieger, managing director of the animal protection group Sentience Politics, which proposed the vote in 2018.

“Pigs are kept in barns too, up to 1,500 per farm, with 10 pigs sharing the space of an average parking spot. It is not possible to treat animals in a dignified way in those conditions,” he said.

A ban would protect the environment by reducing reliance on soya-based animal feed linked to deforestation, said Lieger, who also pointed to the need to reduce the consumption of animal proteins.

His team calculates that only 5% of farms would be affected by the potential ban. Although no exact figures exist for the proportion of small farms in the country, the overall number of Swiss farms is declining while farm size is increasing, according to the national statistics office.

A campaign against the ban, spearheaded by the Swiss Farmers’ Union (SBV), argues that existing laws limiting farm animal numbers mean intensive farming in Switzerland does not exist.

For pigs and cows, Lieger said, the ban would have no maximum limits. Instead, animals would be kept in small groups, have indoor and outside space, and the opportunity to play, he said.

Opponents of the ban say it will fail to prevent cheaper imports of factory-farmed meat.

Swiss welfare laws were already “among the strictest in the world”, said Darbellay, who pointed to existing bans on caged hens and limits on the time pigs can be kept in pens (or logettes, as the Swiss call them), to 10 days compared with several weeks in other countries.

However, only 3% of consumers in Switzerland wanted higher-welfare organic poultry and pork, Darbellay claimed. Although a ban would significantly reduce Swiss chicken, egg and pork production, it would not prevent imports nor reduce consumption, he said.

About 80% of Swiss meat is produced domestically, but Darbellay expects imports to “increase massively” if the ballot initiative is passed, while any attempt to enforce a ban would be nullified by existing trade agreements.

In 2020, the Swiss ate less meat than the average for the EU, at almost 51kg a head, while consumption of milk and dairy products was higher at 301kg. The latest available data shows average EU meat consumption in 2018 was 69.8kg per capita, while milk and dairy consumption was 600g a day in 2019, or 219kg a year.

The lower consumption is meat is largely because it is comparatively much more expensive in Switzerland than the rest of Europe. Import rules make it prohibitively expensive to import large amounts of meat, but consumers can buy small amounts of cheaper meat from neighbouring Germany.

Sign up for the Animals farmed monthly update to get a roundup of the biggest farming and food stories across the world and keep up with our investigations. You can send us your stories and thoughts at animalsfarmed@theguardian.com