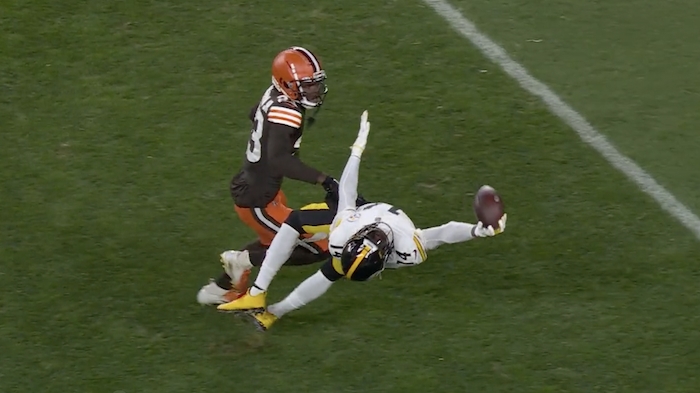 George Pickens expressed some frustration this week about the number of opportunities he’s gotten in the Pittsburgh Steelers offense up to this point in his NFL career. Pickens, a second-round selection out of Georgia in the 2022 NFL Draft, has caught one ball in each of the team’s first two games, and expressed that he thought he was open “90 percent of the time” during the team’s Week 2 loss to the New England Patriots.

Well, as it turns out, Pickens might have been on to something, as he reeled in what very well might go down as the best catch we will see in the NFL during the 2022 season. During the first quarter of Pittsburgh’s game against the Cleveland Browns, Steelers signal caller Mitch Trubisky rolled out from second-and-3 from near midfield and decided to launch one to Pickens.

While he was pretty well covered, Pickens caught the ball with one hand. That somehow undersells just how insane this reception was — seriously, look at this thing.

Here it is from a few other angles, which really highlight just how impressive this reception was.

I have no idea how on earth he caught this, but rest assured: Pickens just made one heck of an argument that he should get more balls thrown his way.