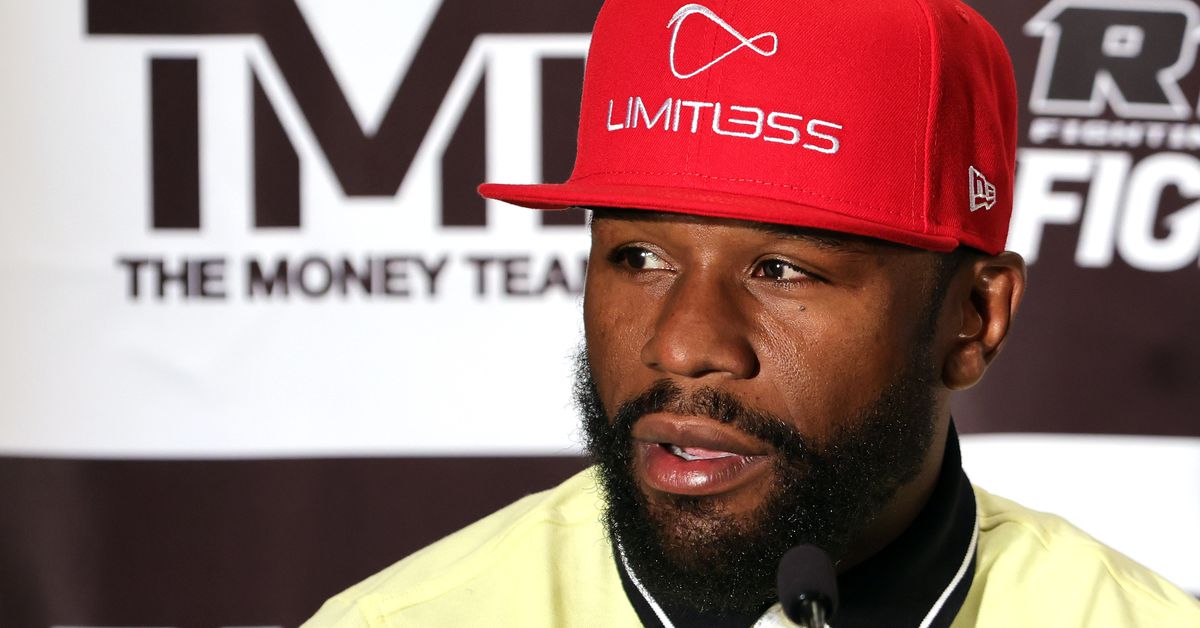 Chael Sonnen doesn’t believe Floyd Mayweather Jr. and company are being truthful with the product being put out.

Mayweather is retired from professional boxing. However, since his final win against Conor McGregor in Aug. 2017 which saw him obtain a flawless 50-0, he’s performed in three exhibition matches. The first of the bunch came as a massive surprise when Mayweather found his way into Japan-based MMA giant RIZIN Fighting Federation. In that Dec. 2018 New Year’s clash atop RIZIN 14, Mayweather knocked out undefeated superstar kickboxing prodigy Tenshin Nasukawa in two minutes and 20 seconds.

This weekend at Super RIZIN on Sept. 25, the 45-year-old legend returns for a showdown with former RIZIN title challenger Mikuru Asakura. A majority of voices questioned the legitimacy of Mayweather vs. Nasukawa, and the aforementioned Sonnen remains in that boat this time around.

“Floyd is claiming he’s gonna get $20 million for this — I call it ‘rassling because they’re not actually [fighting] — but whatever they’re getting ready to do in Japan, whatever that is that’s going to look like boxing, he’s getting $8 million,” Sonnen said on his YouTube channel. “Now, eight is a beautiful number. But he claimed he was getting 20. So I feel because I know the real number, that I can’t let it go. I must come to you guys. I have a journalistic obligation to come and inform you it’s actually $8 million and he’s exaggerating.

“He going to do something — exhibition? They’re calling it something. He’s doing ‘little guys that are terrible.’ He’s getting good exposure making a bunch of money and he’s having a really good time. All of those things bother me. I don’t want him having a good time. No fighter gets to have fun. No fighter that’s 40 years old that isn’t doing actual fights, only pretending to go against terrible competition that can barely sell … I mean these guys can barely even pretend that they’re knocked out. It’s not all that good. They don’t get to have fun and make millions of dollars.”

Mayweather’s two matches that followed Nasukawa came against vastly different opponents. First, “Money” fought the physically much larger YouTube sensation Logan Paul to an eight-round no decision. This past May, he then went to Abu Dhabi for what wound up as another no decision against his old training partner Don Moore.

Unlike Nasukawa — a kickboxer around 126 pounds — Asakura would likely provide Mayweather with a much better challenge simply for his similarity in size alone. Regardless, speaking at a press conference earlier this week, Mayweather highlighted how he doesn’t train much these days and just wants to “travel and enjoy life.”

Speaking on the Asakura matchup specifically, Mayweather described it as being “between a jet and a fly.”

“Floyd’s going to go make $8 million to not actually compete with a guy who if he did compete with he would destroy in 30 seconds,” Sonnen said. “Other people that are actually willing to fight, not call it an exhibition, not go out for eight rounds, not shorten the time limits to two a piece instead of three … can’t make a 10th of that. Why would I tease Floyd? Doesn’t it sound like Floyd’s the one that figured it out?

“If Floyd can go in there and get $8 million for whatever that is and he doesn’t have to work very hard, he doesn’t have to train at all because the script is on his side and they’ve already told him who’s going down and when, isn’t that something I’d want to emulate? Floyd’s gonna go over to Dubai, he’s gonna do something after this, which will represent the second time that he’s done that, and he’s going to get millions of dollars. I don’t know, I think in Dubai, they’re actual competition, they’re just with bums. Those might also be scripted like the stuff he’s doing in Japan, I don’t actually know that, I haven’t got to see one, they’re like little private events.”

Sonnen’s belief in fight fixing isn’t an allegation any organization wants to be bestowed upon them. For RIZIN, the closing of its 2021 campaign was followed by the same controversy stemming from the result of a bout between Atsushi “Shibatar” Saito and Yuta Kubo.

In his second RIZIN appearance, the YouTube star Shibatar pulled off another crazy victory, getting a first-round armbar that created fixed fight claims. The promotion has since gone out of its way to state the fight was legitimate and has distanced itself entirely from Shibatar and Kubo.

In the end, Mayweather’s match with Asakura won’t be the only wacky spectacle taking place at Super RIZIN. The co-main event actually has it beat in the “freakshow” factor, featuring the combat sports debut of Mayweather’s bodyguard Ray “Jizzy Mack” Sadeghi when he takes on 30-plus fight kickboxing veteran, Koji “Kouzi” Tanaka.

“This is his second time going back [to Japan],” Sonnen said. “People use Floyd once, they get their ass kicked and they don’t go back to him. It was a terrible deal. These guys are. They paid him $8 million, gave him a script, bringing him back again, giving him $8 million, have him read the script.”

Emotions. Damon Jackson explains decision to fight at UFC Vegas 60 despite brother’s passing: ‘It was really important for me’

Poirier and Chandler hash it out.

War dye for the champ ahead of the semifinals.

The claim of RIZIN fixing the Tenshin fight was always illogical. Let’s bring in a 40-year-old Mayweather to embarrass one of the biggest combat sports stars in not just the promotion, but the country, if not the biggest. Oh, then let’s do it again with yet another one of those superstars.

No matter how old he is, for one of their guys to beat Floyd Mayweather, that’s all you’d need, exhibition or not. The exposure of having him fight at all is worth the risk — no funny business is required.

Happy Friday, gang. Enjoy the UFCless weekend and as always, thanks for reading.