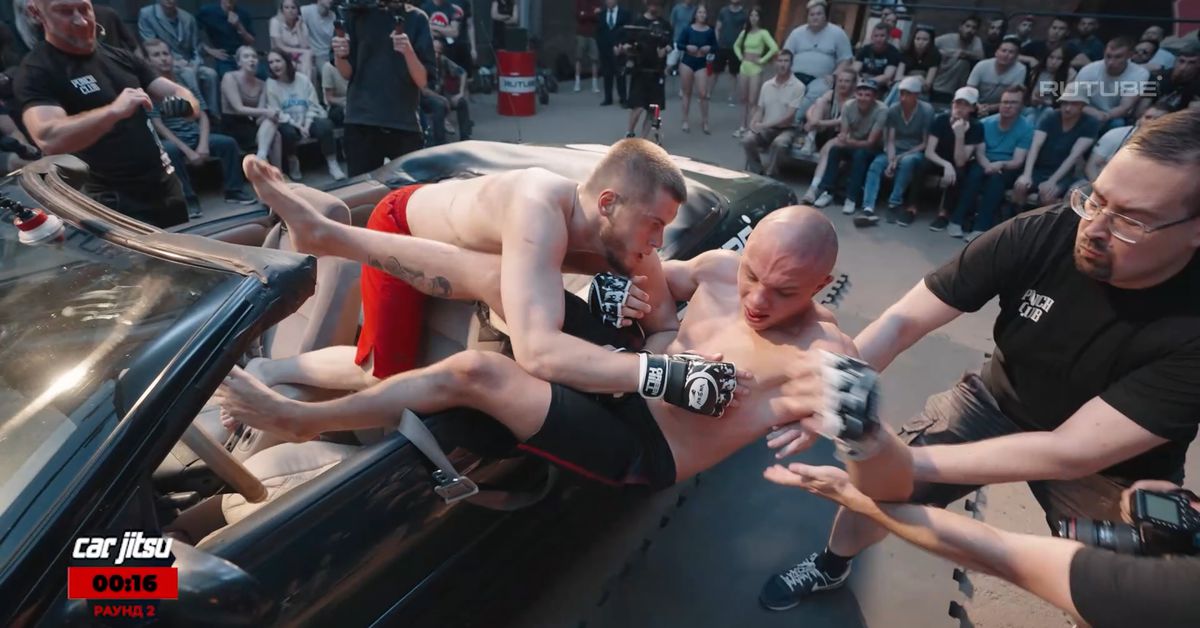 The debate over whether a ring or a cage is the ideal platform for MMA has been around forever, but Punch Club doesn’t concern itself with such binary choices. Recently, we’ve seen the promotion put on fights in a phone booth (h/t to Fight Circus, of course) as well as bare-knuckle bouts over a lake (Punch Fall!).

Punch Club only asks one question: Can you punch someone in it?

(Big thanks as always to @Barrelelapierna for their weekly lists of the best KOs and submissions, and to @Grabaka_Hitman for uploading many of the clips you see here. Give them a follow and chip in on Patreon if you can.)

Did we mention that Punch Club has also promoted Car Jitsu? Click that link if you need to know more, but I think the name alone provides plenty of information. As strange as it is, one can kind of understand wanting to simulate what it would be to grapple with someone in a vehicle (you know, should that situation arise in real life), so moving jiu-jitsu into a car doesn’t seem all that unreasonable.

But putting on MMA gear and then getting into a car to scrap? Silliness.

Beyond the obvious reasons that this is dangerous, we have the added element of one of these fighters repeatedly going for takedowns and nearly causing them to take a nasty spill to the outside.

I will say that the fighters having to unbuckle their seat belts killed me for some reason. It’s like there’s a quick draw element to it.

As far as the phone booth fighting goes, I’ve often questioned how much force one can truly generate with such little space to operate and the answer, apparently, is a lot!

For some reason, they interview both fighters after this scrap and though I don’t speak Russian, I can’t imagine that there’s much to be taken away from these conversations. It’s two guys in a phone booth. That’s not going to require a Daniel Cormier Detail breakdown.

Thanks to @Matysek88, we have official links to the full versions of these events on what I assume is Russian YouTube. You can watch more Car Jitsu here (guillotines are super effective!) and phone booth fighting a.k.a. Punch Box here.

Speaking of generating a lot of force in short distance, check out that elbow by Marciley Alves at Jungle Fight 111.

What a beautiful job by Alves lobbing out a couple of rights to coax Carlos Soares into getting in close to clinch, then surprising him with an elbow on the money. “Oh, you thought I was just fighting for underhooks?” WHAM.

Jaimison Cisterna’s knockout of Atila Junior isn’t quite as process, but it’s just as fun to watch.

Head down, hands up, can’t lose, right? I’m not sure Cisterna had any idea where that right was going to land and he just ends up bonking Junior with the side of it rather than connecting with the knuckles, but whatever it was, it was more than enough.

And Edson Lourenco’s Von Flue choke was definitely more than enough to put away Alexsandro Cangaty.

Most Von Flues catch the victim off guard, but this time I get the sense that Cangaty knew full well what was happening, he was just stuck against the fence. And that resulted in a prolonged and painful-looking submission.

A free replay of the event is available on Jungle Fight’s YouTube.

At UAE Warriors 33 in Abu Dhabi, a highly anticipated featherweight championship rematch took place between Jesse Arnett and Ali AlQaisi. This past July, their first fight ended in chaos with Arnett taking AlQaisi’s belt via a cut stoppage, a result that AlQaisi and his team did not take lying down. A post-fight kerfuffle ensued, but fortunately cooler heads prevailed and rather than anyone being suspended, it wasn’t long before UAE Warriors announced the runback.

This time, AlQaisi left no doubt who the better fighter was.

AlQaisi threw that guillotine on quick and the referee was even quicker to recognize that Arnett was out. Justice has been served, but in all likelihood these two will meet for a third time somewhere down the road.

Speaking of adventures in officiating, how about this referee scoring an impressive power double takedown at Fusion FC 53 in Buenos Aires.

I mean, yeah, Emanuel Rivero’s spinning backfist was nice, but he’s going to have to work on that wrestling defense if he wants to make it at the next level.

Mariano Pupi, on the other hand, will do just fine if he keeps landing knees like this.

They don’t come much cleaner than that. Pupi improves to 6-0 as a pro, while Maximiliano Perez is the unfortunate recipient of this week’s Humpty Dumpty Fall of the Week award.

And if you’ve got 10 seconds to spare, definitely check out Gisela Luna just trucking Sofia Montenegro.

Montenegro needed a minute to herself after that one and you can’t blame her. Just a total shock to the system.

Next let’s go to Zach Fry, who scored a picturesque flying triangle submission of Alex Gil at a UK Fighting Championships event in Preston, England this past weekend.

Shades of Rey Mysterio with how smoothly he got those legs up there and swung around back down to the mat. The work he did afterwards to cinch in the hold is great too. A+ marks all around, Mr. Fry.

Also, these guys having the exact same amount of letters in their first and last names is tripping me out for some reason. That can’t happen too often in fighting, right?

At Legacy Fighting Alliance 142 (replay available on UFC Fight Pass), Adam Vigil had one of the most fun knockouts of the week, putting Manatua Lemaire on Bambi legs with some textbook swangin’ and bangin.

Lemaire is too tough for his own good. You wish for his sake that his body had gone down and stayed there about half a dozen punches before the one that turned him into dust.

Lastly, what would Missed Fists be without a freaky finish, especially one that involves super heavyweights.

In a super-heavyweight contest, Alexandru Lungu defeats Florin Danila via first round TKO, when Danila pulls a muscle after constantly throwing spinning shit. Lungu did not land a single punch #Heroes5 pic.twitter.com/HPKNxvp8DC

Even if you didn’t know how this fight ended the clip would still be amusing, but according to @Grabaka_Hitman, Romanian veteran Alexandru Lungu won this fight without one punch having scored. His opponent, Florin Danila, literally punched himself out, utilizing one spinning technique too many and suffering some kind of injury to his leg or possibly his groin.

Lungu improved to 19-5 with that resounding victory, while Danila fell to — shocker — 0-3 as a pro.

If you know of a recent fight or event that you think may have been overlooked, or a promotion that could use some attention, please let us know on Twitter – @AlexanderKLee – using the hashtag #MissedFists.