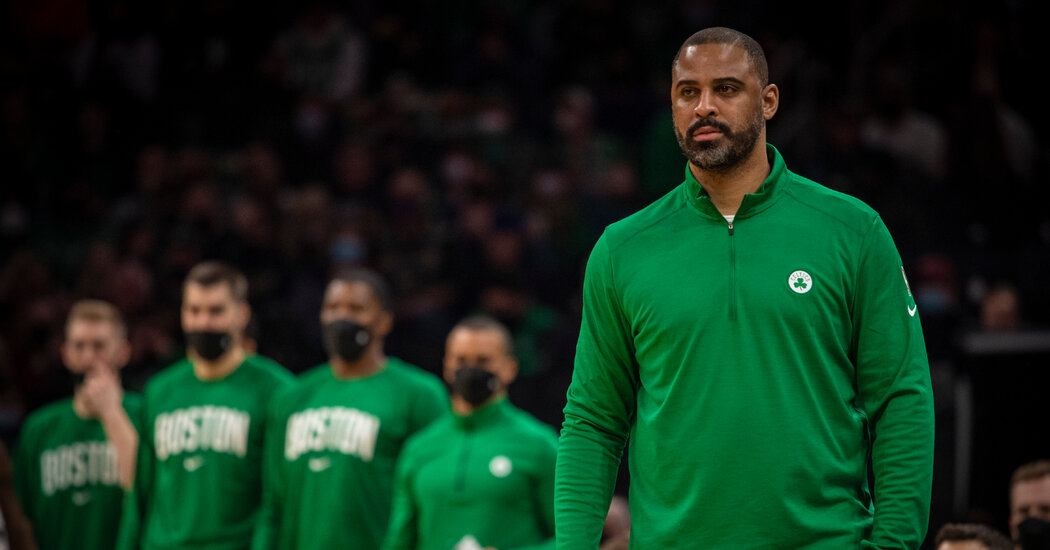 The Boston Celtics on Thursday suspended Coach Ime Udoka for the 2022-23 season for unspecified “violations of team policies,” just months after he led the team to the N.B.A. finals in his first year in the role.

A person briefed on the matter who was not authorized to speak publicly about it said Udoka had an inappropriate relationship with a female team employee that was considered a violation of the team’s organizational guidelines.

Udoka spent nine seasons as an assistant coach with the San Antonio Spurs, the Philadelphia 76ers and the Nets before the Celtics hired him to his first head coaching role in June 2021. The Celtics lost to Golden State in the N.B.A. finals this June.

Udoka’s suspension comes during a challenging month for the N.B.A.

On Tuesday, Minnesota Timberwolves guard Anthony Edwards was fined $40,000 for making homophobic remarks in a post on Instagram, where he has more than 1 million followers.

Last week, the N.B.A. said an investigation had unearthed a yearslong pattern of inappropriate behavior by Robert Sarver, the majority owner of the Phoenix Suns and the W.N.B.A.’s Phoenix Mercury. The investigation’s report said Sarver had used racial slurs and treated female employees unfairly, among other findings, over more than a decade. N.B.A. Commissioner Adam Silver fined Sarver $10 million — the maximum permitted — and suspended him for a year. But amid backlash about the perceived leniency of the punishment, Sarver announced Wednesday that he planned to sell both teams.

The Suns and the Celtics are scheduled to host media days for the 2022-23 season Monday.

Udoka, who is from Portland, Ore., had a peripatetic career as a basketball player, bouncing around overseas before he latched on with the Portland Trail Blazers for the 2006-7 season as their starting small forward. Over the next four seasons he played with San Antonio and the Sacramento Kings.

Last summer, he was part of a wave of Black coaches hired to head coaching roles, including several who, like him, had been assistants for many years. The N.B.A. has long been criticized for having mostly white head coaches in a league mostly with Black players.

In mid-January, Boston had a 21-22 record and was seemingly bound for an underwhelming season. But the Celtics won 28 of their final 35 games to close out the regular season and earn the No. 2 seed in the Eastern Conference. They swept the Nets in the first round of the playoffs, then eliminated the Milwaukee Bucks, who were the defending champions. In the Eastern Conference finals, Boston beat the Miami Heat.

The trip to the N.B.A. finals was Boston’s first appearance since 2010. Udoka came in fourth in voting for the Coach of the Year Award. Will Hardy, who was Udoka’s top assistant last season, was recently hired as the Utah Jazz’s new coach.

Tania Ganguli contributed to this report.