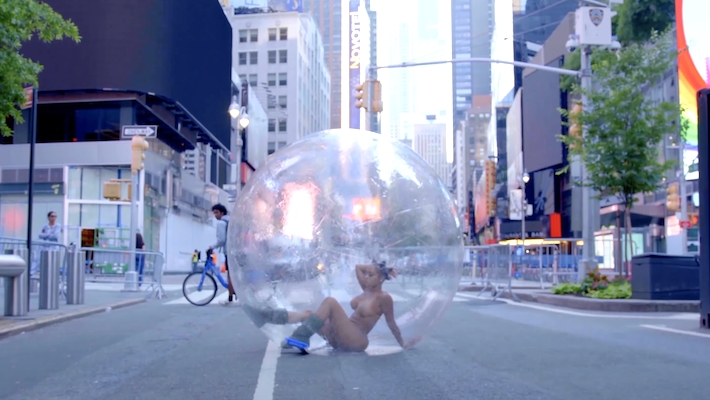 Who’d have thought DreamDoll was such an introvert? Ahead of her hometown performance at Rolling Loud New York this weekend, the Bronx rapper dropped her new mixtape Life In Plastic 3 today, making the title about as literal as it gets in the video for “Misunderstood,” the project’s intro track. In it, DD roams the lonely streets of early morning NYC practically naked inside a plastic bubble. As a visual metaphor, it’s muddled but it still works; she’s baring it all but keeping us listeners at a respectful distance, guarding her energy while exposing her struggles.

Musically, the song is very much in the same “slow build” vein as Meek Mill’s “Dreams And Nightmares Intro” or Cardi B’s “Get Up 10.” It starts off with a moody, downtempo piano-and-strings arrangement that crescendoes as the beat drops. DreamDoll’s flow picks up too, as she starts calculating the difference between the riches part of her story and the rags. She ends the song wondering whether she’s a “misfit or just misunderstood,” with an interpolation of Nina Simone’s “Don’t Let Me Be Misunderstood” closing off the beat.

The 30-year-old rapper has seen her profile start to rise over the past few years with turns in songs from the likes of CJ, Erica Banks, and Rick Ross, while her own “Ice Cream Dream” also appears on Life In Plastic 3, which is out now via District 18 Entertainment / Warner Records. Get it here.