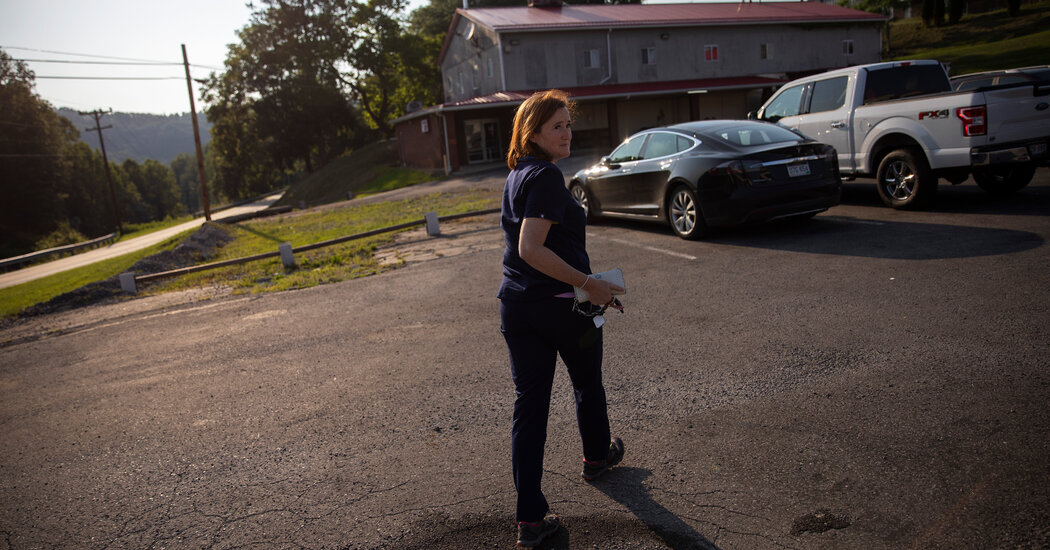 This weekend, listen to a collection of narrated articles from around The New York Times, read aloud by the reporters who wrote them.

West Virginia tops most national lists of poverty and poor health outcomes. It has the highest prevalence of obesity, coronary disease and diabetes; the fourth-highest poverty rate; the second-highest prevalence of depression; the shortest life expectancy. In Clay, there is no public transportation, no stoplight, no hospital. Most residents live in a food desert. And as one of only two family doctors in the county, Dr. Becher has an all-encompassing job.

But as the political climate around Covid-19 grew heated, and as some of Dr. Becher’s patients and neighbors began to dismiss the science, she became frustrated, then angry. She was mad about the widespread distrust of vaccines; mad about teachers who went to school even after testing positive for the virus; mad about the endemic food insecurity, the county’s lack of affordable transportation, the high rate of fatty liver disease.

The indignities layered one atop the next, forming a suffocating stack. Then, on April 17, 2021, her heart broke.

Ricardo Mendoza has spent most of the last decade living in rugged, remote mountains, herding sheep raised for wool and meat from spring to fall. “You live in complete solitude, just you, your animals and your thoughts,” he said, gazing at the windswept tundra below the soaring Uncompahgre and Wetterhorn peaks.

He is among some 2,000 herders, most of them from Peru, whom the American sheep industry depends on, brought to the United States on temporary visas designated for people who do grueling agricultural work that many Americans shun.

In the high deserts and mountains of the West, men like Mr. Mendoza dwell in tents and tiny campers for months on end, without running water, toilets or other basic conveniences. They often follow their flocks’ peregrinations on foot, like previous generations of immigrant sheepherders. But do they have a shot at the American dream?

The United States has experienced deep political turmoil several times before over the past century. The Great Depression caused Americans to doubt the country’s economic system. World War II and the Cold War presented threats from global totalitarian movements. The 1960s and ’70s were marred by assassinations, riots, a losing war and a disgraced president.

These earlier periods were each more alarming in some ways than anything that has happened in the United States recently. Yet during each of those previous times of tumult, the basic dynamics of American democracy held firm.

The current period is different.

Written and narrated by Kashmir Hill

It was the scariest night of Andrew Grantt Conlyn’s life. He sat in the passenger seat as his friend drove approximately 100 miles per hour down a palm-tree-lined avenue in Fort Myers, Fla. His friend, inebriated and distraught, occasionally swerved onto the wrong side of the road to pass cars that were complying with the 35-m.p.h. speed limit. “Someone is going to die tonight,” Mr. Conlyn thought.

And then his friend hit a curb and lost control of the car. The Mustang began spinning wildly, hitting a light pole and three palm trees before coming to a stop, the passenger’s side against a tree.

At some point, Mr. Conlyn blacked out. When he came to, his friend was gone, the car was on fire and his seatbelt buckle was jammed. Luckily, a good Samaritan intervened, prying open the driver’s door and pulling Mr. Conlyn out of the burning vehicle.

In the years that followed, the inability to track down that good Samaritan derailed Mr. Conlyn’s life. If Clearview AI, which is based in New York, hadn’t granted his lawyer special access to a facial recognition database of 20 billion faces, Mr. Conlyn might have spent up to 15 years in prison because the police believed he had been the one driving the car.

Written and narrated by A.O. Scott

The usual way of making a documentary about a famous, no-longer-living popular musician is to weave talking-head interviews (with colleagues, journalists and random celebrities with nothing better to do) around video clips of the star onstage and in the studio. The story tends to follow a standard script: early struggles followed by triumph, disaster and redemption. Movies like this clog the streaming platforms, catering to eager fans and nostalgic dads.

Brett Morgen’s new film about David Bowie is something different. Titled “Moonage Daydream” after a semi-deep cut from Bowie’s “The Rise and Fall of Ziggy Stardust and the Spiders From Mars,” it’s less a biography than a séance. Instead of plodding through the chronology of Bowie’s life and career, Morgen conjures the singer’s presence through an artful collage of concert footage and other archival material, including feature films and music videos.

Want to hear more narrated articles from publications like The New York Times? Download Audm for iPhone and Android.