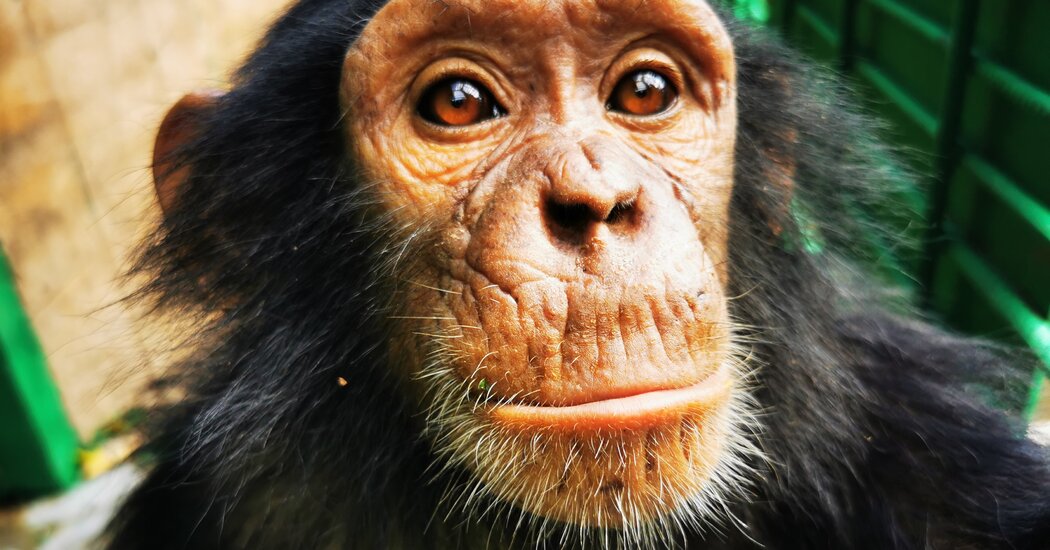 Two weeks ago, Roxane Chantereau, the co-founder of the JACK Primate Rehabilitation Center in Lubumbashi, Democratic Republic of Congo, awoke before sunrise to the buzz of incoming WhatsApp messages. Someone had sent her a disturbing video showing two baby chimpanzees scuttering across a squalid dirt floor strewn with toppled furniture. The video panned across the room to show a third chimpanzee standing on a dresser with her arms chained over her head.

Ms. Chantereau recognized the young chimpanzees in the video as Monga, César and Hussein. The animals had just been abducted from JACK, a wildlife sanctuary Ms. Chantereau, a Belgian citizen, runs with her French husband, Franck. The center provides a haven for 40 chimpanzees and 64 monkeys of 14 species, all rescued from Congo’s illegal wildlife trade.

Illegal wildlife trafficking is all too common in Congo. But the chimp-napping is the first time that a primate is known to have been stolen from a sanctuary anywhere in Africa and held for ransom. While an endangered pangolin was held for ransom earlier this year in another region of the country, it was captured from a forest rather than abducted from a high-security facility. The two incidents worry the country’s experts in wildlife crime, who fear that kidnapping of animals for ransom may become a tactic used by more criminals in Congo.

“I think this goes to show how fragile the situation is in our country,” said Adams Cassinga, the founder of Conserv Congo, a nonprofit group that fights wildlife trafficking in the Democratic Republic of Congo.

In Congo, sanctuaries are afforded the same legal protections as national parks. But for the Chantereaus, helping rescue animals from traffickers is now more difficult because JACK no longer feels secure. “Now, we bring the remaining babies to our house to sleep with us, because we are so worried,” Mr. Chantereau said.

The National Intelligence Agency — Congo’s equivalent to the F.B.I. — declined an interview request, citing the ongoing nature of the investigation.

According to Mr. Chantereau, though, the authorities are taking the case “very seriously” and “consider the robbing of these babies as a security threat for the country.”

Congo plays an invaluable role in conservation. It is home to the second-largest tropical forest in the world and has the third-highest primate diversity, after Brazil and Madagascar. It’s also the only nation in Africa where all four of the continent’s great apes — chimpanzees, bonobos, mountain gorillas and Grauer’s gorillas — live. It also has the largest population of chimpanzees of any country.

But the country has suffered from decades of injustice, social unrest, civil war and corruption, Mr. Cassinga said, and combined with high levels of poverty and a geopolitical positioning “right in the heart of Africa,” it has become a hub for wildlife trafficking. Few international conservation groups work in Congo, Mr. Cassinga added, leaving the country — the largest in sub-Saharan Africa — under-resourced and underserved when it comes to combating illegal trade.

In addition to being a hub for trafficking of ivory, rhino horn and pangolin scales, poaching of live baby chimpanzees, gorillas and bonobos is also booming in Congo — driven by a growing demand for pet primates in places like China, Pakistan, Egypt and the United Arab Emirates, Mr. Chantereau said. To capture a single baby, poachers typically shoot up to 10 adults.

“There’s collateral damage that’s much more extensive than just that one animal,” Ms. Ho said. “There’s a whole family that has been killed.”

As with other primate sanctuaries in Congo, JACK takes in animals recovered from the illegal trade, which under Congolese law are considered to be property of the state. Many apes and monkeys arrive at sanctuaries addicted to alcohol or drugs, Mr. Chantereau said, and all are traumatized. “We managed to get them out of this hell,” Mr. Chantereau said of the three kidnapped chimpanzees. “Now the nightmare is starting again.”

JACK’s overnight armed guards said they had seen and heard nothing on the evening of the abduction, and investigators also found no evidence of forced entry. Given this, the Chantereaus are “quite sure” the criminals must have a connection to at least one of their staff members, Mr. Chantereau said.

He is trying to remain optimistic that the public attention the case is garnering will encourage the abductors to return the three chimpanzees. “We hope to find them in front of the door one morning,” he said. “We’re hoping they’re still alive.”

Mr. Cassinga warned, however, that it would be important to bring the criminals to justice. “If they get away with this, these cases are going to happen over and over again,” he said. “Government, civil society and the international community need to come together and send a clear message that this will not be tolerated.”