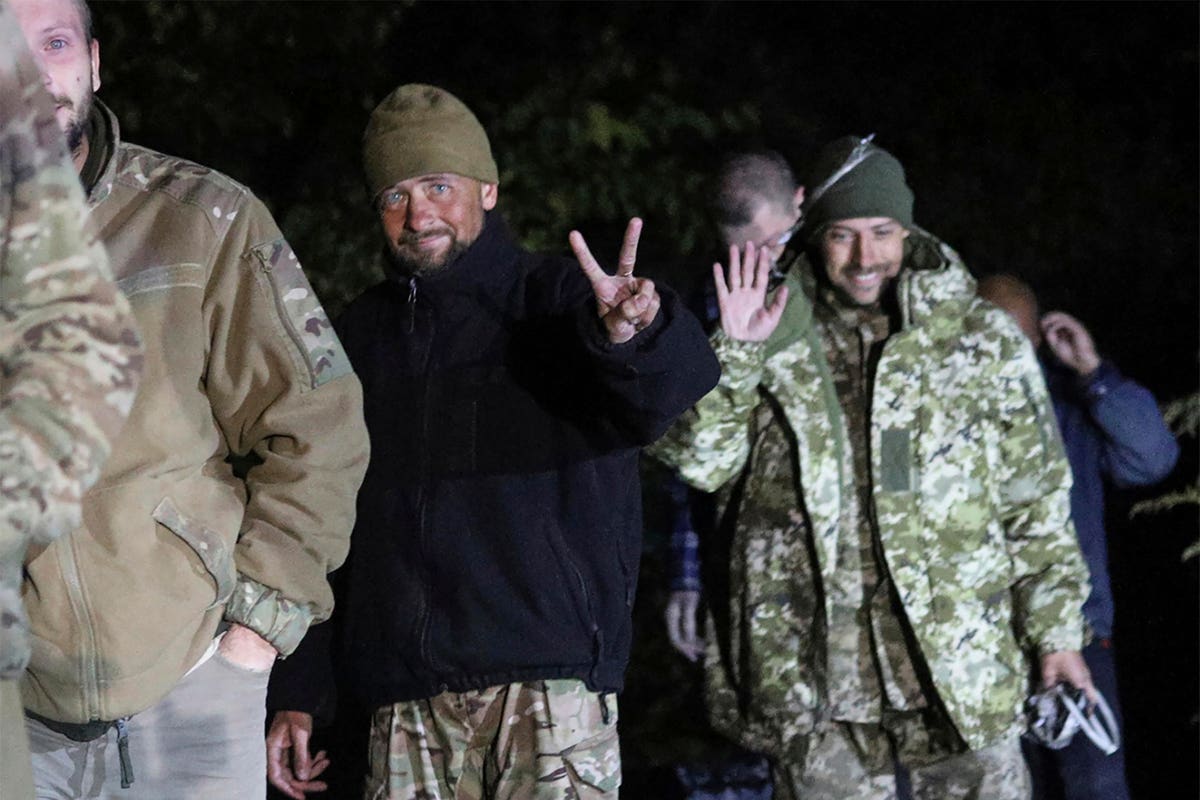 As Russia’s attack on Ukraine continues and the war rages on, reliable sources of information are critical. Forbes gathers information and provides updates on the situation.

215 Ukrainian soldiers were released from Russian captivity, including 124 officers. Ukraine managed to return 108 fighters of the “Azov” regiment and other formations of the National Guard of Ukraine. Three defenders who were captured while pregnant were also released. “We are bringing our people home,” said President of Ukraine Volodymyr Zelenskiy. “This is definitely a victory for our state, for our entire society. And most importantly, for 215 families who will be able to see their loved ones in safety.”

The prisoners of war were exchanged for pro-Russian opposition leader Viktor Medvedchuk, “Also, as a sign of gratitude for the help to our country,” Zelenskiy added, “Ukraine freed from Russian captivity five citizens of Great Britain, two citizens of the United States, citizens of Morocco, Sweden, and Croatia.”

Russian forces attacked Zaporizhzhia with 9 S-300 missiles. The rockets fired by the Russian military struck a hotel and restaurant complex located in the city’s central park, a television tower, and an electrical substation. “For some time, we had to turn off the backup generator, including in the regional hospital,” Oleksandr Starukh, Head of Zaporizhia Oblast Military Administration. “This problem is currently solved. The infrastructure will still have to be restored.”

During the attack, one 65-year-old man died, and five other residents were injured by shrapnel. More than 20 high-rise buildings and their adjacent area, as well as civil and critical infrastructure buildings were damaged.

In de-occupied Kupyansk, in the Kharkiv region, law enforcement officers discovered aerial bombs dropped by Russian troops on residential buildings. Prosecutors of the Kupyansk district prosecutor’s office of the Kharkiv region, together with police officers, discovered FAB-500 parachuted concrete-piercing aerial bombs during a city inspection. The warhead of one bomb weighs half a ton and is more than 2 meters long. FAB-500 fell on residential areas of the city, with some dropped bombs directly onto houses.

Mykolaiv. The city was subjected to massive rocket fire by 9 Russian S-300 anti-aircraft missile systems. “High-rise buildings, gas pipelines, water supply, cinema, theater courtyards, and administrative buildings were damaged, windows were broken,” wrote the head of the Mykolaiv Regional State Administration, Vitaliy Kim, on his Telegram channel. “Also, at 01:21 a.m., a fire broke out in a warehouse as a result of rocket fire. No victims beforehand.” Since the beginning of Russia’s all out invasion of Ukraine in February, 4,457 private houses and 880 high-rises in Mykolaiv have been destroyed.

The Minister of Foreign Affairs of Ukraine, Dmytro Kuleba, appears on The Late Show with Stephen Colbert. During Kuleba’s interview, he and Colbert discussed the referendums that Russia plans to hold in occupied territories of Ukraine, nuclear weapons and the Ukrainian Army’s recent successful counteroffensive in the Kharkiv region.

Commenting on the counteroffensive, Kuleba said: “It proves not only to us, but to the entire world that we know how to win and we will.” His statement was met with loud applause from the audience of the program, and Kuleba dedicated his appearance on the show to the Ukrainian people and the Armed Forces of Ukraine. “(Russian president Vladimir Putin) can arrange sham referendums, he can call it part of the moon,” said Kuleba. “This is our land. This is our people. We will retake every square meter of our territory and we will liberate people.”