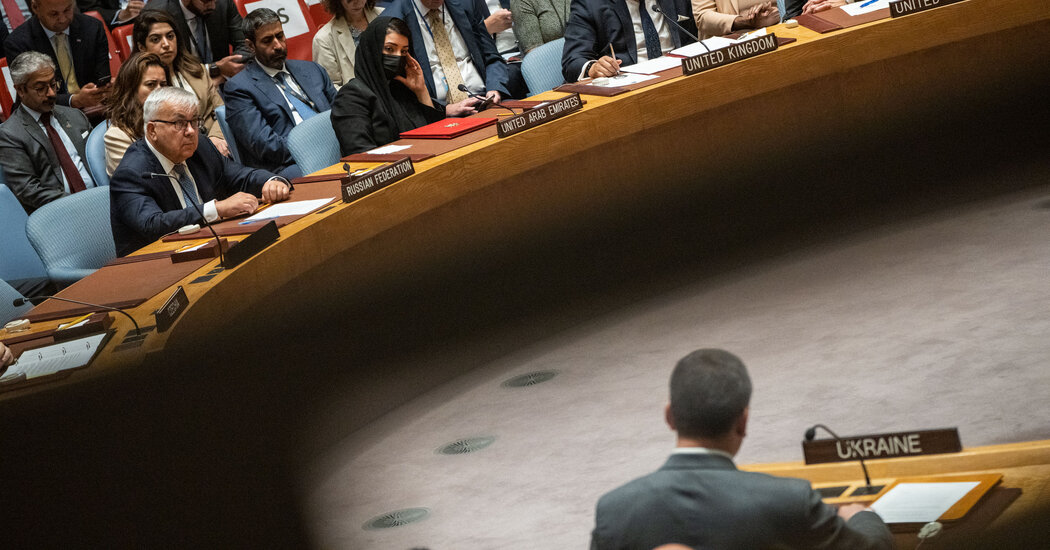 The United States and others blasted Russia at a Security Council meeting on Thursday to discuss Moscow’s war in Ukraine, excoriating the Kremlin’s decision to escalate the war by sending in more troops and its veiled threat of using nuclear weapons.

The meeting, which brought together the foreign ministers of the United States and Russia, along with European members of the Council, for the first time since Russia invaded Ukraine in February, had special significance. It was scheduled for this week to draw attention to Ukraine during the annual gathering of world leaders at the United Nations General Assembly.

Secretary of State Antony J. Blinken accused Russia’s president, Vladimir V. Putin, of showing contempt for the U.N. Charter by “adding more fuel to the fire he started” the same week that nations meet for the General Assembly, saying the international order “is being shredded before our eyes.”

“We cannot, we will not, allow President Putin to get away with it,” he said, adding, “One man chose this war. One man can end it. Because if Russia stops fighting, the war ends. If Ukraine stops fighting, Ukraine ends.”

Adopting a defiant tone, Ukraine’s foreign minister, Dmytro Kuleba, described Mr. Putin’s decision to call up reservists as an announcement of “his defeat.”

Russia’s foreign minister, Sergei Lavrov, walked into the chamber just before his speaking slot and left shortly after. He accused Ukraine of threatening Russia’s security.

Before the meeting, Josep Borrell Fontelles, vice president of the European Union, said that the discussion at the Security Council reflected the new threats presented by Mr. Putin and his escalation of the conflict.

“Putin says that he is ready to use all arms at his disposal, and when someone says, ‘all,’ he also means explicitly nuclear arms,” Mr. Borrell Fontelles said. “This is something that the international community cannot accept. The United Nations this week has to react.”

Security Council diplomats said before the meeting that there was no plan to introduce a resolution or action to impose sanctions on Russia. As one of the five permanent members of the Security Council, Russia has veto power and could block any action against itself. In February, Russia vetoed a resolution condemning its invasion of Ukraine and calling for it to withdraw its troops.

The war in Ukraine and its far-reaching consequences — driving an energy crisis, worsening food shortages and disrupting supply chains — have dominated much of the Assembly. Many leaders from Africa, Latin America and Asia — including those reluctant to denounce Russia directly — spoke about the cascading problems caused by the war and the intense pain it was bringing their people.