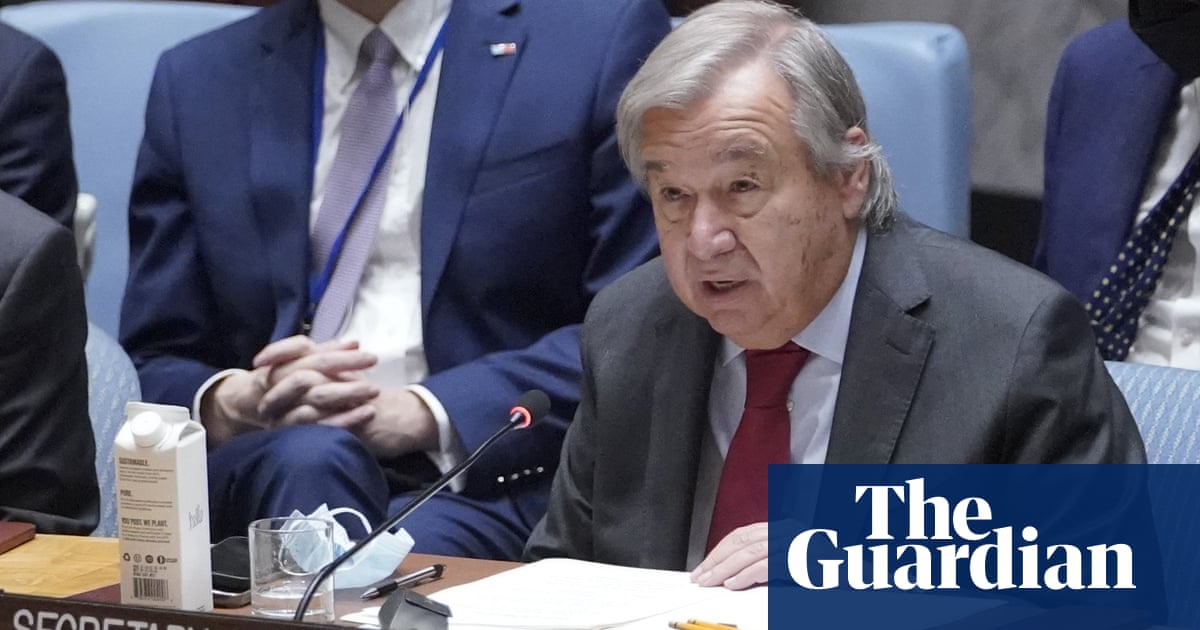 The UN secretary general has issued a strongly worded rebuke to Russia for “totally unacceptable” nuclear threats and denounced its plans to annex parts of Ukraine as a “violation of the UN charter and of international law”.

António Guterres also said the impact of the conflict could cause a food supply crisis next year. “Simply put the world will run out of food,” he said.

Guterres was speaking at the start of a UN security council meeting the day after Vladimir Putin raised the stakes in his invasion of Ukraine, announcing a partial mobilisation and threatening the use of nuclear weapons “if the territorial integrity of our country is threatened”.

He also approved referendums in four Ukrainian regions intended to the way for annexation, raising the prospect that Putin would then deem Ukrainian operations to recapture them as a threat to Russia‘s “territorial integrity”.

The US president, Joe Biden, rejected the nuclear threat as reckless, and Ukraine’s backers said they would not be deterred from providing military support.

“The idea of nuclear conflict, once unthinkable, has become a subject of debate. This in itself is totally unacceptable,” Guterres said.

“I’m also deeply concerned by reports of plans to organise so-called referenda in areas of Ukraine that are not currently under government control,” he said. “Any annexation of a state’s territory by another state resulting from a threat or use of force is a violation of the UN charter and of international law.”

China’s foreign minister, Wang Yi, repeated Beijing’s line that the UN charter and territorial integrity must be supported, without directly criticising Russia, which is an ally. Wang did not, however, offer Moscow any rhetorical support in a carefully worded address.

The council was briefed by the chief prosecutor of the international criminal court (ICC), Karim Khan, on the investigation of mass graves found in Ukrainian towns liberated from Russian occupation.

Khan said the “echoes of Nuremberg should be heard today”, invoking the precedent set by the war crimes trials of the Nazis.

Russia’s foreign minister, Sergei Lavrov, did not address Guterres’s comment, repeating Moscow’s discredited claims that Ukraine was being run by “neo-Nazis” and the war had been caused by mistreatment of Russian speakers in the Donbas.

He said Russia had no confidence in the ICC. Lavrov was not in the chamber for the ministers who spoke before him, and left as soon as he had delivered his own address.

The expansion of Russian conscription initially intended to draft 300,000 soldiers, has triggered protests around Russia and an exodus of military-age men.

Putin’s escalation of the war in the face of territorial losses to Ukrainian forces has led to a new round of sanctions being considered. EU foreign ministers agreed in Brussels to prepare a new package expected to include broad economic and individual measures.

Guterres also pointed to the success of the UN-brokered Black Sea grain initiative in exporting more than 4.3m tonnes of food, as a result of which he said food prices had dropped sharply.

But he said a drop in Russian exports of fertiliser and ammonia was creating already causing shortages in West Africa and elsewhere. “If the fertiliser market is not stabilised next year it could bring the food supply crisis,” he said.

In his speech on Wednesday Biden said that food and fertiliser were not subject to international sanctions.

“Let me be perfectly clear about something: Our sanctions explicitly allow – explicitly allow – Russia the ability to export food and fertiliser. No limitation. It’s Russia’s war that is worsening food insecurity, and only Russia can end it,” he said.

“Let us be clear, we are not sanctioning food,” he said. “It is Russia’s actions that are preventing food and fertiliser getting to developing countries. It is Russia’s tactics and bombs that are to blame for destroying Ukraine’s farms infrastructure and delaying its exports.”