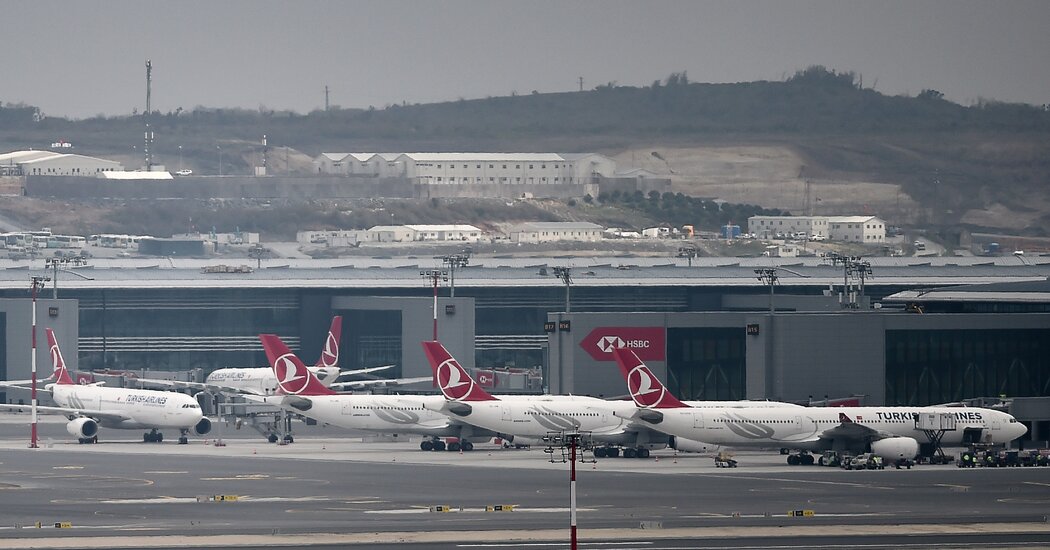 A little more than 12 hours after he heard that Russian civilians could be pressed into military service in the Ukraine war, the tour guide said he bought a plane ticket and a laptop, changed money, wrapped up his business, kissed his crying mother goodbye and boarded a plane out of his country, with no idea when he might return.

On Thursday morning, he walked into the cavernous arrival hall of the Istanbul International Airport carrying only a backpack and the address of a friend who had promised to put him up while he figured out what to do with his life.

“I was sitting and thinking about what I could die for, and I didn’t see any reason to die for the country,” said the tour guide, 23, who, like others interviewed for this article, declined to give his name for fear of reprisals.

Since President Vladimir V. Putin’s announcement on Wednesday of a new troop call-up, some Russian men who had once thought they were safe from the front lines have fled the country. And they have done so in a rush, lining up at the borders and paying rising prices to catch flights to countries that allow them to enter without visas, such as Armenia, Georgia, Montenegro and Turkey.

Though Mr. Putin officially called up only reservists, saying that only men with military experience would receive orders to report for duty, many worried that the government would impose new travel restrictions on conscription-aged men and wanted to make a quick escape just in case.

Turkey already was among the countries that received a large exodus of Russians at the beginning of the Ukraine invasion. Many were fleeing the crackdown at home, including the criminalization of dissent, with speaking out against the invasion or even calling it a war now carrying serious penalties. Others worried about the impact of international sanctions and Russia’s growing isolation on the economy and their jobs.

Now, a new wave may be beginning, and while the exact scope of it was not immediately clear, the rush for plane tickets and the long lines of cars at the borders were indications that the prospects of an expanded conscription have alarmed a swath of Russian society.

Aleksandr, an executive manager from Moscow, said he started packing even before Mr. Putin had finished his announcement on Wednesday. Minutes later, he was on his way to the airport, looking for available tickets en route.

Tickets to his preferred destinations — Istanbul and Almaty, Kazakhstan — had already sold out, so he settled on Namangan, Uzbekistan, a city he said he had never even heard of. Then he sweated his way through passport control, fearing that the Kremlin would close the border to reservists like him.

“I realized that the stakes just were very high,” said Aleksandr, 37, in a phone interview from Namangan. “I was already ready for everything, that they would just turn me away at the border.”

The plane, he said, was full of people like him — “stooped young men with laptops.” A passenger next to him had never heard of Namangan either.

Back in Moscow, Aleksandr’s wife, suddenly alone with their three children, was in shock. “My hopes that things might remain more or less OK collapsed today,” she said by phone.

Anastasia Burakova, the founder of Kovcheg, a group that helps Russians who oppose the war settle abroad, said her organization had seen a surge in requests for help after Mr. Putin’s announcement. But it is becoming harder for Russian men to quickly leave the country, she said, with flights selling out and the prices for any remaining seats skyrocketing.

Until now, most Russians looking to flee had been activists, protesters or journalists who had spoken out publicly against the war, Ms. Burakova said.

“Now we see a lot of people who did not care about it, but are leaving the country because they are scared of mobilization and they worry that it could be a reality for them and their families,” she said.

As airline tickets sold out, some Russian men were looking into driving across borders to neighboring Georgia and Finland, according to numerous channels on Telegram, a popular messaging app. Some reported long lines at the borders as border guards conducted thorough checks of men.

The conscription announcement did not immediately affect policies in the United States and in Europe that have made it difficult for Russians to enter.

In principle, European Union officials say they stand in solidarity with the men who don’t want to fight. “Russians are voting with their feet, basically, ” said Peter Stano, a spokesman for the European Commission. But in practice, offering asylum or even a faster visa process to help them get out of Russia quickly will be a challenge.

Israel, however, was looking to facilitate an expected influx of Russian Jews, officials said. Israel’s immigration minister, Pnina Tamano-Shata, told local media on Thursday that her ministry was “doing all we can to help them get to Israel in safety, despite the challenges they are facing at this time.”

One of the challenges was finding flights.

The few direct flights from Moscow to Tel Aviv were almost fully booked, with individual tickets selling for more than $5,000, according to the Israeli media reports.

Some of the Russians arriving in Istanbul dragged huge roller bags stuffed with personal belongings they hoped would make it easier to set up new lives. Others had left in a rush with small bags containing only a few changes of clothes.

Many said they would not return home as long as the threat of conscription loomed. But the suddenness of their departure meant that few had definite plans for what they would do next.

The tour guide, who is a reservist, said that he had arranged a temporary place to stay in Istanbul and that he hoped to improve his English and look for work in Turkey.

One Russian information technology worker in the Istanbul arrival hall stood out for his tan and his Hawaiian shirt. He said he had been on his honeymoon in Egypt when he heard the news about the military call-up.

A reservist, he decided to remain in Istanbul during his layover, while his wife continued on to Moscow to collect the couple’s money and important documents. With $300 in his pocket, he planned to take an overnight bus to Tbilisi, Georgia, where he hoped his wife would join him in a few weeks.

A 26-year-old merchant mariner who gave his name only as Dmitriy said he would wait in Turkey until his next ship job began in December, to ensure that he would not be drafted in the meantime.

“I decided that I needed to leave now,” he said.

Over the past 24 hours, he said, his friends had been messaging each other to explore their options and consulting Telegram channels where people share information about the conditions at Russian airports and border crossings.

The mariner said that most of his friends had stayed in Russia after the invasion of Ukraine, believing the war would not affect them much. He said most were rushing to get out.

“Lots of people want to leave Russia now because they don’t want to fight for the opinion of one person,” he said, dismissing the invasion as a personal project of Mr. Putin.

“It is not about defending your family,” he said.