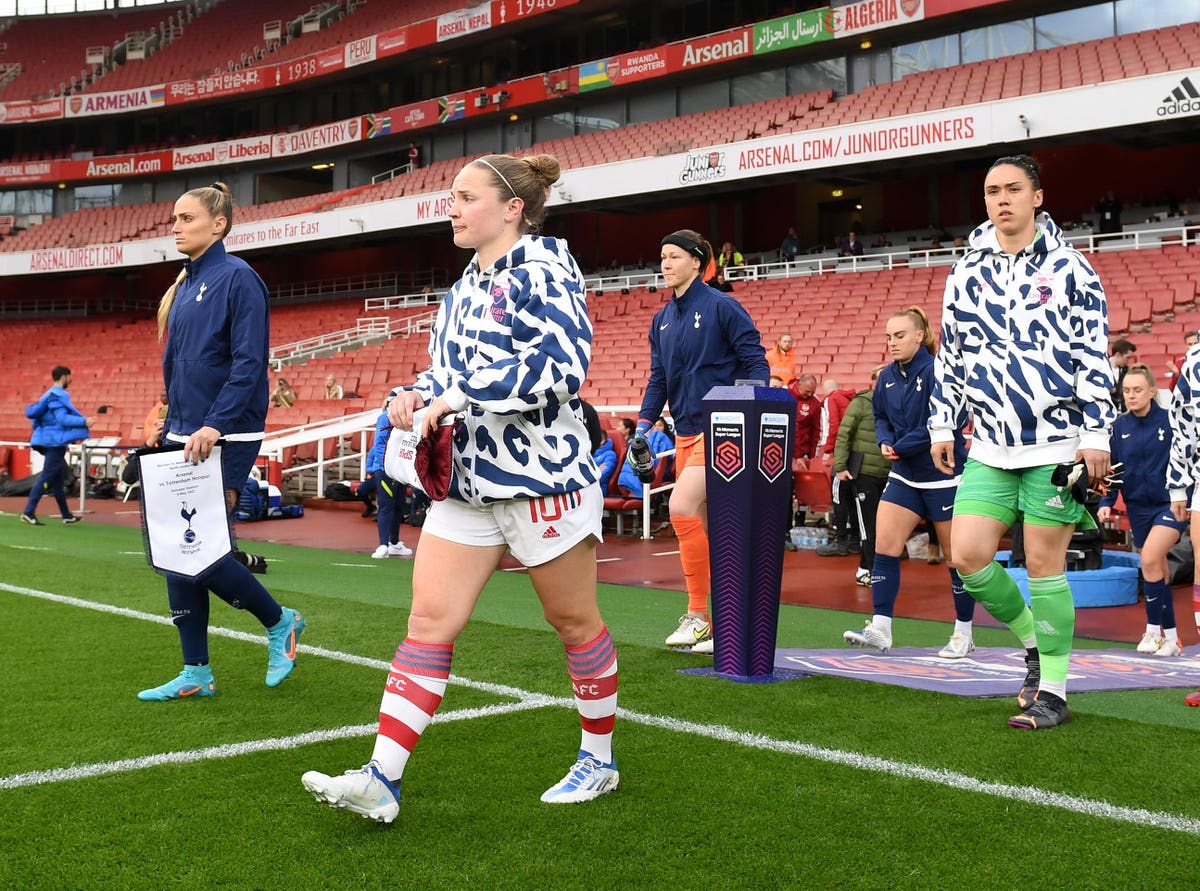 Saturday’s Barclays Women’s Super League match between North London rival Arsenal and Tottenham Hostpur has sold over 50,000 tickets putting it on course to become the biggest-selling women’s club match in history breaking a 102-year-old record set two years before the women’s game was outlawed in England.

If more than 53,000 attend the game played at the Emirates Stadium, it will break a record set in December 1920 when it is estimated that many fans filled Goodison Park in Liverpool to watch Dick, Kerr Ladies play St. Helens with a reported 14,000 further fans left outside, unable to gain entry.

The same two teams already hold the modern league record set three years ago when 38,262 fans watched Spurs lose 0-2 to Arsenal at the Tottenham Hotspur Stadium. The two sides met for the first time at the home of Arsenal, the Emirates Stadium, in May in a match rearranged following a Covid-induced postponement, on a weekday evening which resulted in a disappointing attendance of 13,438, less than a quarter of the stadium’s capacity.

Now, buoyed by England’s victorious summer at the UEFA Women’s Euro and playing in a lunchtime weekend slot free of competing men’s top-flight matches, sales have been continuous since the match was first announced in July. With sales now over 50,000, it seems conceivable the 60,704-capacity stadium, the first-largest soccer stadium in the country, may sell-out.

Saturday’s match is one of three Barclays Women’s Super League matches that Arsenal will play at the Emirates Stadium with further games against Manchester United and Chelsea to be staged in November and January. Their Chief Commercial Offier, Juliet Slot said “we are fully committed to driving the long-term growth of Arsenal Women, and hosting key matches such as the North London Derby at Emirates Stadium is an integral part of that strategy. The appetite for women’s football in this country has never been clearer and we want to ensure that as many supporters as possible can watch our brilliant team in person.”

Earlier this year, the women’s FA Cup final between Chelsea and Manchester City was watched by a new record attendance for the competition of 49,054 which is the largest crowd to watch a women’s club match in England during the 21st century.

The world record for a regular season league match is the 60,739 who watched Atlético de Madrid host FC Barcelona at the Wanda Metropolitano in Madrid in 2019. FC Barcelona broke this mark twice last season in the UEFA Women’s Champions League when over 91,000 watched their matches against Real Madrid and VfL Wolfsburg at Camp Nou.

You would have to go back over a century to find a comparable crowd figure in English women’s soccer. On Boxing Day 1920, the English works side Dick, Kerr Ladies drew a reported attendance of 53,000 to Goodison Park, one of a string of five-figure crowds who watched them up and down the country. The team were formed during the First World War when women took up work in factories, such as at the Preston-based Dick, Kerr and Co., previously undertaken by men taken away to fight on the battlefield.

Seemingly concerned by the popularity of Dick, Kerr Ladies, who were regularly generating gate receipts comparable with the top English men’s teams of the time, England’s Football Association (FA) imposed an outright ban on women’s teams from playing on any ground affiliated to a professional men’s club the following December, a de facto ban on the developing women’s game. The prohibition stood for 50 years until it was finally rescinded in 1971.

It has taken the women’s club game 102 years to reach such heights again.