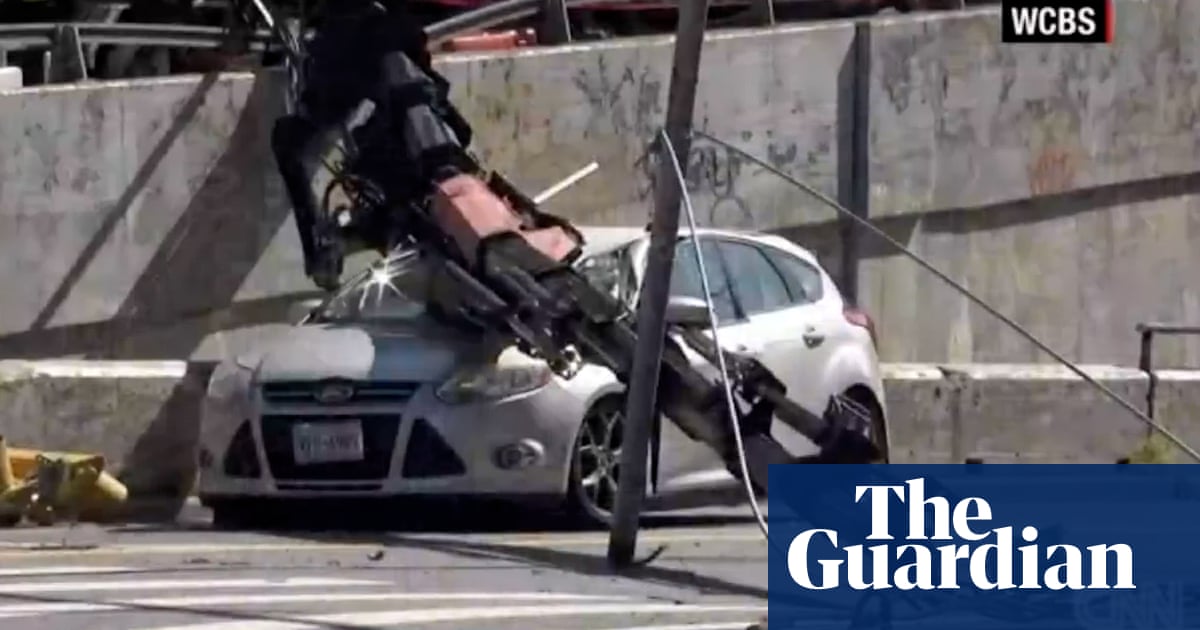 A New York woman had a miraculous escape when a crane collapsed and crushed her car as she waited at an intersection.

Danielle Cruz, 22, only suffered minor injuries when the crane, attached to a boom truck, smashed into her car on Tuesday in the Bronx.

Cruz, a student at a local college, was driving to class at the time. She said she first saw the crane take down a light pole and anticipated that it might hit her vehicle.

“It happened slow and fast at the same time, like I kind of felt like something was going to happen after I saw the pole move,” Cruz told ABC7 News.

“The thing came down on my car, and it caved in the whole windshield, the whole top of my car … and the first thing it did was hit my head.”

Cruz told first responders that if she had stopped her car 3in forward, she would have been dead.

Cruz was initially stuck inside her crushed car, NBC News New York reported, but was able to get out thanks to strangers who rushed to help.

“I tried to get out of the car and the door wasn’t opening so this guy he ran to the car and he like opened the door and grabbed me,” said told News 4, a local station.

She was taken to taken to hospital, then released.

Williams added: “I was standing there, and all the sudden, I was looking up, and I saw the beam pop, and it was coming down, it was like a movie.”

Williams feared the crash would prove fatal, saying: “Thank God the lady was all right. We snatched the door open and got her out.”

Cruz told NBC she was grateful to those who rushed to her assistance and said the accident reminded her that she was here for a purpose.

She added, with a laugh: “Honestly I’m glad that I’m short … Because if I was three inches taller, that would have been it.”

The crane reportedly broke from the truck while lifting materials at a construction site for an 11-story apartment building. It was not clear what caused the crane to snap.

Twenty-nine construction workers were evacuated from the site by the local fire department, the New York Daily News reported.

A partial stop work order was issued for the site after an inspection uncovered several safety violations, ABC7 reported.