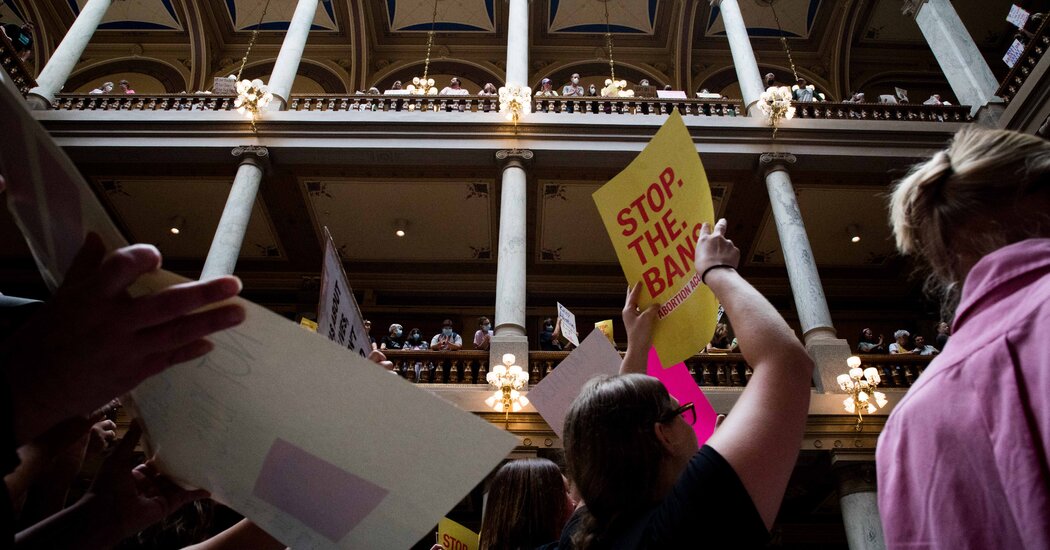 It also adds to the shifting and often chaotic patchwork of abortion regulations across the country as conservative legislatures push for tighter restrictions and abortion rights groups challenge them in court. The legal challenges are seeking to establish a right to abortion in individual state constitutions. Such cases, though in preliminary stages, are being watched closely to see whether that strategy works.

The Indiana law, signed by Gov. Eric Holcomb, a Republican, in early August, bans abortion from conception except in some cases of rape, incest, fatal fetal abnormality or when the pregnant woman faces risk of death or certain severe health risks.

The decision of Special Judge Kelsey Hanlon, a Republican, of the Owen County Circuit Court, means that abortions up to 20 weeks after fertilization, or 22 weeks after a woman’s last menstrual cycle, can resume in the state.

In her ruling on Thursday, Judge Hanlon wrote that the Indiana Constitution includes a right to liberty and bodily autonomy, which reasonably includes decisions about family planning and “whether to carry a pregnancy to term.”

The narrow exceptions included in the abortion ban mean that the state allows a woman to have the procedure only after “first experiencing extreme sexual violence or significant loss of physical health or death,” Judge Hanlon wrote. And the ban — which strips abortion clinics of their licenses — “materially burdens the bodily autonomy of Indiana’s women and girls by significantly and arbitrarily limiting their access to care.”

Leaders from a coalition of abortion providers who brought the case said Thursday they “are grateful that the court granted much-needed relief for patients, clients and providers, but this fight is far from over.”

Indiana’s attorney general, Todd Rokita, a Republican, said his office planned to appeal the ruling and remained “determined to fight for the lives of the unborn.”

The state’s abortion ban requires that the procedure be performed only in hospitals or ambulatory outpatient surgical centers. A doctor who performs an illegal abortion in Indiana could be charged with a felony and face one to six years in prison and a fine of up to $10,000.

Challenging the ban in late August in the Monroe County Circuit Court, a coalition represented by the American Civil Liberties Union of Indiana filed the lawsuit against members of the Medical Licensing Board of Indiana and other county officials. The coalition, which includes Planned Parenthood, argues that the state’s abortion ban infringes on residents’ right to privacy and violates the state’s guarantee of equal privileges and immunities.

In a hearing Monday before Judge Hanlon, the attorney Kenneth J. Falk, the legal director of the ACLU of Indiana, argued that the state legislature had overstepped its authority in enacting the ban.

Tom Fisher, the state’s solicitor general, said during the hearing the right to abortion in Indiana is “historically unsupported” in the state, noting that abortion was prohibited when the present-day Indiana Constitution was written in 1851.

“That history forecloses any legitimate claim to a right to have an abortion under the Indiana Constitution,” he said.

Mr. Fisher said the argument that the state Constitution’s right to liberty leads to a right to abortion involved “too many leaps.”

Judge Hanlon wrote that the state Constitution had a history of providing greater protection to individual citizens than the United States Constitution, and could still be interpreted “as protecting bodily autonomy, including a qualified right by women not to carry a pregnancy to term.”

Indiana assumed an outsize role in the nation’s abortion debate this summer when a 10-year-old rape victim from Ohio was forced to travel to Indiana to seek an abortion because of her state’s ban.

The Planned Parenthood lawsuit is one of two that have been brought recently against the Indiana ban. The other, a class-action lawsuit filed this month by the ACLU of Indiana on behalf of Hoosier Jews for Choice and five individual plaintiffs, argues that the ban violates Indiana’s Religious Freedom Restoration Act, which prohibits government action that substantially burdens a person’s exercise of religion.