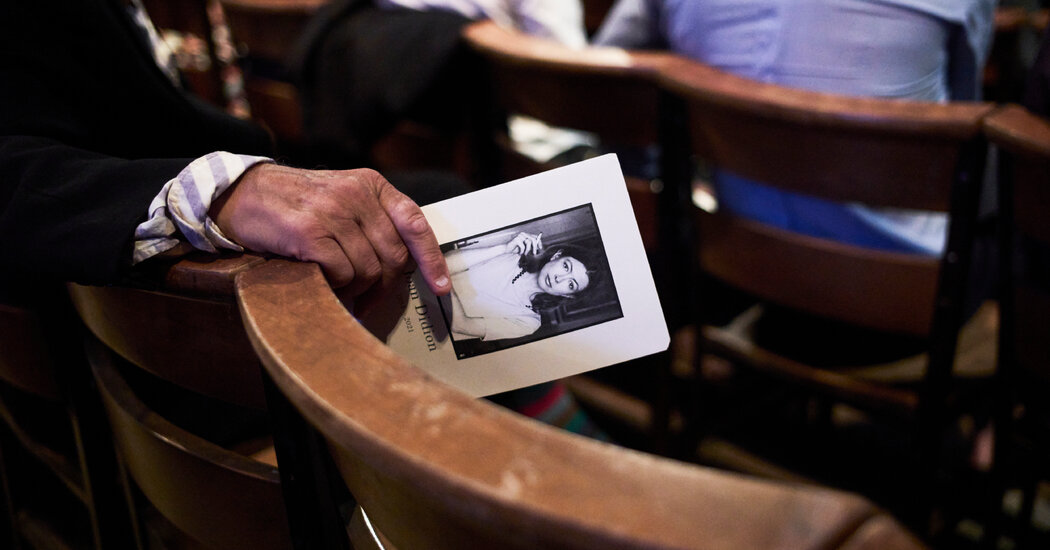 “I know why we try to keep the dead alive,” the actress Vanessa Redgrave said on Wednesday evening, speaking from a lectern at the Cathedral Church of St. John the Divine on the Upper West Side of Manhattan, where she was accompanied by her son-in-law, the movie star Liam Neeson. “We try to keep them alive in order to keep them with us.”

The words Ms. Redgrave was speaking were not her own. They belong to Joan Didion, the tiny in size but towering in stature writer who, even before her death last December at 87, had become as much an idea as a person — not just a literary icon but a beacon of intellectual chic, who in 2015 appeared in a Celine campaign.

The church was filled for a memorial service in her honor, put on by her publishing house, Knopf, and organized by her editor there, Shelley Wanger.

Among those in attendance were the writers Fran Lebowitz and Donna Tartt, the photographers Annie Leibovitz and Brigitte Lacombe, the actors Bob Balaban and Anjelica Huston, the director Greta Gerwig, and many of her civilian fans, who lined up outside. It was the kind of crowd Ms. Didion most likely would have appreciated. She was an acute chronicler of power; to be inside was its own form of status.

But the overarching theme of her work was decline — of our politics, the environment, truth, intellectualism. The eulogies reflected that preoccupation.

The first speech came from the Rev. Patrick Malloy, who described Ms. Didion’s detailed instructions for how to handle the small funeral that took place shortly after her death.

The directives involved keeping things “very brief” and reading passages from the Book of Common Prayer that were among the most “dour.”

“She didn’t believe in a personal God,” he said. “But she did believe in a God that was like geology. You know it exists, and you know it has an impact on your life, but essentially, it doesn’t know you or really care much about you. And that’s not a really surprising thing for someone who had endured the things in life she had endured.”

This included the 2003 death of Ms. Didion’s husband, the writer John Gregory Dunne, from a sudden heart attack, followed less than two years later by the death of their daughter, Quintana Roo Dunne, at the age of 39. Soon after that, Ms. Didion received a diagnosis of Parkinson’s disease. (Ms. Redgrave appeared in the stage version of “The Year of Magical Thinking,” Ms. Didion’s best-selling book about the aftermath of loss.)

Inside the humid church, organizers clad in black handed out fans printed with an Edna St. Vincent Millay quote to guests. (The memorial was delayed, at least in part, because the Cathedral had not open for large gatherings at the time of Ms. Didion’s death.) At the front of the cathedral, a screen flashed images of Ms. Didion throughout her life: with her husband, with Barack and Michelle Obama when she received the 2012 National Humanities Medal, with Ms. Redgrave at a rehearsal for “The Year of Magical Thinking.”

Was one of the photographs taken by Ms. Leibovitz, a reporter asked her. “Several,” she said.

Many of the speakers who followed Mr. Malloy were writers — among them Hilton Als, Calvin Trillin, Jia Tolentino, David Remnick and Susanna Moore — but there was also a smattering of personal friends (Susan Traylor, who grew up in Malibu with Ms. Didion’s daughter), relatives (her nephew Griffin Dunne, who directed a 2018 documentary about Ms. Didion, for Netflix), a former governor (Jerry Brown speaking on video) and even one former Supreme Court justice (Anthony Kennedy, who grew up with Ms. Didion in Sacramento).

As Mr. Kennedy told it, his older sister had been Ms. Didion’s closest childhood friend.

“She came to our house all the time after school and stayed for dinner and often overnight,” he said.

Invariably, Ms. Didion brought notebooks. She wanted to record her notes about the conversation at the house, so that she could improve her sense of dialogue, he said, adding that she was already writing for the high school newspaper.

Mr. Brown, speaking by video, also had a personal connection to Ms. Didion. His sister had been her sorority mate at Berkeley, where Ms. Didion was known for making grand entrances in the mornings, descending the stairs of the sorority house “wearing a pink chenille robe,” cigarette in hand.

Mr. Als credited Ms. Didion with teaching him “that family was always part of the story, along with place, and how the writer’s job was to face the terror, beauty, banality, and truth of both.”

He then quoted her 1966 essay “Notes From a Native Daughter.”

“What happened in New York and Washington and abroad seemed to impinge not at all on the Sacramento mind,” he read. “I remember being taken to call upon a very old woman, a rancher’s widow, who was reminiscing (the favored conversational mode in Sacramento) about the son of some contemporary of hers. ‘The Johnston boy never did amount to much,’ she said. My mother protested: Alva Johnston, she said, had won the Pulitzer Prize when he was working for The New York Times. Our hostess looked at us impassively. ‘He never amounted to anything in Sacramento.’”

Ms. Tolentino, a millennial essayist and New Yorker staff writer, said that she had not read Ms. Didion until her 20s, but immediately realized that “through the words of others, I had been reading her my entire life.”

At a memorial where so many of the eulogies came from writers who have been paid a lot to complete sentences, it came as little surprise that the guests spent much time debating about who’d given the best one.

But the funniest, many people said, belonged to Ms. Moore, who vividly recalled some of Ms. Didion’s one-liners, among them, “Whatever you do, you’ll regret both,” and “evil is the absence of seriousness.”

That one arrived following a dinner Ms. Didion hosted. Among the guests, Ms. Moore said, was Bianca Jagger, who ignited scorn from Ms. Didion by proceeding to pick the magazines up off the coffee table and read them one after the other.

Later, other guests recalled to a reporter advice Ms. Didion had given them.

The editor Joan Juliet Buck described a conversation she had with Ms. Didion, who had told her how to deal with a stalker: “Move into the Carlyle.” Annabelle Dunne, Ms. Didion’s niece, reported that her aunt had advised: “Don’t forget to have a baby. It’s easy to forget.”

Mr. Remnick started his speech with his misgivings about giving it: “How do you speak about someone who was in her time the foremost enemy of canned cliché and falsehood?” he asked, before going on to praise her “authority of tone” and the way she led by example.

“When Joan died just before Christmas, it was hard to receive the news as a shock,” he said. “And yet so many readers and so many writers absorbed the news of Joan’s death as a kind of devastation. The reason is clear. Is there an essayist today who is more admired by young readers and writers?”

The only other he could think of was “maybe James Baldwin.”

“‘There is much in Didion one might disagree with personally, politically, aesthetically,’” he said, reading from a Zadie Smith essay about Ms. Didion that had been published in The New Yorker. “‘I will never love the Doors,’” it continued, referring to her book “The White Album,” in which Ms. Didion explains her admiration for the way their music insisted that “love was sex and sex was death and therein lay salvation.” (It wasn’t the Doors that played inside the cathedral, but rather Patti Smith, who sang Bob Dylan’s ballad “Chimes of Freedom.”)

“The X-acto knife of her prose” is something many try to imitate, Mr. Remnick said. “I wish them all good luck. She is inimitable.”