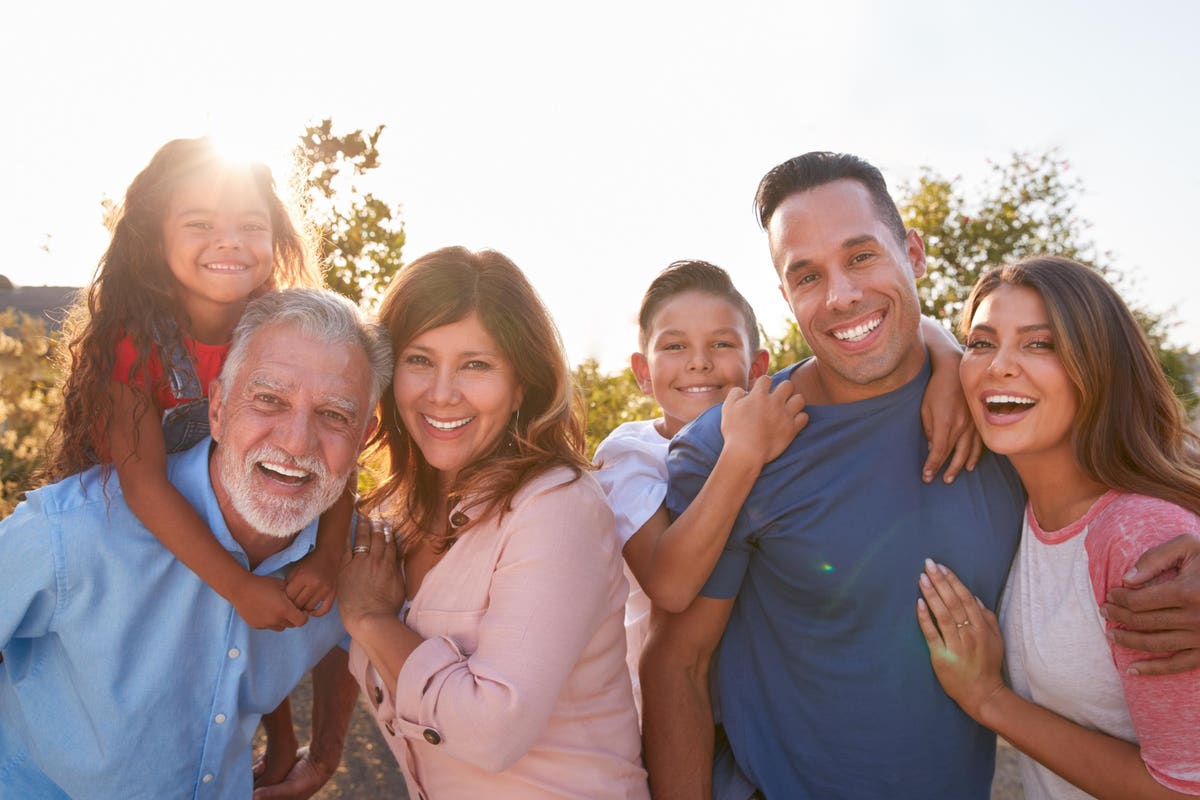 The complexion of the nation’s top-income households – the traditional target for luxury brands – is changing. While White/non-Hispanic households still dominate the top-income quintile demographic, their share declined from 75% in 2018 to 73% in 2021.

And among the other ethnicities that reached this pinnacle with incomes of ~$150k+, the Hispanic and Latino demographic grew the fastest, up 13% to reach 2.4 million households. Now their numbers are on par with Asian-alone households and ahead of Black-alone at 1.8 million.

Taken together, the affluent top earners and the high-earners-not-rich-yet (HENRYs) punch well above their weight in the consumer market. They make up only 40% of U.S. households but account for 62% of all consumer spending, 39% and 23% respectively.

The rapidly rising affluence of Hispanics, their greater representation compared to other ethnicities in the top two quintiles, and the fact they are the fastest growing ethnicity bar none means they are an increasingly important demographic for brands to understand.

In some ways, as Hispanic affluence grows, they will become more like the White majority, but in other ways, they will bring their distinct cultural values into the mix.

To the rescue come two timely studies, one from Claritas that looks across the entire Hispanic demographic and another from Merrill that examines just the affluent at the top of the food chain.

These reports have important implications for every consumer-facing business because as Hispanics’ spending power grows, brands and retailers will increasingly feel their influence at all levels of the consumer market.

Lay of the land

Overall, Hispanics make up about 20% of the U.S. population today and will reach 22% by 2028, growing three-times faster or more than any other ethnicity. Claritas calls it a “multicultural boom,” and the Hispanic culture is its primary explosive force.

Currently, the Hispanic population is concentrated in five cities: Los Angeles, New York City, Houston, Miami and Dallas. But they have been moving with population growth strongest in Washington, DC, Orlando, Tampa, Philadelphia and Atlanta from 2010 to projected 2023.

And they continue to pick up sticks and move to new places without historic links to their culture, such as North Dakota, Alabama, Georgia, Michigan, South Dakota and Vermont. Like others who aspire to affluence, Hispanics are going where job opportunities are greatest.

The wide representation of people from different cultures complicates understanding the Hispanic market. While the largest share traces their heritage to Mexico and Puerto Rico, they can have links to many Central and South American countries as well as the Caribbean and Spain.

Hispanic-Americans are a heterogenous group, differentiated not just by their cultural roots but also their language preferences. Claritas calls this their “Hispanicity” and divides them into different segments based on language usage and how long they lived here.

Not unexpectedly, second and third-generation Hispanics may have some Spanish, but they tend to prefer English. Nearly half of all Hispanics fall into this acculturated group. The others are bi-lingual (26%) or prefer Spanish (15%) or are Spanish dominant (13%), the later being recent immigrants who identify more with their home country than the U.S.

Claritas crosses country of origin and Hispanicity and finds that Puerto Ricans, for example, are more acculturated and maintain fewer Hispanic cultural practices. At the same time, Cuban Americans as a whole are less acculturated, preferring to speak Spanish and maintaining many of their cultural connections.

These cross-cultural currents – American first, Hispanic second or vice versa – add complexity to targeting this market, tailoring stores to their needs and determining the long-term potential of these different market segments across product categories.

As a group, Hispanics are younger on average than any other ethnicity or race. That being so, Hispanics’ representation is greatest among the younger generational cohorts. They make up about one-fourth of the Millennial and GenZ segments. By contrast, they represent only 14% of GenXers and less than 10% of the Boomers.

Since income tends to rise with age, we can expect to see continued rapid growth of Hispanics into the top-income quintile through 2028 and beyond

Not only can we expect their incomes and spending power to grow over time, but their relatively younger age also means they have a longer lifetime value for brands that cultivate their loyalty.

Claritas projects the life span of a Hispanic household to 2068 as compared with Asian to 2064, Black to 2057 and White/non-Hispanic to 2054. And because Hispanics tend to live in larger households than non-Hispanics, specifically multi-generational and with more children in the home, it will increase their lifetime value in categories such as food at home, food away from home in quick-service restaurants, and apparel.

In addition, the Hispanic home ownership trails that of White/non-Hispanic households, 48% compared to 74%. But as their affluence grows, Hispanics will invest in buying a home, translating into increased spending on everything it takes to furnish a home. Thus their extended lifetime value will also favor home brands and retailers.

Zeroing in on the affluent top earners in the Hispanic market, the Merrill study combines qualitative insights with a survey among some 500 affluent Hispanics/Latinos. It distinguishes the two, with Latinos referring to those of Latin-American descent and Hispanics as those of Spanish-speaking descent.

The Hispanic/Latino survey sample was virtually identical to affluents overall. That is, it skewed slightly older (76% aged 35 and older), more male (54% to 46% female), mostly married (69%) and employed (77%). They also are highly educated with a college degree or some college (58%), including 32% who hold a post-Bachelor degree. In addition, 38% have a child under 18 living in the household.

As a group, the affluent Hispanics/Latinos predominately identify as American (76%), with others feeling stronger ties to their country of origin or being part of the Hispanic/Latino community.

“What ties us is our shared values around family, food, music and things that are more universal,” said a financial professional in an interview.

The concept of universality, as opposed to one’s country of origin, can help brands overcome the incredible diversity among those of Hispanic or Latino heritage. That diversity tends to incline marketers and brands to segment them further when what is needed is a more inclusive perspective.

“Despite many being born outside of the United States or coming from humble beginnings, Hispanic/Latino individuals firmly believe in the American Dream.” That’s what brought every inbound group to this country, from the earliest settlers in Jamestown, VA and Plymouth, MA, to the present day.

“Hispanic/Latinos are more likely than the general population to believe in the American Dream – specifically, they believe that hard work will pay off and that each successive generation will be better off than the last,” the report continued.

For the affluent Hispanic/Latinos, family is the most important value in their lives, including providing for their children and making their elders proud. Religion and culture are also more important to them than the general population.

The connective thread between the generations is retaining the Spanish language. Some 73% of under 35-year-old affluent Hispanics/Latinos said they speak both English and Spanish at home.

“It’s the American Dream. Get a degree, buy a home, own a business. Education is a priority, and not forgetting to speak Spanish,” a young female marketing executive said.

It is worth noting that the Claritas and Merrill study come to different conclusions on the question of language preferences. Juan, a financial professional interviewed by Merrill provides insight about how he feels when greeted by a clerk saying “Hola.”

“I have very mixed feelings when this happens,” he said. “On the one hand, I appreciate the cultural awareness and wanting to be inclusive. On the other hand, I think, ‘Why don’t they just say hello? Do they think I don’t speak English?” I’m American, but sometimes those moments make me feel like others don’t see me that way or that I don’t belong.”

Across the board, the Merrill report highlights the sacrifices Hispanics/Latinos’ parents and grandparents made that enabled those surveyed to reach their level of affluence. And they feel a concomitant responsibility to do the same for their children and provide for their elders as the need arises.

As a result, financial stability is the goal of acquiring wealth, not buying indulgences or winning by dying with the most toys.

“One of the things my parents always focused on was working hard and saving as much as we could,” said a middle-aged woman. And another, “My biggest life goal is to provide a stable and comfortable lifestyle for my family and me. It’s my everyday life and goal. It’s what I learned growing up,”

Not afraid of hard work; rather, they feel responsible to work harder than others. This colors their view of entrepreneurship, a proven path to growing wealth.

Citing a study of entrepreneurship from Stanford, the report states the total number of Hispanic/Latino business owners grew 34% from 2009 to 2019, and these businesses had an average of 14% revenue growth, above the U.S. economy as a whole.

“My father was one of the hardest working people I know,” said a 36-year-old entrepreneur. “He started from nothing and by the time he retired, he ended up owning seven gas stations. I worked with him after high school and ended up running three gas stations by the time I was 20. With him, we bought the properties next to the stations and built bodegas to grow the business.”

Entrepreneurship is also seen as a way for Hispanics/Latinos to overcome inequality and discrimination. Some 46% felt they had to work harder than others to succeed and more than one-fourth believed their advancement opportunities were limited by their ethnicity. And entrepreneurship is also viewed as a way to provide more opportunities for other members of their community.

We rather than me

While the Merrill study didn’t delve into Hispanic/Latino purchasing behavior, the context around their values of family, hard work, responsibility, stability and community suggests a “We-Centered” rather than a “Me-Centered” approach.

This may make them a tough sell for luxury brands that use conspicuous, self-aggrandizing marketing and positioning. More subtle messages around long-lasting value and exceptional quality that justify trading up to luxury would appeal more to this consumer.

The Hispanic/Latino consumers understand the value of money and how hard they had to work to get it. They aren’t going to throw it away for here-today, gone-tomorrow indulgences. They want to leave a legacy behind.

“It’s important to me that they [my children] learn about how to manage money and work hard, so I know that our family’s ability to be self-sufficient and successful will continue into the future generations,” said an affluent male healthcare consumer.