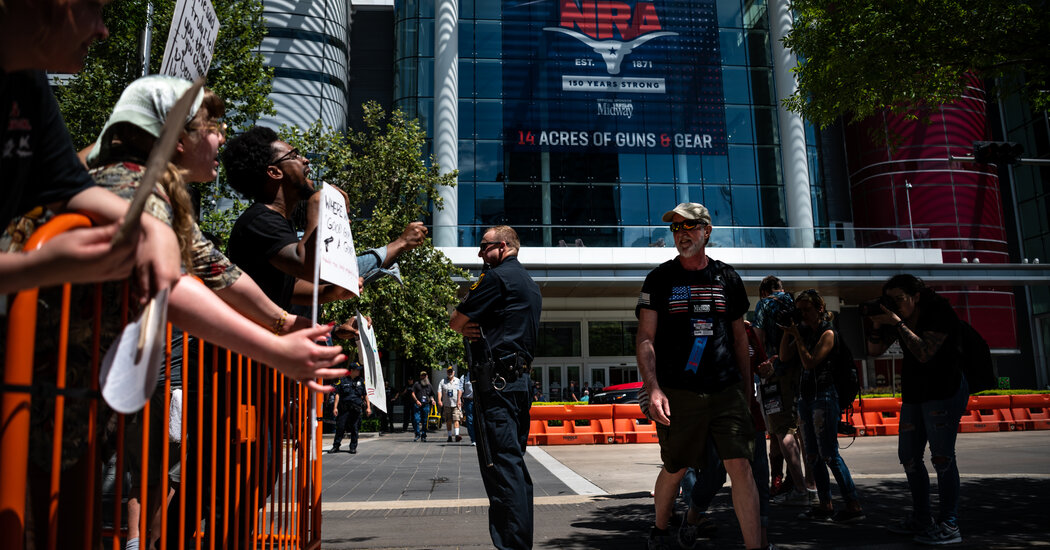 The Democratic break from the National Rifle Association is complete: For the first time in at least 25 years, not a single Democrat running for Congress anywhere in the country received an A in the group’s candidate ratings, which were once a powerful influence in U.S. elections.

A New York Times analysis of the N.R.A.’s letter grades for more than 900 general election candidates, the last of which were published this week, identified the milestone. It is the culmination of a yearslong trend of eroding support for the hard-line views of the organization, which retains strong allegiance from Republican candidates but has lost any semblance of bipartisan support.

Of the more than 450 Democrats who will be on House or Senate ballots in November, only one, Representative Jared Golden of Maine, received even a B. Three received C’s, 23 received D’s and 370 — 81 percent of the total — received F’s. (The rest received a “?” rating, meaning they had no public record on gun policy or had made contradictory statements.)

The numbers were even starker among the roughly 200 Democrats running for re-election, 98 percent of whom received F’s.

There were more defections from the party line among Republicans, though they were still in the single digits: One, Representative Brian Fitzpatrick of Pennsylvania, received an F, and seven, including four incumbents, received D’s. Notably, 24 percent of Republican candidates received a “?” rating, a mark the N.R.A. says “often indicates indifference, if not outright hostility,” to gun rights.

The State of the 2022 Midterm Elections

With the primaries over, both parties are shifting their focus to the general election on Nov. 8.

That amount has increased sharply among Republicans; it was 11 percent a decade ago. By contrast, “?” grades among Democrats declined over the same period to 13 percent from 33 percent. Many Democrats used to avoid going on the record about guns out of fear of the N.R.A.’s well-funded backlash.

All told, of 926 major-party candidates on House and Senate ballots this year, 36 percent received A’s and 40 percent received F’s, making 2022 the third election in a row in which the N.R.A. assigned more F’s than A’s.

While Republicans have always supported the N.R.A. in larger numbers, it was not long ago that the group also had meaningful Democratic backing: In 2012, 70 Democrats running for the House or Senate received A’s. That is now unheard-of. The last Democratic incumbent with an A rating was Collin Peterson of Minnesota in 2020, when he lost re-election.

Most incumbents received the same grade this year as the last time they ran, which is typical. Only 14 saw their grades change, seven in each direction.

Almost all of those incumbents were Republican: the seven who were upgraded and six of the seven who were downgraded. (The one Democrat was Representative Sanford D. Bishop Jr. of Georgia, who went from a C to an F; as recently as 2018, he had received an A and an N.R.A. endorsement.) The downgraded Republicans — Senators Lisa Murkowski of Alaska, Marco Rubio of Florida and Todd Young of Indiana, and Representatives Steve Chabot of Ohio, Tony Gonzales of Texas and David Joyce of Ohio — all went from A’s to B’s.

Mr. Rubio’s new grade reflected his decision to endorse limited gun restrictions after the Parkland, Fla., shooting in 2018. (Since senators receive ratings only when they run for re-election, this is the first year in which he has been graded since 2016.)

The other Republicans who were downgraded voted for the bipartisan gun bill that passed in June. It was the first time in nearly three decades that Congress — long held in check by N.R.A. lobbying — passed any significant restriction on guns.