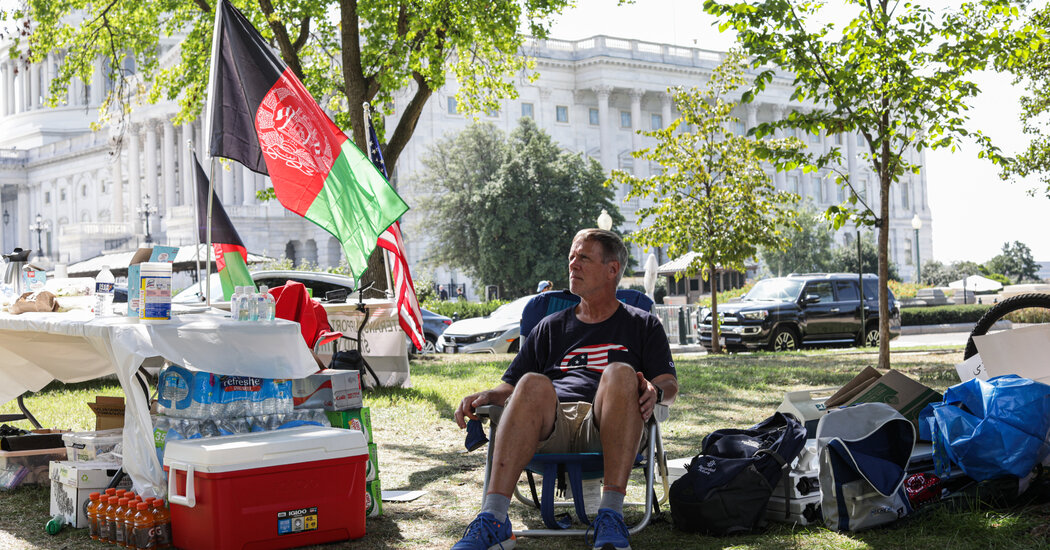 WASHINGTON — On the lawn outside the Capitol this week, the flags of two countries flew in protest: America’s and Afghanistan’s from before it fell to the Taliban.

Beside them stood supporters of Afghans who had risked their lives to help Americans during the decades-long war in Afghanistan — as translators, drivers and fixers — and had to flee the country last year when U.S. forces withdrew. About 82,000 were evacuated to the United States, but since then most have been living in legal limbo, with no long-term authorization to remain.

Military veterans and other supporters have been lobbying Congress for more than a year to provide Afghan evacuees with a pathway to permanent legal status in the United States. Many have only temporary authorization to stay, even though they will most likely never be able to safely return to their former homes. Now, they are pushing for legislation addressing the issue to be tacked onto a must-pass spending bill to keep government funded past the end of the month, when it is slated to lapse.

But despite support from the White House, a bipartisan group of senators and military veterans, a direct path to legal status for Afghans has proved difficult to establish amid opposition from some Republicans, who argue that the evacuees pose security risks. The measure is unlikely to be included in the spending package this month because of those objections.

“It’s an atrocity that it is taking so long to get this simple thing done,” said Shawn VanDiver, a Navy veteran and the founder of the group AfghanEvac, which supports resettlement efforts. “This shouldn’t be controversial. I wish we could show up for them like they showed up for us.”

The advocates have thrown their support behind a bipartisan bill called the Afghan Adjustment Act that would allow Afghans who have short-term humanitarian parole status — which typically lasts for two years — to apply for permanent legal status if they submit to additional vetting, including an interview.

The protest at the Capitol in support of the bill has continued for a week. “We’re not going until this gets done,” said Matt Zeller, an Army captain who served in Afghanistan and whose interpreter saved his life.

The measure, sponsored by Senators Amy Klobuchar, Democrat of Minnesota, and Lindsey Graham, Republican of South Carolina, is modeled off laws enacted after other humanitarian crises, like the Vietnam War. Similar statutes also were enacted after crises in Cuba, Nicaragua and Iraq.

The bill would allow evacuees who pass an added layer of security checks to seek permanent authorization to stay in the United States without wading through the yearslong bureaucratic burdens of applying and being approved for asylum. It is meant to address security concerns about the Afghan evacuees, who were chaotically rushed from the country as U.S. forces abruptly departed, prompting some to argue that they were not properly vetted for potential ties to terrorism or other criminal behavior.

About 3,500 of the evacuees brought to the United States are now lawful permanent residents, and more than 3,000 received special immigrant visas. Most of the others are in the country under the tenuous status of humanitarian parole.

The White House included the Afghan Adjustment Act in its request for the spending bill that must pass by Sept. 30.

“Afghans have found themselves in this real legal limbo because the U.S. government has essentially applied short-term Band-Aids for a population that needs long-term protection,” said Krish O’Mara Vignarajah, the president of the Lutheran Immigration and Refugee Service. “The Biden administration inherited a refugee program in ruin from its predecessors.”

Congress did not include a similar proposal in an emergency spending bill passed in May to help fund the war in Ukraine, despite President Biden’s call to do so.

Proponents argue that the lack of action reflects bias on the part of some policymakers against helping people from a majority-Muslim country when the United States has been far more welcoming to refugees from Ukraine, a mostly white and majority-Christian nation.

“The degree of support for Ukrainian refugees is appropriately and deservedly high,” said Senator Chris Coons, Democrat of Delaware and a co-sponsor of the legislation to help Afghan evacuees. “But Afghans, even those who served alongside us, have struggled somewhat to garner the same level of support. And that’s really regrettable.”

The difference is particularly acute for Afghans who are still abroad. Since the evacuation of their country ended, the United States has mostly stopped quickly accepting parole requests from Afghans who remain overseas. Many of those who are applying have fled Afghanistan, and there is currently no entity that processes applications from within the country, which is controlled by the Taliban.

A vast majority of humanitarian parole applications for Afghans abroad have yet to be considered or have been denied. After the initial evacuation, 48,900 parole requests were made on their behalf; only 369 had been approved through July.

By contrast, tens of thousands of Ukrainians have entered the United States on humanitarian parole.

Republicans argue that their opposition to granting a path to legal residency for Afghan evacuees is rooted in security concerns.

Stephen Miller, who was a senior adviser to President Donald J. Trump and a central figure in gutting the refugee program during his administration, argued shortly after the fall of Kabul that Afghan evacuees should not be allowed into the United States because they had not faced stringent vetting.

“If you bring in several provinces’ worth of individuals from Afghanistan, you will replicate the conditions in Afghanistan here in the United States of America and all the horrors that entails,” Mr. Miller said on Fox News last year.

Senator Charles E. Grassley of Iowa, the top Republican on the Judiciary Committee, has raised concerns on Capitol Hill about vetting, citing a report by the inspector general at the Department of Homeland Security that found that evacuees from Afghanistan “who were not fully vetted” were allowed into the United States.

“The vetting of those admitted to the United States in the wake of President Biden’s disastrous withdrawal from Afghanistan has been completely insufficient,” Mr. Grassley said in a statement.

Customs and Border Protection disagreed with the finding, saying that the agency had informed investigators in November that “all individuals were screened, vetted and inspected.”

Republicans have also complained that the State Department has not been forthcoming with information about its vetting process.

The lawmakers sponsoring the bill said it would ensure that Afghans who sought permanent residency would be held to higher security standards.

The bill would mandate screening “equivalent to the vetting they would have received if they were going to come here originally as refugees,” Ms. Klobuchar said.

Mr. Graham said his fellow Republicans had a “legitimate concern” about security, but those could be addressed by tightening the bill’s vetting requirements.

“These people have no place to go. Their country has fallen into hell,” he said of the Afghan evacuees. “There are security concerns, but here’s the overarching theme for me: We need to try to do right by these folks.”

For now, there is little sign that Congress is prepared to act, even as some of the Afghans say they would gladly submit to more vetting if it means a chance to stay permanently in the United States.

Arafat Safi, who was a senior official in Afghanistan’s foreign affairs ministry when Kabul fell to the Taliban and is now in the United States on humanitarian parole, said there was no way he could return to his country.

“I don’t see a way back to Afghanistan while these guys are there,” he said of the Taliban. “I have always wished a better future for my kids, a better place where they can be raised. So I believe the United States will be my home.”

Mr. VanDiver, who has been among the protesters outside the Capitol this week, said he became involved with the effort after an Afghan friend texted him from a mountain surrounded by the Taliban in August 2021.

“He asked me to grant his last request and help get his family out,” Mr. VanDiver said. “So I did. And I’m doing everything I can.”