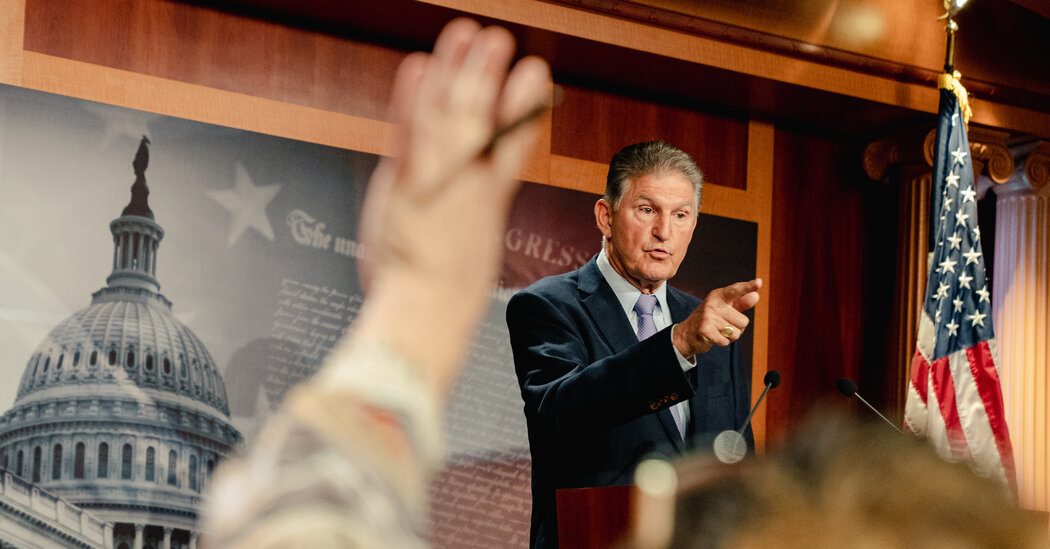 WASHINGTON — When Senator Joe Manchin III of West Virginia agreed in late July to supply his crucial vote allowing Democrats to pass their landmark climate change, health and tax legislation, he extracted a promise in return: Congress would pass a separate bill by the end of September making it easier to build a natural gas pipeline in his state.

Now lawmakers in both parties are balking over a deal they insist they were never a part of, prompting a dispute that threatens to derail a government spending bill that must pass by next weekend to stave off a shutdown.

Mr. Manchin has insisted that legislation to streamline the permitting of fossil fuel and energy infrastructure projects, including the West Virginia pipeline, be tied to the spending measure, which is expected to keep the government funded through mid-December.

It is the latest chapter in long-running tensions between Mr. Manchin and liberal Democrats, who have bristled at how the West Virginian has used his swing vote in the evenly divided Senate to scuttle or whittle down President Biden’s agenda and, when he has agreed to go along, demanded hefty concessions for doing so. Senator Chuck Schumer of New York, the majority leader, has said he intended to attach the two bills after the agreement.

The permitting bill, which would explicitly allow for the completion of the Mountain Valley Pipeline, a controversial gas project that passes through West Virginia, was left out of the climate legislation because it was being considered as a budget reconciliation bill, which allowed Democrats to shield the sprawling measure from a Republican filibuster but also strictly limited what could be included.

After the climate legislation became law, dozens of liberal lawmakers expressed concerns about the permitting measure, warning against weakening environmental protections, including the National Environmental Policy Act, which requires the government to study the impacts to the environment of any highways, pipelines or other major federal projects.

Senator Bernie Sanders of Vermont, the independent in charge of the Budget Committee, has said he would oppose Mr. Manchin’s legislation, meaning that at least 11 Republicans would need to back it in the 50-50 Senate to scale the 60-vote threshold to move it past a filibuster. Most Republicans have instead rallied around a more aggressive package unveiled by Senator Shelley Moore Capito, Republican of West Virginia.

“I’ve never seen stranger bedfellows than Bernie Sanders and the extreme liberals siding with Republican leadership,” Mr. Manchin said at a news conference on Tuesday. “What I’m hearing is that this is like revenge politics, and basically revenge toward one person: me. ”

Liberals remain bitter that Mr. Manchin single-handedly stymied many of their proposals to expand the nation’s social safety net and is now pushing legislation that would benefit the fossil fuel industry.

Republicans are still angry at the West Virginian for abruptly dropping his opposition to the climate, tax and health care package — the only thing stopping it from moving through the Senate — and allowing it to become law, handing Mr. Biden and Democrats a major accomplishment months before the midterm elections.

“We have Joe Manchin, who is trying to hide behind a fig leaf of an agreement he made with Chuck Schumer about trying to cut a little bit of that red tape,” Senator John Barrasso of Wyoming and the No. 3 Senate Republican, said this month. “If you’re now looking for Republicans to support and give you more cover than you have right now, you’re not going to find it with us.”

The deal with Mr. Manchin has further complicated the perennial autumn struggle on Capitol Hill to avoid a government shutdown. Negotiations on a bill to keep federal funding flowing were already mired in debates over emergency aid to Ukraine for its war against Russia, relief for states and territories affected by natural disasters this year and money to address the coronavirus pandemic and monkeypox.

The 91-page permitting legislation, which Mr. Manchin’s office released Wednesday evening, includes several provisions intended to help streamline environmental permitting for major energy projects. It would instruct agencies to complete environmental reviews required under the National Environmental Policy Act within about two years for major projects, and establish a time limit for court challenges after a project is authorized, according to a summary provided by Mr. Manchin’s office.

It would also require Mr. Biden to choose 25 energy infrastructure projects that would be prioritized for permitting, including projects to produce and process fossil fuels and electric transmission projects.

Some Democrats and environmental groups objected that those changes would make it easier to build oil pipelines, liquefied natural gas terminals and other fossil fuel infrastructure that will undermine progress on climate change while also making it more difficult for communities to challenge harmful projects. Approving completion of the Mountain Valley Pipeline would have the climate impact of 23 new coal-fired power plants and threaten neighborhood water quality, they said.

Yet a number of clean-energy advocates and some leading climate hawks in the Senate argue that such changes are necessary to create the clean-energy revolution promised by the law’s $370 billion in new climate spending.

Mr. Biden has vowed to cut United States emissions roughly in half by 2030 and for the American economy to stop adding carbon dioxide emissions to the atmosphere by 2050. That means not only eliminating the burning of oil, gas and coal but building the wind farms, solar parks, transmission lines and other infrastructure needed to pivot the nation to clean energy.

“We need to be able to deploy faster,” said Jules Kortenhorst, the C.E.O. of Rocky Mountain Institute, a Colorado-based nonprofit group that focuses on the clean-energy transition.

The Progressive Policy Institute, a centrist Washington think tank, released a study finding that renewable energy projects take an average of 2.7 years from proposal to permit decision, while transmission projects take an average of 4.3 years. Pipelines fall in the middle of those — an average of 3.5 years, and that goes not just for oil and gas pipelines but also ones that could one day transport hydrogen, which is derived from fossil fuels but produces fewer greenhouse gas emissions.

Senator Mitch McConnell of Kentucky, the minority leader, pressed on Wednesday for Mr. Manchin to endorse Ms. Capito’s alternative, adding that failure to do so could mean that the West Virginian had “traded his vote on a massive liberal boondoggle in exchange for nothing.”

Some House Democrats said they resented being asked again to accept a deal meant to meet Mr. Manchin’s demands — and having it tied to a must-pass spending bill that would force them either to swallow it or vote to shut down the government. Nearly 80 House Democrats have called for a separate vote on Mr. Manchin’s permitting package, though they have so far stopped short of threatening to oppose the spending bill. (A similar letter has circulated in the Senate.)

“The last thing that we need to do is imperil so many people’s livelihoods over a maneuver that is just ill-advised and frankly pretty unprecedented,” said Representative Alexandria Ocasio-Cortez, Democrat of New York, noting that thousands of federal workers would be affected by a shutdown. She added, “Is this the place where we really want to gamble on this? I don’t think they want to test it.”