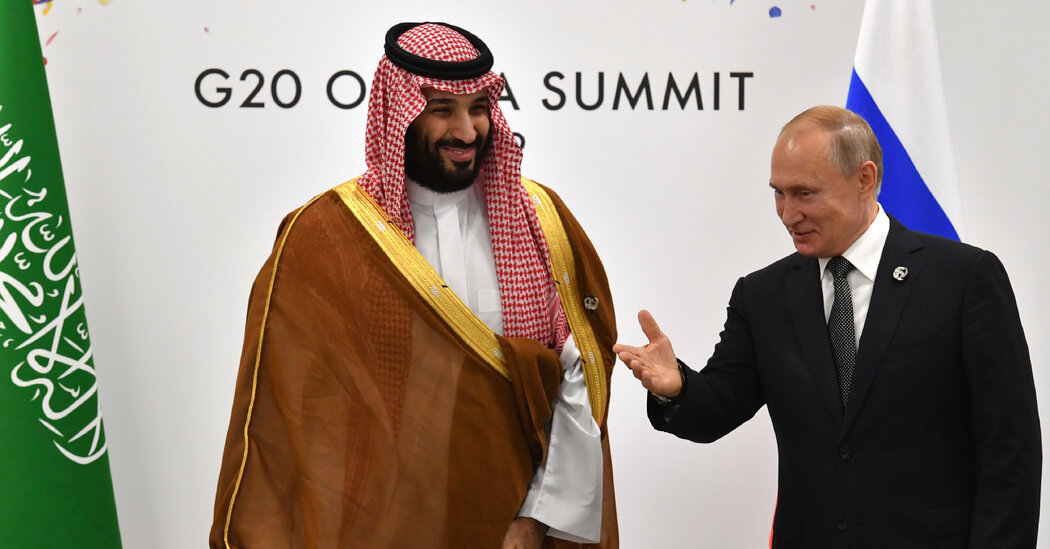 As Russia massed troops on its border with Ukraine and invaded the country at the start of the year, Saudi Arabia’s Kingdom Holding Company quietly invested more than $600 million in Russia’s three dominant energy companies.

Then, over the summer, as the United States, Canada and several European countries cut oil imports from Russia, Saudi Arabia suddenly doubled the amount of fuel oil it was buying from Russia for its power plants, freeing up its own crude for export.

And, this month, Russia and Saudi Arabia steered the Organization of the Petroleum Exporting Countries and its allied producers to reduce output targets in an effort to prop up global oil prices, which were falling, a decision that should increase the oil profits of both nations.

Taken together, the moves represent a distinct Saudi tilt toward Moscow and away from the United States, which it has typically aligned itself with. The Saudi position falls short of an outright political alliance between Crown Prince Mohammed bin Salman of Saudi Arabia and President Vladimir V. Putin of Russia, but the two leaders have established an arrangement that benefits both sides.

By working more closely with Russia, the Saudis are effectively making it more difficult for the United States and the European Union to isolate Mr. Putin. As Europe gets ready to greatly reduce how much oil it imports from Russia, Saudi Arabia and countries like China and India are stepping in as buyers of last resort.

During the Cold War, Saudi Arabia and the Soviet Union were bitter enemies. Saudi leaders helped finance the insurgency against the Soviet occupation of Afghanistan. But, in recent years, as hydraulic fracturing of shale fields has led to a boom in U.S. oil and natural gas production that undercuts the power of OPEC and other major oil producers like Russia, the two countries have come to see each other as valuable partners with similar interests. It probably helps that Saudi Arabia is an autocratic kingdom and that Mr. Putin has suppressed or eliminated most of his domestic political opposition.

After oil prices collapsed in late 2014 and 2015, Moscow and Riyadh collaborated to prevent U.S. companies from dominating the global energy market. In 2016, Russia and Saudi Arabia agreed to expand the oil cartel, creating OPEC Plus. Their partnership has proved enduring with the exception of a brief falling out in early 2020, when the start of the coronavirus pandemic led to a collapse in oil prices and the two countries disagreed on what to do.

“The Russians and Saudis have a similar interest in driving up the price of oil, and the Ukraine war has only reinforced that,” said Bruce Riedel, a former Middle East analyst for the Central Intelligence Agency and the author of “Kings and Presidents: Saudi Arabia and the United States Since F.D.R.”

Saudi officials have found Russia to be a useful partner in managing OPEC Plus, an often fractious group of oil producers with different ideas of how to manage oil supplies and prices.

The group works closely with Alexander Novak, a former Russian energy minister who is now deputy prime minister. Analysts describe him as willing to sit with ministers of other oil-producing countries for hours to hear their plans, concerns and grievances.

By announcing a small trim of production earlier this month, OPEC Plus demonstrated its independence from President Biden, who in July visited Saudi Arabia and exchanged a fist bump with Prince Mohammed. The visit was widely interpreted as an effort by Mr. Biden to restore U.S.-Saudi relations after he criticized the country during the 2020 U.S. presidential election for the killing of Jamal Khashoggi, the Washington Post columnist.

For months, the president has been encouraging Saudi Arabia to produce more oil. The cartel’s cut in production reversed its policy of gradually increasing production.

Saudi Arabia has often allied itself with the United States, including by quietly backing efforts to improve relations between Israel and its Arab neighbors. Now, some analysts said, the kingdom appears to be putting a greater emphasis on its financial interests by working closely with Russia even as the United States and Europe seek to isolate and punish Mr. Putin for invading Ukraine.

“It’s pretty remarkable that Russia has been able to keep Saudi Arabia on side,” said Jim Krane, a Middle East expert at Rice University. “Putin’s goal is to get between the U.S. and its allies, and, in the case of the U.S. relationship with Saudi Arabia, Putin is making some progress.”

Oil executives in the Persian Gulf say Saudi Arabia and other Gulf countries are merely doing what is best for them.

Some Middle East energy executives said the United States and other Western countries had not been reliable partners to oil exporters, in large part because they sought to wean the world off fossil fuels in an effort to address climate change.

“Years of schizophrenic energy policy in Europe and the U.S. have resulted in significant energy security vulnerabilities that large producers are adapting to,” said Badr H. Jafar, the president of Crescent Petroleum, an oil company in the United Arab Emirates. “And the energy chessboard is likely to keep shifting in the months and years to come.”

Many of Saudi Arabia’s moves with respect to Russia can also be interpreted as opportunistic decisions to make easy money.

When the share prices of Gazprom, Rosneft and Lukoil — the three major Russian energy companies — tumbled early this year because of Western sanctions, Kingdom Holding Company, which is run by a Saudi prince, Alwaleed bin Talal, swooped in and invested roughly $600 million in them, according to regulatory filings.

The investment represented nearly half of the firm’s new global equity investments in the first half of the year, and came at a time when many Western companies were announcing that they would leave Russia. It was one of the largest such Saudi investments since the sovereign wealth fund announced a $10 billion fund to invest in Russia in 2015, though it is unclear whether Saudi Arabia actually invested all of that money.

“This major Saudi investment in the Russian energy sector is an effort to further align Saudi and Russian interests in maintaining prices,” said Gregory Gause, an expert in Middle Eastern politics at Texas A&M University.

In April, Saudi Arabia and its closest ally, the United Arab Emirates, began ramping up heavily discounted imports of Russian refined fuel oil to use in their power plants. By importing those fuels, Saudi Arabia could sell more of its crude oil to other countries at elevated prices.

Much of that fuel oil once went to the United States, where Gulf Coast refineries processed it into gasoline, diesel and other fuels. But the United States banned Russian oil imports in March, leaving Russian exporters scrambling to find other buyers and offering the fuel at relatively low prices.

Other countries like China and India also bought Russian oil, often at a discount of 30 percent or more. Saudi purchases of Russian fuel oil are declining as summer ends but could increase again next year.

Saudi-Russian relations have historically been multifaceted and have only rarely aligned completely. The two countries have supported a faction in Libya seeking to take control of the violence-torn country. But Russia has long maintained close relations with Iran, Saudi Arabia’s biggest rival, including regarding the civil war in Syria.

Prince Mohammed has not said much publicly about Russia’s war in Ukraine. But at the United Nations in March, Saudi Arabia joined an overwhelming majority of countries in voting for a resolution that denounced the invasion. The kingdom has also increased oil sales to Europe, replacing some of the oil that countries there once purchased from Russia.

“From the Saudi standpoint, they certainly don’t want to get themselves in the middle of a Western-Russian dispute,” said Helima Croft, the head of global commodity strategy at RBC Capital Markets.

But that reluctance should not be mistaken for neutrality, other experts said.

“I think M.B.S. wants to play in the big leagues, and whatever gives him that opportunity, he’ll be opportunistic about it,” said Robert W. Jordan, who was the ambassador to Saudi Arabia in the George W. Bush administration. “If there is a way to help Putin, fine, and, incidentally, it doesn’t hurt that he is able to show that he is independent of American influence.”