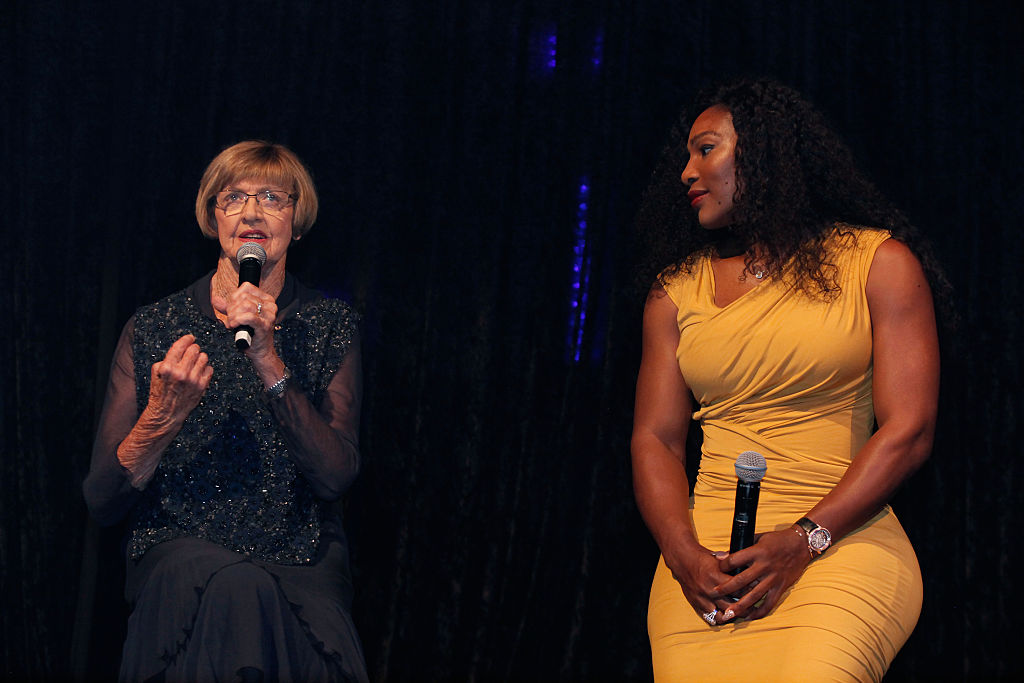 Actually, yes I am. We all are. We’ve all seen time and time again that nothing gets white folks foaming at the mouth like a Black woman’s confidence. That’s why if you read through the comment section of any Serena Williams news post, you’ll see mixed reactions. You’ll see plenty of people of all races praising her strength, achievements, grace and overall amazingness, but you’ll also see plenty of comments demanding that she check her ego and adhere to their standard of classiness, typically by non-washcloth users who just don’t like her attitude and can’t stand all the fanfare that has surrounded her throughout her and her sister Venus‘ careers.

And don’t let people get to calling her the greatest athlete of all time or the GOAT of tennis or even the GOAT of women’s tennis—then the gloves are off, and the white knuckles are turning red from rage-typing on their keyboards while expressing their outrage about the woman who dominated the game and the spotlight for more than 20 years.

And now that Serena’s tennis career has come to a spectacular end, the hater-hive is scrambling to disprove the popular opinion that Serena is the greatest women’s tennis player to wrap her hand around a racket. And they keep bringing up one name: Margaret Court.

Now, if you’re like me and you’re reading that name for the first time, you might be thinking, “Who the hell is Margaret, and what does she have to go to Court for?” Well, Margaret Court is an 80-year-old Australian woman who was once a tennis player. In fact, she was once a tennis champion who won 24 Grand Slam singles titles—which means she won one more Grand Slam singles title than Serena did—and now she appears to be very upset that the younger Williams sister hasn’t given her the flowers she believes she deserves.

“Serena, I’ve admired her as a player,” Court told Britain’s Daily Telegraph, according to ESPN. “But I don’t think she has ever admired me.”

Court said she has become a persona non grata in the tennis world because of her Christian beliefs, which led her to oppose same-sex marriage when it was proposed in Australia.

“A lot of the press and television today, particularly in tennis, don’t want to mention my name,” she said. “The honor has not been there for what I did do. In my own nation, I have been given titles, but they would still rather not mention me.”

Awww—poor thing. It appears that the tennis world is treating Grand Slam Karen the way she would like to see homosexuals treated, only without eroding her civil protections. A shame.

Court also defended herself against the idea that the only reason she won one more title than the GOAT is that she played at a time when Grand Slam was an amateur game and she has never been up against the same competition Serena has. (Writer Michael Harriot actually did an excellent Twitter thread on that, so I’ll go ahead and share it before I move on to Betty Spite’s grievances.)

“I often hear Billie Jean [King] saying that people didn’t come down to Australia in my early years,” Court said. “But Maria Bueno, the world No. 1, came down. So did Christine Truman, Ann Haydon, Darlene Hard. Plus, Australia had some wonderful players. We had five girls in the top 10. Lesley Bowrey won two French Opens.”

But Petty White’s most egregious, caucasified comments came when she tried to claim true GOAT status based on who had more wins while being a mother.

“Serena has played seven years more than I did,” Court said. “I finished in my early 30s. People forget that I took two years out. I first retired … when I was 25, thinking I would never return to tennis.”

“I got married, had a baby, but then had one of my best years, winning 24 out of 25 tournaments.”

“I came back after two babies. After having the first baby, I won three out of the four Slams,” she said adding that “Serena hasn’t won a Slam since” having a baby.

First of all, Segregetty Lite, Serena literally won at the Australian Open in 2017 WHILE EIGHT WEEKS MOTHER F******* PREGNANT!!  But really the main issue here is the fact that Court is mad that Serena hasn’t returned her supposed admiration—but how much could Court admire Serena really when she spent a whole interview talking about the champ like she ran over her poodle?

And remember when I said Court’s tennis-after-motherhood comments were the most egregious, caucasified remarks she made? Well, I was lying about that. Nah, Margaret Court’s most white-tastic comments came when she implied Serena experienced more privilege during her career than she did.

“I would love to have played in this era. I think it’s so much easier,” she said. “How I would love to have taken family or friends along with me. But I couldn’t. I had to go on my own or with the national team. People don’t see all that,” Court said.

“We didn’t have psychologists or coaches with us. It’s a whole different world. That’s what disappoints me–that players today don’t honor the past of the game,” she added.

I wonder if Court would “love” to have played in Serena’s skin. Would she have loved to play a historically white-exclusive sport as a dominating Black woman?

What would Magaret Court’s list of grievances look like if her Black body was mocked by a white woman who stuffed and padded her bra and hind parts to fake thickness while on the tennis court to the laughter and applause of the predominately white audience? What if a racist cartoonist mocked her by making her look like a wild beast with big sambo-era blaxploitation energy, all because she has her emotional moments on the court?

The fact is, both Serena and Venus have grappled through racist and sexist attacks their entire careers because white people don’t like Black woman’s attitudes. To them, it reads like arrogance when Black women are unapologetically confident. It read like entitlement and classlessness when Serena or Venus lost their heads a bit on the court because of their passions for the game. Meanwhile, John McEnroe spent his whole career losing his sh** on the court and all it did was make him a moderately controversial player while low-key adding to his legend.

Maybe they just hate Black women. And maybe Serena Williams hasn’t voiced her admiration for Margaret Court because WHO EVEN IS SHE?

What’s Next For Serena Williams? 5 Ways She Can Still Win After Tennis