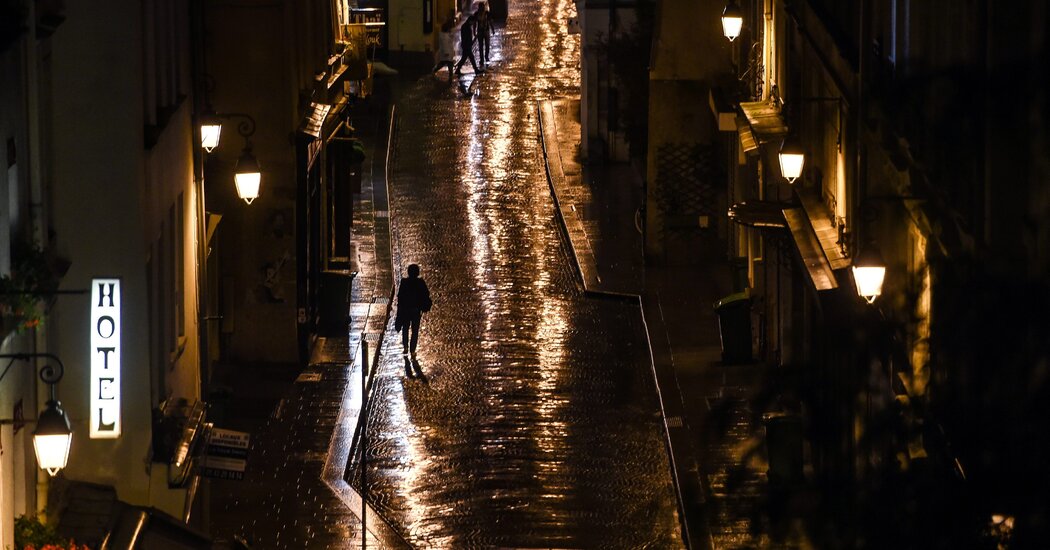 A factory making iconic French bistro glasses is idling its furnaces to offset soaring energy costs. Cities around France are turning off streetlamps and other outdoor lighting to curb electricity use. In Normandy, some schools will start heating classrooms by burning wood to conserve natural gas.

As Russia tightens its chokehold on Europe’s energy supplies, France is embarking on its biggest energy conservation effort since the 1970s oil crisis. President Emmanuel Macron’s government is calling on the French to prepare for a new era of energy “sobriety” to face down the threat of a hard winter, while reassuring households and businesses about the government’s ability to protect them.

“We have been confronted with a series of crises, one more grave than the other,” Mr. Macron said in a televised speech to the nation late last month. “The picture that I’m painting is one of the end of abundance,” he added. “We have reached a tipping point.”

The national effort calls for businesses and individuals to embrace energy conservation by increasing car-pooling, lowering thermostats and shutting off illuminated advertising signs at night — to name a few — or face the risk of rolling blackouts or energy rationing.

On Friday, Agnès Pannier-Runacher, the energy transition minister, sought to reassure wary citizens, saying the government would try to “avoid restrictive measures” over energy use in the peak winter cold season.

The government has been spending lavishly — over 26 billion euros ($26 billion) since Russia’s invasion of Ukraine — to keep gas and electric bills affordable, and last week it announced that its cap on household energy bills would be extended until the end of the year. The moves to control energy costs, including the re-nationalization of the energy provider EDF, have helped give France one of the lowest inflation rates in Europe, at 6.5 percent. (The overall eurozone rate for August was 9.1 percent.)

But with food and fuel costs still straining French families, Prime Minister Élisabeth Borne has called on businesses to make the bulk of the nation’s energy savings — fast. Companies will be required to cut their energy use by 10 percent or face enforced rationing of electricity and gas.

Businesses will have to appoint an “ambassador of energy sobriety” this month, and present blueprints to the government for cutting their electricity consumption.

France is hardly alone in scrambling to confront a severe energy crunch brought on by Russia’s grinding invasion of Ukraine.

Countries including France have increased reserves as Gazprom turns off the taps: This weekend, France’s gas storage facilities were 92 percent full. Even so, energy bills for households and businesses have soared, prompting European governments to resort to a range of offsets that few would have thought possible before the war.

Germany, Europe’s biggest user of Russian gas, is moving toward reversing plans to shut down its last nuclear power plants by the end of the year, and on Sunday announced a $65 billion aid package to ease the burden of high energy costs on citizens. Italy is looking to Algeria as a potential new supplier of natural gas to replace Russian fuel. In Spain, the government has begun a huge effort to improve energy efficiency in buildings and in industry.

France would seem to be less vulnerable than its neighbors: It boasts the biggest nuclear energy arsenal of any European Union country, and is one of the least reliant on Russian natural gas. But France faces an energy crisis of its own, as its nuclear industry addresses cracks, corrosion and other troubles that have forced EDF to temporarily shut down 32 of France’s 56 nuclear reactors.

Instead of pumping vast amounts of electricity to Britain, Italy and other European countries pivoting from Russian fuel, France now faces the unsettling prospect of initiating rolling blackouts in winter and having to import power or resort to coal-fired plants to meet its energy needs — scenarios the government is desperate to avoid.

The crunch is already starting to force temporary shutdowns at energy-intensive companies, including steel, chemical and glass makers. On Friday, wholesale electricity prices for 2023 in France set a record, surging past €1,000 per megawatt-hour. Many French companies and retailers buy their electricity with three-year contracts that are set to expire, meaning they will have to be renewed at peak prices.

Duralex International, the maker of classic bistro wine and water glasses, announced last week that it would put its furnaces on standby for at least four months starting in November and place its 250 employees on furlough to save energy and cash.

The company said it had been facing “for several months very unfavorable financial production conditions, solely linked to the price of energy,” which exploded after the Russian invasion of Ukraine.

“Producing at the daily price energy rate would generate unsustainable losses,” José-Luis Llacuna, president of Duralex, said in the statement, adding that he didn’t expect the factory to restart until the second quarter of 2023.

At Cristal d’Arques, the French maker of elegant crystal wine goblets, 1,650 of the company’s 5,000 employees will be put on partial furlough through year-end. Guillaume Rabel-Suquet, the communications director, told French television that the company’s gas bill quadrupled from the end of last year, to €75 million, and could reach €260 million in 2023 if prices don’t drop, making operations “economically unviable.”

The government has tried to offset some, but not all, of the pain for companies, although it recently announced a special €3 billion fund to help businesses that can’t pay their energy bills.

A 4 percent cap on increases to household electricity prices that began last winter will be extended until the end of the year, and will continue into 2023 for vulnerable families, France’s finance minister, Bruno Le Maire, said last week. The price ceiling is a stark contrast to an 80 percent increase in energy bills that households in Britain are expected to face next month.

Without the cap, French inflation would be about three percentage points higher, the French statistics agency Insee said in a report issued Friday.

Nonetheless, French citizens will have to pull their weight, Ms. Borne cautioned. In recent days, the government issued announcements calling on the French to curb a range of activities, in hopes of collectively saving energy. Among them: refraining from running washers at night, keeping thermostats at 66 degrees Fahrenheit and increasing use of public transportation.

Towns and cities across the land were urged to double down on energy savings in almost any way they saw fit. Many municipalities outside Paris started closing swimming pools intermittently this summer to save money. Other cities are restricting public lighting, which can account for over 40 percent of electricity bills.

The town of Thouars in western France has been turning off streetlights from 10 p.m. to 6 a.m. since June and plans to replace bulbs with LED lighting. Strasbourg, a mid-size city on the German border, will close museums two days a week instead of one.

In northern France, some high schools in Brittany will lower their thermostats, while the neighboring region of Normandy will experiment with using wood-burning furnaces for heat in some schools as an alternative to gas.

And businesses have until October to submit their plans for cutting electrical consumption by 10 percent.

“We need a radical change,” Ms. Borne said. “Everyone must ask themselves what they can do to consume less.”