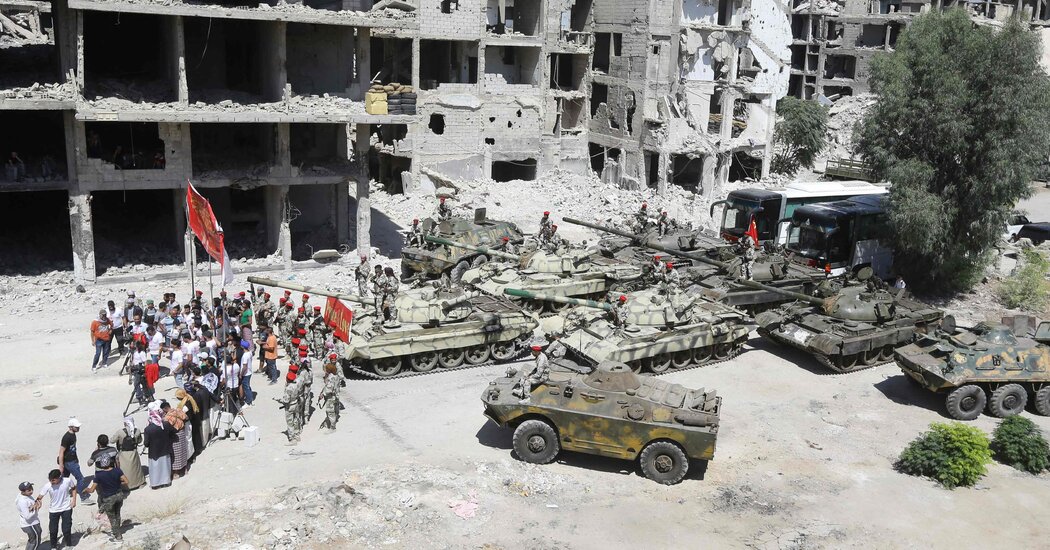 At first the image didn’t make much sense: tanks bunched together, red flags flying and a line of soldiers in Yemeni-style red berets. The scene was set in the shadows of bombed-out apartment buildings that, confusingly, didn’t look much like Yemen.

The scene was fake, a photo of the set of “Home Operation,” a film produced by Jackie Chan and inspired by a Chinese mission to evacuate Chinese and foreign nationals from Yemen in 2015. The apartment buildings were real, but not in Yemen. Filming started last month in Hajar al-Aswad, a southern suburb of Damascus, Syria, that used to be home to thousands of people.

In the photo Hajar al-Aswad looks like an old ruin from an old conflict, repurposed as background for the heroics of Chinese film stars. But when the Syrian revolution began, in 2011, Hajar al-Aswad was an opposition stronghold. It was captured by the Islamic State around 2015 and then retaken in 2018 by forces loyal to President Bashar al-Assad. The bombardment almost completely leveled it. Now it is the longed-for neighborhood of the inhabitants who were forced to abandon it.

Filming a Chinese blockbuster in an area destroyed by Mr. al-Assad is a cinematic looting that, we can assume, benefits the man who bombed it in the first place — who can film in the suburbs of Damascus without the permission of the regime? Mr. al-Assad would like to paint a picture of a post-conflict Syria and even hopes the world will buy it. The trouble is, it’s not the real one.

Rebels still hold much of the northwest of Syria, where many of the internally displaced live in camps, and the regime and Russia bombs the area regularly. The regime is also still battling an insurgency in Dara’a, the southern city where the anti-government uprising began in 2011.

Elsewhere in the country life is far from normal. The U.N. estimates that over 300,000 civilians have been killed in Syria since 2011, around 1.5 percent of the population and most likely an underestimate. Mr. al-Assad’s scorched-earth policy has driven millions from their homes; most are internally displaced but many have fled abroad. The country’s infrastructure and economy are destroyed, and the price of basic foods is estimated to have risen by 800 percent since 2011.

This is Syria in 2022, but you might be forgiven for thinking otherwise. “Home Operation” is just the latest iteration of the regime’s campaign to get the world to see the country in a different light.

As the setting for Ahmad Ghossein’s 2019 film “All This Victory,” for example, about the 2006 Hezbollah-Israel war in Lebanon. Some scenes for “All This Victory” were filmed in Zabadani, a city in south-west Syria that was besieged and occupied by Hezbollah, the Lebanese Shiite militia allied with Mr. al-Assad. The dark irony of depicting Hezbollah resisting Israeli aggression on these sites was apparently lost on some — the film scooped three awards, including best film, at Venice Critics’ Week, an offshoot of the Venice Film Festival.

The regime’s other attempts at image overhaul have been a little scrappier: It has relied on travel video bloggers, or vloggers, and influencers to portray a safe, sanitized Syria and to discuss the war in — at best — ambiguous terms.

Consider the Japanese vlogger who visited Saidnaya, a city north of Damascus, in 2019 and toured its famous monastery but failed to mention its famous prison, a regime facility that Amnesty International has called a “human slaughterhouse” and that is still in operation even now. In June an anonymous defector and former gravedigger told U.S. senators that he received the bodies of victims of torture in Saidnaya twice a week.

Or the Irish vlogger who toured a food market in Aleppo and sampled bread and pastries, then walked through a vast demolished neighborhood to visit a soap factory.

The footage that makes it to social media suggests that the influencers who are allowed to enter the country are those who reliably parrot what they are told by their assigned guides. Their videos may reach thousands of people, but “Home Operation” is a little different. It is evidence, maybe, that Mr. al-Assad’s attempts to improve his image abroad are starting to bear real fruit.

“Home Operation” is produced by SYX Pictures, a Chinese company in the United Arab Emirates. China’s outgoing ambassador to Syria, Feng Biao, was photographed on the film set — near a red banner hanging from a Chinese tank that read “love and peace.” China is one of the few countries that has maintained diplomatic ties with Syria, but the U.A.E. has recently taken steps to normalize relations. Mr. al-Assad visited the Emirates in March — his first official visit to anywhere other than Russia and Iran since 2011 — and met with its president, Shaikh Mohammed bin Zayed Al Nahyan.

Ostensibly the Western consensus is still that relations with Mr. al-Assad cannot be resumed. But some international bodies are welcoming his government back into the fold, and each accreditation seems more ludicrous than the last. In June last year the World Health Organization appointed Syria to its executive board, even though the regime has repeatedly targeted health care facilities; UNESCO recently invited Syria to its Transforming Education Summit, despite the fact that the U.N. itself has documented almost 700 attacks on education facilities in Syria in the past decade; and in June, Interpol invited representatives of the regime to a conference on regional efforts to combat the drug trade. Syria has a thriving illegal drug industry, run by friends and relatives of the president.

If the hope is that cultural or diplomatic re-engagement will make Mr. al-Assad’s government change its behavior, there has been no evidence so far that that is the case. Only pressure could do that, but for now Syria is nowhere near the top of the West’s list of priorities.

Instead, it seems as though Mr. al-Assad is to be allowed to keep trying to make the world believe that the war in Syria is over and that his regime is its legitimate government. If he succeeds, the message to authoritarians elsewhere couldn’t be clearer: The world might not forgive, but wait long enough, the world will forget.