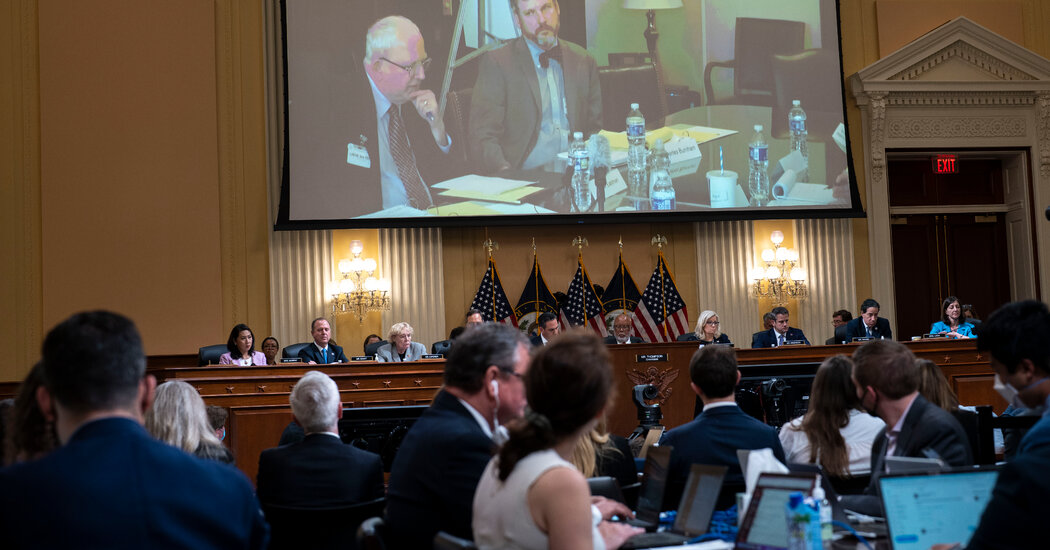 ATLANTA — John Eastman, the lawyer who developed strategies to block certification of the 2020 election, is “probably a target” in the criminal investigation into efforts to overturn Donald J. Trump’s election loss in Georgia, one of Mr. Eastman’s lawyers said on Wednesday. Mr. Eastman spent the morning appearing before an Atlanta special grand jury looking into the matter.

The assertion that Mr. Eastman could face indictment in the Georgia case came from Harvey Silverglate, a well-known Boston-area criminal defense lawyer and civil liberties advocate who is representing Mr. Eastman.

Mr. Silverglate said that his client had not been identified as a target by Fulton County prosecutors in Atlanta, as a number of other pro-Trump figures have been, including Rudolph W. Giuliani, the former New York City mayor who served as Mr. Trump’s personal lawyer after the November 2020 election.

However, in a phone interview on Wednesday morning, Mr. Silverglate said of Mr. Eastman: “I think he’s probably a target, but I don’t think he’s a legitimate target,” adding that he believed Mr. Eastman had broken no laws in Georgia.

“I don’t think my client is going to be convicted of anything,” Mr. Silverglate said. “If he is indicted, a motion to dismiss will end the case.”

An immediate legal threat to Trump. Fani T. Willis, the Atlanta area district attorney, has been investigating whether former President Donald J. Trump and his allies interfered with the 2020 election in Georgia. The case could be one of the most perilous legal problems for Mr. Trump. Here’s what to know:

What are prosecutors looking at? In addition to Mr. Trump’s call to Mr. Raffensperger, Ms. Willis has homed in on a plot by Trump allies to send fake Georgia electors to Washington and misstatements about the election results made before the state legislature by Rudolph W. Giuliani, who spearheaded efforts to keep Mr. Trump in power as his personal lawyer. An election data breach in Coffee County, Ga., is also part of the investigation.

The potential charges. Experts say that Ms. Willis appears to be building a case that could target multiple defendants with charges of conspiracy to commit election fraud or racketeering-related charges for engaging in a coordinated scheme to undermine the election.

In a brief phone interview after he left the Fulton County courthouse — where he appeared behind closed doors in front of the special grand jury — Mr. Eastman said that he never sought to overturn the November 2020 election but rather was calling for investigations into what he described as “illegality” in the process.

“We really take issue with the district attorney’s office appearing, apparently, to criminalize contested legal theories,” he said. In a statement, Mr. Silverglate and another of Mr. Eastman’s lawyers, Charles Burnham, said they advised Mr. Eastman “to assert attorney client privilege and the constitutional right to remain silent where appropriate” in Wednesday’s grand jury appearance.

Mr. Eastman was an obscure conservative lawyer until he emerged as a central figure in efforts to keep Mr. Trump in power in 2020 by deploying slates of fake electors in a number of swing states. His testimony in the Georgia case was sought by Fani T. Willis, the Fulton County district attorney, who was considering bringing a multi-defendant racketeering or conspiracy case over what she has characterized as “any coordinated attempts to unlawfully alter the outcome of the 2020 elections in this state.”

Mr. Eastman appeared remotely before a Georgia State Senate panel on Dec. 3, 2020, and made a number of false claims about the election, among them asserting that “the number of underaged individuals who were allowed to register” in the state “amounts allegedly up to approximately 66,000 people.” (The Georgia Secretary of State’s office has said that only four people under 18 registered to vote and all four were 18 by the time they voted.)

Citing such bogus irregularities, Mr. Eastman said “the election can’t be validly certified” and the decision “devolves back to the legislature.”

In a filing in July, Ms. Willis’s office pointed to the appearance, saying he had “advised lawmakers that they had both the lawful authority and a ‘duty’ to replace the Democratic Party’s slate” even though it “had been certified as the duly appointed electors for the State of Georgia.” Ms. Willis’s office also said there was evidence that Mr. Eastman’s “appearance and testimony at the hearing was part of a multistate, coordinated plan by the Trump Campaign to influence the results of the November 2020 election in Georgia and elsewhere.”

Recently unearthed email traffic shows that Mr. Eastman was continuing to search for evidence of election fraud even after Mr. Trump left office. Hours after President Biden’s inauguration, Mr. Eastman proposed in an email to Mr. Giuliani that they challenge the outcome of two runoff elections in Georgia for Senate seats that had been won two weeks earlier by Democrats. (The email was sent along with a plea to Mr. Giuliani to help him collect a $270,000 invoice to the Trump campaign.)

“A lot of us have now staked our reputations on the claims of election fraud,” Mr. Eastman wrote, “and this would be a way to gather proof.”

Norman Eisen, who served as special counsel to the House Judiciary Committee during the first impeachment and trial of Donald Trump, said that Mr. Eastman could be charged under the state’s Racketeer Influenced and Corrupt Organizations Act, often referred to as RICO, which makes it a crime to engage in patterns of activity in furtherance of a criminal scheme.

“The district attorney has made abundantly clear that she’s pursuing a RICO case, and Eastman is one of the masterminds of the alleged RICO enterprise here, led by Donald Trump but significantly enabled by Eastman and other attorneys to overturn the legitimate Georgia election results, and illegitimately, or unlawfully, foist a false electoral slate on Georgia and Congress,” Mr. Eisen said.

Mr. Silverglate said that Mr. Eastman’s efforts did not amount to a crime, noting that there were “no threats, no coercion” involved. “There was an attempt to see if they could find a way to change the results of the electoral count,” he said.

He added: “There was an attempt to see if there was a way forward. And I don’t understand how this is criminal.”

In the joint statement by Mr. Eastman’s lawyers, they said that the Georgia prosecutors had “set itself on an unprecedented path of criminalizing controversial or disfavored legal theories, possibly in hopes that the federal government will follow its lead. Criminalization of unpopular legal theories is against every American tradition and would have ended the careers of John Adams, Ruth Ginsburg, Thurgood Marshall and many other now-celebrated American lawyers.”

A spokesperson for the district attorney’s office declined to comment on Wednesday.

Mr. Eastman is also facing legal trouble outside Georgia. In June, federal agents armed with a search warrant seized his phone, stopping him as he was leaving a restaurant in New Mexico. And his activities have been excoriated by witnesses testifying to the House committee investigating the Jan. 6 attack on the Capitol. One White House lawyer, Eric Herschmann, was alarmed by Mr. Eastman’s activities and, using a vulgarity, advised him to “get a great” criminal defense lawyer. “You’re going to need it,” he recalled telling him.