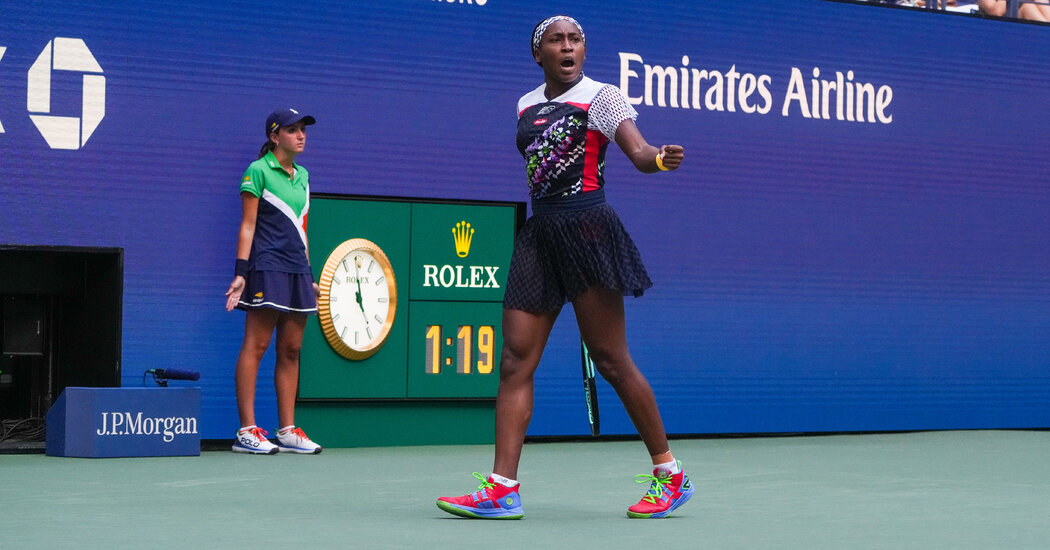 Gauff said that she would likely have lost a match like Wednesday’s in the past, but she has learned how to respond when her opponents take a lead.

The third round is the furthest Gauff has advanced in the U.S. Open. She was ousted in the second round last year and the first round in 2021. The last time Gauff made it this far in the tournament, she was just 15 years old, facing Naomi Osaka, who was then the reigning champion and held the world No. 1 ranking. Osaka defeated Gauff handily in that match, 6-3, 6-0, and Gauff walked back to her bench in tears before Osaka invited her to do the post-match interview with her.

“I’m going to learn a lot from this match,” Gauff said then, through tears.

At 15, Gauff became a marquee name in tennis after defeating Venus Williams at Wimbledon, when she was competing as the youngest player ever in the women’s main draw. She now has a signature shoe with New Balance, (she sported a luminous pink and green version of it Wednesday) and has a deal with the Italian food brand, Barilla, but she has yet to win a major title.

Unlike for Serena Williams’s first-round match Monday, Gauff said she would not be in the stands Wednesday because she would be receiving her post-match medical treatment and had a doubles match Thursday morning, but she would be watching on television in the stadium.

“Maybe at the end if it’s not too late I’ll catch the end of it,” Gauff said.

“If it goes those three sets I probably won’t be staying to the end, unfortunately. I would love to but that’s the problem when you have to play and when you like tennis as a fan, too.”