JARRELL MILLER is set to make his boxing return in KAZAKHSTAN – before agreeing to fight Lucas Browne a month later.

The American is on the comeback trail having spent three years out of the ring following multiple failed drug busts.

But he beat Ariel Esteban Bracamonte in June in Argentina, which was Miller’s first fight in almost four years.

The heavyweight then stopped Derek Cardenas a month later and is already lined up with another swift return.

Miller’s promoter Greg Cohen has told SunSport a fight against Ebenezer Tetteh on October 2 in Kazakhstan is confirmed.

Ghanian Tetteh has lost once in his 21 bouts, a knockout defeat to Daniel Dubois in 2019. 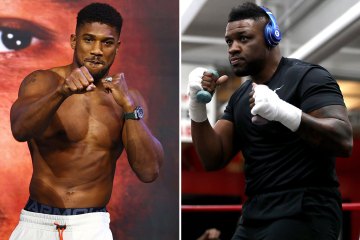 He has fought just once since then, beating Haruna Osumanu in March 2021.

Miller, 33, has a deal in place to fight Australian former champion Lucas Browne, 43, in November, according to Dan Rafael.

Browne knocked out Junior Fa in June on the undercard of Devin Haney’s undisputed title win over George Kambosos Jr.

Promoter Lou DiBella is said to have an option to host the Australian’s next bout.

And DiBella and Miller’s promoter Greg Cohen are believed to have agreed a deal for the heavyweight fight.

It could headline on November 13 in Abu Dhabi or be on the undercard on November 26 at The O2, where Dubois is due to fight.

He blamed his failed test before fighting Joshua on a tainted supplement and stem cell shots in his elbow.

AJ went on to suffer a shock loss, the first of his career, against stand-in Andy Ruiz Jr.

Miller in 2020 earned a contract with Bob Arum’s Top Rank stable but again tested positive for a banned substance.

This time the ex-kickboxer put it down to a SEX PILL and was handed a two-year suspension.

Miller enrolled in VADA testing in December 2020 and has returned clean drug tests since, which saw his licence reinstated this summer.