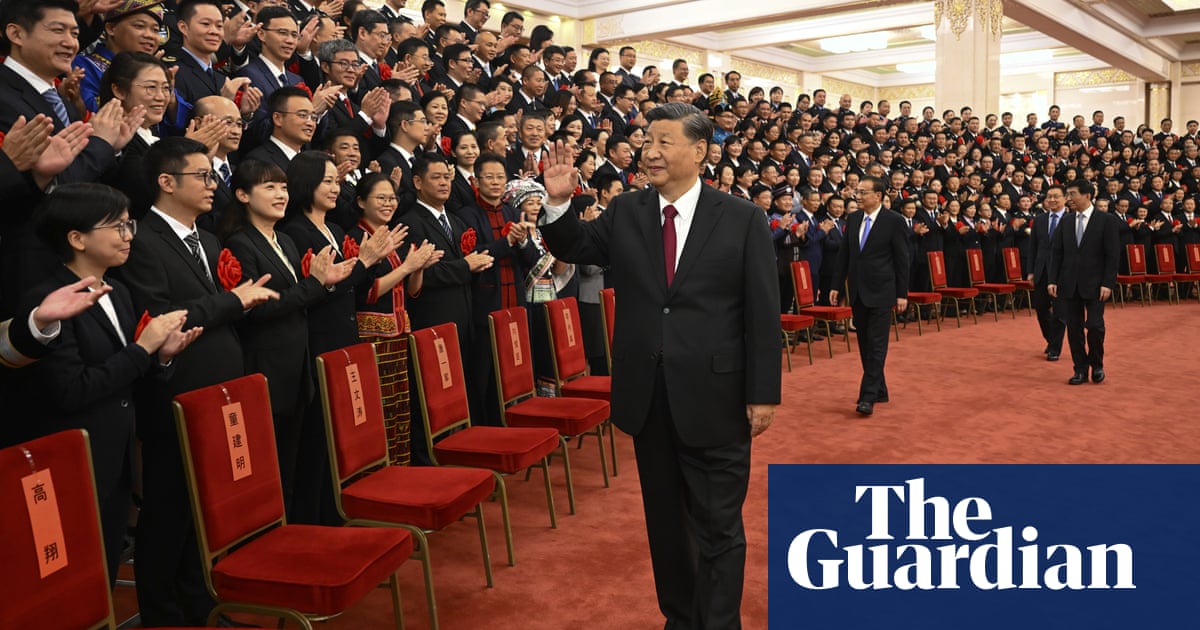 China’s ruling Communist party will begin its 20th congress on 16 October, state media has reported, a meeting at which President Xi Jinping is expected to be anointed as the country’s most powerful leader in decades.

The congress in Beijing comes as Xi faces significant political headwinds, including an ailing economy, deteriorating relations with the US and a strict zero-Covid policy that has accelerated China’s inward turn from the world.

It is widely expected to reinstate Xi as president for a third term – unprecedented in the contemporary era.

A new top leadership lineup is expected to be announced, as Xi consolidates his grip on the party and his position as the most powerful Chinese leader since the country’s founder, Mao Zedong.

The meeting – held every five years – will be “extremely important”, according to a report by the state broadcaster CCTV at a meeting on Monday of the country’s 25-member politburo, adding that preparations were “progressing smoothly”.

About 2,300 Communist party delegates from across the country will descend on Beijing in a highly choreographed exercise to pick members of the party’s central committee of about 200 members.

The final meeting of the current committee will take place in Beijing from 9 October, the report says.

The central committee will then vote for the 25-person politburo and its all-powerful standing committee – China’s highest leadership body and apex of power, comprising seven people.

Voting is mostly a formality – the pecking order of the politburo and standing committee is likely to have been decided well in advance. The overall duration of the congress is not yet clear.

Analysts predict no surprises at the congress in terms of format and timing.

“Most people will not be surprised to see that Xi Jinping will have a third term. I think this has been lined up for a while,” said Alfred Wu Muluan, a Chinese politics expert and associate professor at the National University of Singapore.

“He will increase the percentage of his supporters, particularly from Fujian and Zhejiang [where Xi previously held top positions], in the politburo … He can then count on their support for his fourth term in five years’ time.”

It is likely Xi will be anointed at the congress with the honorific title of “great leader”, Wu said, a term last used to refer to Mao Zedong.

Party propaganda organs such as its official newspaper, the People’s Daily, have already started using the term “people’s leader” to refer to Xi.

Wu added that the top leadership lineup was most likely set during the secretive two-week conclave of Communist party leaders held at the seaside town of Beidaihe in August.

During Xi’s decade-long tenure there have also been crackdowns on corruption within the party, which analysts say served to take down his political rivals, as well as the crushing of a democracy movement in Hong Kong and strict lockdowns on cities in the name of curbing coronavirus.

He has faced harsh human rights criticism from the international community over repressive policies in the north-western Xinjiang region, where an estimated 1 million Uyghurs and other Muslim minorities have been detained in a sweeping crackdown ostensibly targeting “terrorism”.

Xi also ushered in an assertive “wolf warrior” foreign policy that has alienated western democracies and some of China’s regional neighbours, and pushed for closer ties with Russia while cultivating domestic nationalism.

He abolished the presidential two-term limit in 2018 – originally set up by former leader Deng Xiaoping in the 1980s to prevent another Mao-like dictatorship – leaving the possibility of him becoming leader for life.

Over the past year, Chinese propaganda has worked in overdrive to bolster Xi’s legacy, diminish the achievements of his predecessors and further enshrine him in the highest echelons of the Communist party.

Analysts predict that at this year’s congress Xi will be looking to shorten the name of his official political philosophy in the party constitution to the pithier “Xi Jinping Thought”, putting him on par with Mao.