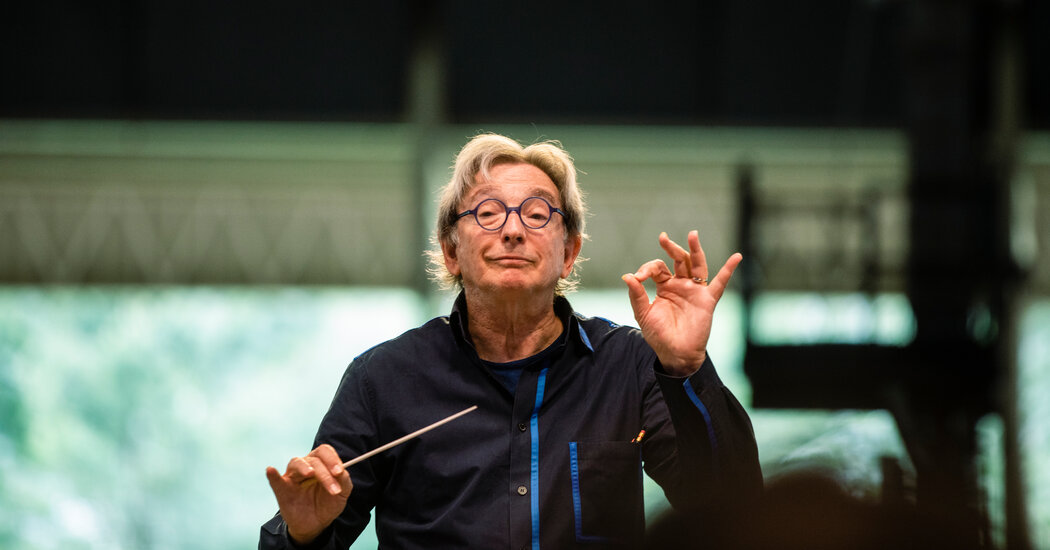 LENOX, Mass. — The conductor Michael Tilson Thomas, during his half-century career in music, has led many performances of Beethoven’s Ninth Symphony, with its rousing “Ode to Joy” finale.

But when he took the podium on Sunday at Tanglewood, the summer music festival here in the Berkshires, Thomas felt different. It had been more than a year since he was diagnosed with glioblastoma, an aggressive form of brain cancer, which has drained him of energy and forced him to confront his mortality earlier than he expected. He has emerged with new appreciation for the wonder in Beethoven’s music and the electricity of live performance.

“It feels really great,” Thomas, 77, said after the performance. “It feels restorative.”

Thomas, the former music director of the San Francisco Symphony, who has spent his career as a musician studying questions of time and existence, knows that his days are limited. He has taken bucket-list trips to Tahiti and Nova Scotia with family and friends; organized journals on life and art that he has kept for more than 60 years; and started contemplating the music to be played at his memorial service.

But he refuses to be confined by his illness. “Even in a situation where the time is short, whether in rehearsal or in life, you can accept and forgive yourself,” he said. “You can say, ‘I had this much time and this is what I could accomplish.’ And that’s fine. I am at peace with it.”

He has continued to compose and record favorite piano pieces. A devoted educator, he is working on a new set of videos exploring musical ideas.

And he is planning an ambitious slate of concerts through at least next summer, in San Francisco, Miami, Cleveland, New York and beyond, tackling Mahler symphonies, a specialty; cantatas by Olivier Messiaen; and a new cello concerto by the film composer Danny Elfman.

Thomas’s return to Tanglewood, where he led two programs with the Boston Symphony Orchestra over the weekend, was especially poignant. This was where his career took off: In 1969, after winning a prize here, he was named assistant conductor of the Boston Symphony, where he remained for more than a decade.

Some in the orchestra worried that cancer would prevent Thomas from making the journey to Tanglewood, his first appearance at the festival since 2018. But he arrived with energy and humor, mentioning his health struggles only briefly at the first rehearsal. During several days of intense sessions with the orchestra, he showed his trademark wit and fastidiousness, leaping from his stool when he wanted more energy from the players, and flashing a thumbs-up when they mastered tricky passages.

“He’s irrepressible,” said Lawrence Wolfe, the orchestra’s assistant principal bass. “He’s not going to let his illness overpower him. He doesn’t dwell on it. He simply rises above it.”

Before he was diagnosed with cancer, Thomas was at the height of his career, an elder statesman of classical music, known by the nickname M.T.T., who was revered for his mastery of the standard repertory and for championing American composers.

In 2020, after 25 years, he stepped down from the San Francisco Symphony, where he was credited with transforming the ensemble into one of the best in the nation. He also won accolades for being a founder of the New World Symphony, a training orchestra for young artists in Miami, in 1987.

Then, last summer, he learned he had glioblastoma, one of the most lethal forms of brain cancer, which also afflicted President Biden’s son Beau Biden, and Senator John McCain. His doctors estimated that he might have only eight months to live. He underwent surgery to remove a tumor and withdrew from performances for several months.

Frightened and exhausted, he struggled to come to terms with his diagnosis. He was also eager to stay busy.

“There was an initial moment of shock and sort of ‘OK, so I’m going to gird my loins here and finish and accomplish all these things,’” he said.

As he recovered from surgery, his outlook began to change. He became less focused on achievement and more interested in relaxation and deep thought. He was also eager to spend more time with loved ones, including Joshua Robison, his husband and manager.

“I began to accept and even be appreciative of those quiet moments of restfulness in which I could cast my mind back over people and experiences in music that connected us all in a profound way,” Thomas said.

Slowly, he has returned to the stage, making a triumphant appearance with the New York Philharmonic in November, his first concert since announcing he had cancer, followed by engagements in Los Angeles, Miami and San Francisco, where he lives.

In March, saying he was “taking stock of my life,” he announced he would step down as artistic director of the New World Symphony to focus on his health.

Though he often feels tired and sometimes has difficulty studying scores, his artistic instincts and drive remain intact. His illness has forced him to learn to be more efficient in his conducting, he said.

“I feel more exhausted, more on edge physically, more on the edge of my nerves, than I have felt over the years,” he said. “On the other hand, I’ve learned that I can make some wonderful things happen without having to push myself so much physically.”

In January, he appeared with the pianist Emanuel Ax in Los Angeles, in a program that included Brahms’s Piano Concerto No. 1. Ax recalled that Thomas was intensely focused on the music, seemingly determined not to let his illness interfere.

“You just felt like everything is going to go on the way it always has,” Ax said. “I know intellectually that’s not true, but that’s how he makes you feel. He’s handling this in just an incredibly positive and creative way.”

At Tanglewood on Sunday, Thomas and the musicians received a standing ovation from the audience of 7,000 that lasted more than six minutes. He basked in the applause, beaming as he shook hands with the players onstage.

After the concert, people lined up to thank Thomas and take photos. Many were in tears, unsure whether they might see him again at Tanglewood.

“You have brought so much musical joy into my life,” said Maressa Gershowitz, a Connecticut-based photographer who brought her children and grandchildren to the performance.

At a reception later that day, Thomas spoke about the potential of orchestras to achieve a “unifying sense of purpose” when they played pieces like the Ninth Symphony.

“There’s a unified dedication to making the music very special, and that’s totally what I felt in these last days with the wonderful members of the B.S.O.,” he said before a crowd of friends and musicians and staff affiliated with the Boston Symphony. “I was very grateful in this last part of my life to have the opportunity reconnect with them, and with you.”

Despite occasional setbacks, Thomas eagerly seeks out opportunities to make music, especially with close friends. On Monday morning, he invited the cellist Yo-Yo Ma to his rental near Tanglewood to fulfill a longtime wish, to play the piano part alongside Ma in Debussy’s Cello Sonata.

Ma said that he was struck by the imagination in Thomas’s playing, and that he felt questions of life and death have been palpable in the conductor’s music since his diagnosis.

“Everything that we see in culture deals with the space between life and death,” Ma said. “When you’re faced with such a severe diagnosis, you obviously are thinking about your whole arc of life.”

Thomas said that he felt “calm and resigned” about the possibility of death. As he has come to terms with his illness, he said that he had found comfort in a Buddhist teaching: “Things are not what they seem. Nor are they otherwise.”

“That seems to be so much the essential mystery of music and art and everything else,” he said.

Lately, he has been listening a song by Schubert, “Wandrers Nachtlied,” which he said reminded him of the need to let go of unimportant struggles. The text of the Schubert song reads:

Ah, I am weary of this restlessness!
What use is all this joy and pain?
Sweet peace!
Come, ah come into my breast!

“Why all this desire and pain still?” Thomas said. “For what next accomplishment? For what position? For what sized type will my name be printed in, any of that nonsense. These experiences have taken me further down the road of not caring about any of that any more. And now I can be at peace.”