EMILY Atack has hosted a wild boozy house party for her pals after returning from a sun-soaked holiday with her sister Martha.

The former Inbetweeners star took to her Instagram stories to document her evening – as she was joined by her boyfriend Liam McGough and her sweet pooch.

Emily, 32, posted snaps from her sleek kitchen back in London, showing off glasses of wine ahead of the wild night.

She filmed her Big Brother beau Liam, 37, as he played with her dog outside on her sprawling terrace, where she hosted her friends.

She went on to show off her glam look for the evening, which included a draping off-the-shoulder blue dress.

The actress paired her look with a long necklace and gold earrings as she pulled her blonde locks up into a sleek up do. 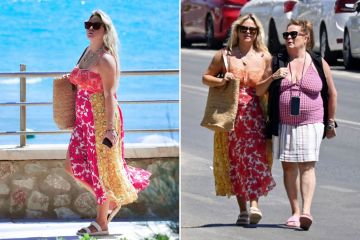 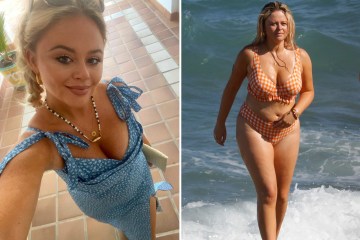 Emily completed her look with a dark smokey eye and nude lipstick as she posed with a pal while they sipped on champagne.

She went on to show her pals dancing on the terrace around a table packed with drinks, showing off her dart board in the background.

Getting in the bank holiday mood, she then filmed her beau Liam behind a pair of DJ decks as he kept the music pumping.

“Not taking it seriously at all,” she wrote over the snap of her beau, who could be seen donning headphones to control the sounds.

It comes after Emily was spotted looking stunning in a summery floral maxi dress as she holidayed with her family in Marbella.

The actress was joined by her mum Kate Robbins as they headed out to explore the local area on their sun-soaked holiday last week.

She completed her chic outfit with dark sunglasses, gold jewellery and appeared to go make-up free for the outing.

Meanwhile, her mum Kate, 64, opted for a strappy gingham top, showing off her ample assets, and a white skirt.

The actress has been enjoying a family holiday – with her sister Martha also photographed alongside her on social media.

Emily gave her fans another insight into her luxurious trip as she posed in a plunging blue dress.

Emily has been busy enjoying her Spanish holiday this week with her sister Martha – and was seen in a bikini as she splashed in the sea.