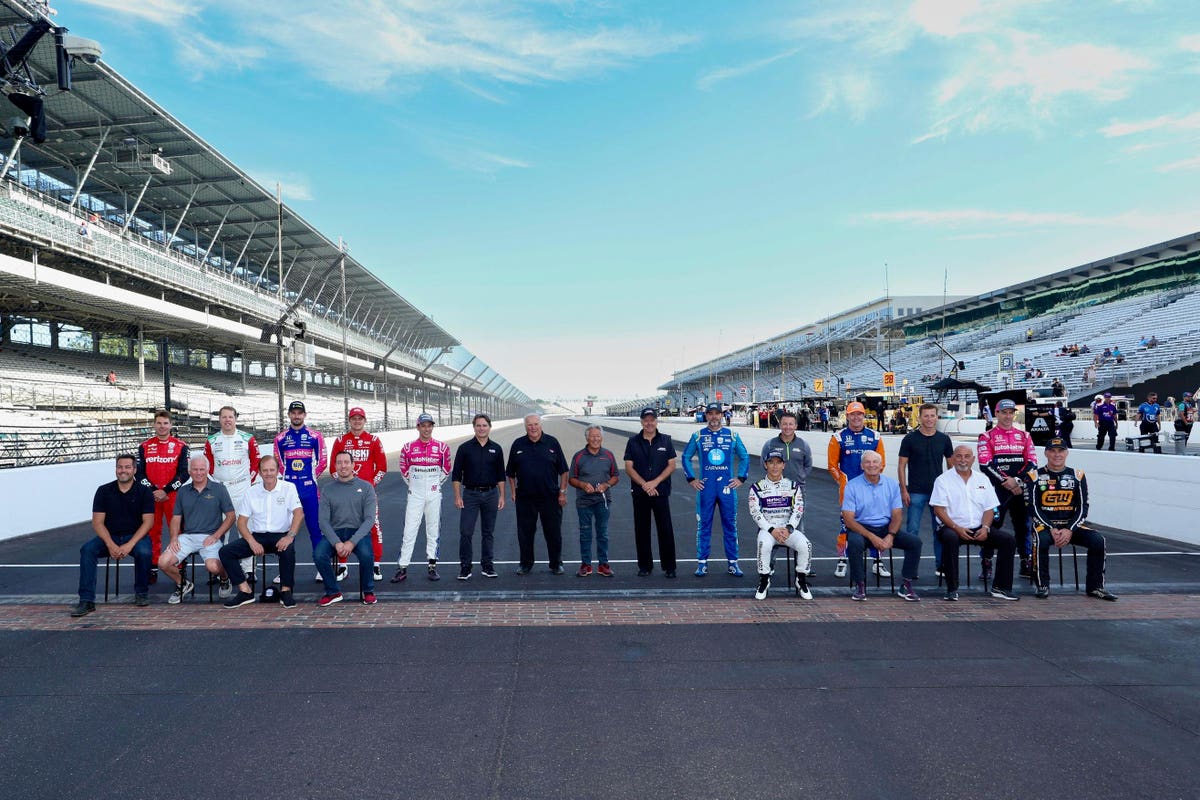 A simple idea resulted in a photo for the ages at the Indianapolis Motor Speedway at the famed “Yard of Bricks.”

It was such a big occasion, even 1997 Brickyard winner Ricky Rudd showed up, his first time at a race track since he retired from NASCAR following the 2007 season. He wanted to make sure he got to visit with two of his heroes, Mario Andretti and Rick Mears.

Sam Hornish, Jr., the 2006 Indianapolis 500 winner who later switched to NASCAR, got up early in the morning and drove down from Defiance, Ohio with his young son, Sam, III. It was the first time Hornish had been to Indy since he was honored for the 10th anniversary of his Indy 500 win at the 100th Running of the Indianapolis 500.

And, of course, the two greatest legends of them all took center stage as 88-year-old AJ Foyt, the first four-time winner of the Indianapolis 500 as a driver, and his longtime rival Mario Andretti took part in the photo.

Jarrett, who won the Brickyard 400 in 1996 and 1999, convinced Andretti to “kiss the bricks.” It’s a tradition that Jarrett started when he won the NASCAR race at Indianapolis in 1996.

Jarrett, winner of 32 NASCAR Cup Series races including three Daytona 500s and two Brickyard 400s along with the 1999 NASCAR Winston Cup Series championship, was deeply honored and humbled by the experience.

After showing up to a race track for the first time since 2007, Rudd told Indianapolis Motor Speedway President Doug Boles that it was “great therapy.”

Boles has a deep sense of the history and tradition the Indianapolis Motor Speedway represents. As IMS president, Boles is always looking for new ways to showcase the history of the facility along with the present and its future.

The past two years, the race was shifted to the 14-turn, 2.439-mile Indianapolis Motor Speedway road course and rebranded as the Verizon 200 at the Brickyard.

I spent time with Boles at the end of the IndyCar NASCAR Tripleheader at the Brickyard weekend to learn the backstory of bringing so many great drivers from both the Indianapolis 500 and the Brickyard for the iconic photo.

“It was one of the conversations we have as a team, when we start thinking about out to promote the events and some of the things that are cool,” Boles told me. “It was a collective effort.

“It was in the works for two weeks. It was a last-minute conversation of what we could do to create some buzz and excitement.

“Some of the drivers like Ricky Rudd didn’t get secured until the day before. We didn’t start reaching out to drivers until a week before the race.”

How was Boles able to convince Rudd, who walked away from NASCAR following the 2007 season and up to this point, never returned, to attend this event?

“Ricky wasn’t hard at all,” Boles proclaimed. “I sent him a text and said, ‘Hey, FYI, last minute. An impromptu thing for those winners that are here. Love for you to come if you plan on being here.’

“He texted back and said, ‘Oh, wow. The timing works out great. I’m in Oshkosh, Wisconsin and driving back home to North Carolina. I’ll just stop in Indianapolis, and we’ll do it in the morning and keep going.’

“The other thing about Ricky Rudd that was cool, he pulls up in a small travel trailer with a buddy. They had been at Oshkosh. It was a 30-amp trailer, we have 50-amp here, so we had to get him an adapter to plug in and find him a place to camp. Then, he calls up and said, ‘Guess what. All I have is cargo shorts. What am I supposed to wear?’

“So, we had our Pro Shop guy come in late Friday night, took him over to the Pro Shop and we got him shorts and a polo and all the stuff he needed. He is the only guy in the photo with shorts, but they aren’t camo cargo shorts.

“It was just cool to have him.

“When he left, he said, ‘That was therapy for me.’ It’s the first race track he has been to other than a go-kart track in North Carolina, since he retired in 2007. He was excited because he had never met Mario Andretti before. He got a chance to meet Mario Andretti, so that was very cool.”

Despite a full head of gray hair, Rudd remains fit and trim and looks like he could still climb into a race car and challenge for a victory.

Once he left NASCAR in 2007, he switched gears and runs mountain bikes, flies an airplane that he owns. Rudd and his wife Lynda, often visit their son, Landon, a successful media composer and music producer who lives in New York City. The couple split their time between homes in Florida and Cornelius, North Carolina.

“It has been a long time. You miss a lot of things. I miss this particular place because of the success here and when I was kid how much I looked up to this place. I’m just amazed at seeing all these guys that have won here and having them here at one time.

“I raced against AJ Foyt, and I ran again Arie Luyendyk in IROC. So, I did race against some of them.

“It’s amazing. A lot of these guys were before me and my heroes. To see everybody at one time, there is something special about it. I don’t know where I fit in, but I do have a Brickyard 400 trophy. I’m sitting here looking around and I’m in amazement of the people I’m looking at.”

But there were plenty of big names that were there representing both the Indianapolis 500 and the Brickyard 400.

“The idea wasn’t to force people to come in; it was there are a lot of them here any ways, so let’s take the people that are in town and get a photo together,” Boles explained. “AJ Foyt was on time, but everybody else was early. He made it and it seemed like he had a good time. He came up afterwards and said, ‘Roger and I were talking about how long we’ve been doing this together.’ I think AJ had a good time, too. People were excited about interacting with him.

“AJ isn’t big into doing things like that. It’s not his thing and I get it. He’s pretty private. To have him standing there with Mario Andretti and Jeff Gordon and Jimmie Johnson, those four are super iconic in our sport. To have them standing together is pretty neat.”

It was also a chance to see the little kid in some of the NASCAR driver’s eyes when they met Mears, Andretti and AJ Foyt.

“When I was texting with Jeff about coming, one of his questions was, ‘Who is going to be there?’ It was more like are those heroes coming?” Boles recalled. “We had Rick Mears, Helio Castroneves, drivers like that are pretty cool.

“Jeff Gordon’s text to me on Friday was, ‘I’m super pumped about it. I’m hoping American Airlines isn’t late. I’m scheduled to depart this evening. You have a good group of Indy 500 champs coming?’ I said, yes and he said, ‘Great, I’m so excited to be part of it. Man, it’s really special. Thank you for organizing it.’

“They all seemed to enjoy being together.”

One of the winning drivers was AJ Allmendinger, the first winner of the NASCAR Cup Series race after it was shifted from the oval to the road course in 2021. Because his victory was the Verizon 200 at the Brickyard instead of the Brickyard 400 on the oval, Allmendinger wondered if he got invited by mistake.

“Truthful answer, I didn’t feel like I belonged down there,” Allmendinger told me after winning the Pennzoil 150 NASCAR Xfinity Series race. “I was standing next to Jimmie Johnson and Rick Mears and AJ Foyt was there. That’s who I was named after. Arie Luyendyk. Mario Andretti was standing there. I asked, ‘What am I doing here? Did Doug Boles make a mistake and send to the wrong AJ?’

“That’s the coolest picture I’m ever going to have in my life. And I got there for something I accomplished, not because I snuck into the photo.

“It’s awesome. I didn’t really feel like I belonged there. It was pretty magical. I got to be there for something special that I did.

“That is the coolest photo I will ever have in my life.”

Allmendinger texted those same sentiments to Boles later that night. Brad Keselowski went one step further and suggested individual photos can be made where all the IndyCar drivers sign them, then all the NASCAR drivers add their autographs, and they could be presented to each driver in the photo.

One of the highlights came when Jarrett convinced Mario Andretti to “Kiss the Bricks.”

“I don’t know how that happened,” Boles said. “I was standing in the back and the next thing I know; those guys are kissing bricks together. Dale Jarrett started it. That tradition started at the Brickyard 400 in 1996 because of Dale Jarrett. To have Mario Andretti do that alongside of him is pretty cool.

“For Dale Jarrett to tell me on Saturday and again on Sunday that was one of the coolest things he has ever done is part of that.”

Andretti reflected back on that moment with me and shared his thoughts on why that was a great moment for the Indianapolis Motor Speedway this year.

“Dale Jarrett was the first one to start kissing the bricks,” Andretti told me. “I know what that means to him. After he won there in 1996, I sent him a letter. He said he still has it. He was telling me about it, and I could see the emotion in him. He and his dad are the good people in this world.

“When he asked me if we could kiss the bricks together, that was great. I loved that.”

Andretti loves being a part of racing history and believes the photo of the day, as well as the chance to talk to the icons of Indianapolis Motor Speedway is something he deeply appreciates.

“When you look back and see the decades that represents and the drivers from IndyCar and NASCAR, it brings back so many memories and reacquaintances,” Andretti said. “I don’t know how anyone cannot appreciate that.

“It was amazing how many of us were actually there. A couple of champions recently have left us, like the Unsers, but in general, I’m surprised how many are still with us.

“It takes a little bit of foresight and thinking ahead of time to come up with that idea. I give kudos to Doug Boles. He doesn’t his job and sees the opportunities and the value of doing something like that.”

It’s a photo that is a snapshot in time in the long history of the greatest race course in the world.

It’s a photo that can stand the test of time.

“I don’t think we thought about it from a marketing standpoint other than here is this photo that we can have and capture the moment,” Boles said. “Maybe we don’t do it every year, but every third year have this photo of the iconic folks that are here.

“I love the way this weekend helps marry IndyCar and NASCAR help each other and not feel like the two are competing against each other.

“When you take those iconic drivers alongside the iconic Indianapolis 500 drivers on that yard of bricks that means so much to everybody, that’s a pretty special moment.

“It was really cool.”