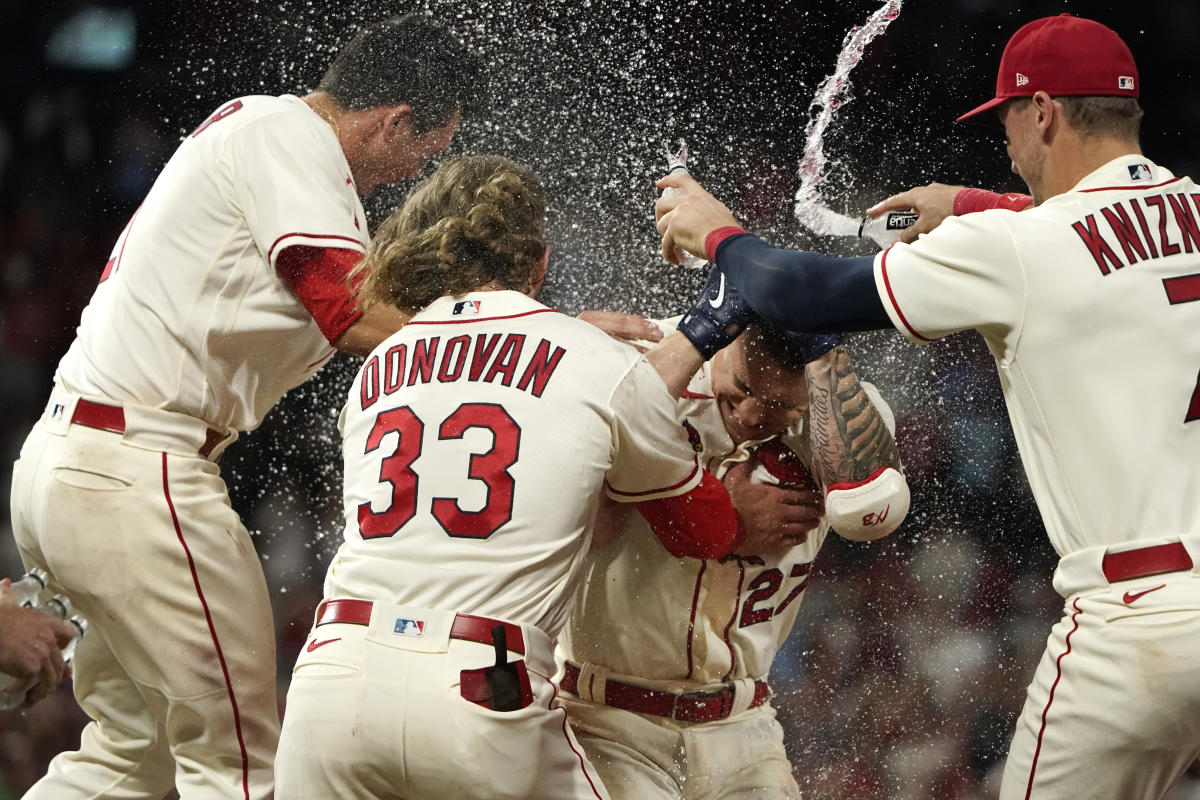 ST. LOUIS (AP) — Corey Dickerson tied the game with an infield single and Tyler O’Neill drew a bases-loaded walk, all in the bottom of the ninth inning, to give the St. Louis Cardinals a 6-5 win over the Atlanta Braves on Saturday night.

“This is a really, really good team,” Cardinals designated hitter Brendan Donovan said. “Any time you can beat a team like that down the stretch is good. Not that we needed a morale booster, but it kind of makes you feel better about yourself.”

Nolan Arenado and Andrew Knizner homered for the Cardinals, who claimed their sixth walk-off win of the season.

Donovan hit a one-out double off Kenley Jansen (5-1) in the ninth and advanced to third on a wild pitch. Jansen walked Paul Goldschmidt and hit Nolan Arenado to load the bases.

“He’s usually really tough,” Arenado said of Jansen. “Regardless if he’s not throwing strikes, his ball’s moving a lot and he’s still a great pitcher. I think it’s safe to say him and Morton didn’t feel as good as they wanted to today.”

Dickerson singled to shortstop Dansby Swanson, scoring Donovan and tying the game. Jansen then walked O’Neill on five pitches to blow his fifth save in 34 chances.

“Everything was flat,” Jansen said. “This one is the one that you’ve just got to let it go. It’s a weird one. Don’t even worry about it. Tomorrow’s another day, and that’s the beauty of this game that I get to face the same hitters again, and I can go to work and get back on track.”

O’Neill also earned a walk-off hit-by-pitch on Aug. 16 against Colorado to become the first player to earn walk-off RBIs without hitting the ball twice in the same month since Cincinnati’s Tracy Jones earned walk-off walks on June 28 and 30 in 1988, according to STATS.

Ryan Helsley (8-1) pitched a scoreless ninth in his first appearance since Aug. 16 after missing eight games due to the birth of his first child.

Charlie Morton allowed four runs on five hits and three walks and struck out four batters, but didn’t figure in the decision.

“He kind of wasn’t quite as sharp as he had been,” Braves manager Brian Snitker said. “That’s going to happen, too. He left the game with a lead and had a chance to win the game.”

Jordan Montgomery allowed five runs on eight hits in five innings after allowing just one run in 25 2/3 innings in his first four starts with St. Louis.

D’Arnaud hit his 14th home run of the season after Matt Olson and Riley led off the fourth inning with singles. Montgomery had retired nine straight batters after Dansby Swanson’s leadoff single.

Michael Harris II drove in William Contreras with a single up the middle later in the fourth inning to push Atlanta’s lead to 4-0.

Knizner hit a two-run homer into the Braves’ left-center field bullpen for his second home run of the season, cutting Atlanta’s lead to 4-2 in the bottom of the fourth.

Olson and Riley hit back-to-back doubles with two outs in the fifth inning to give Atlanta a 5-2 lead.

Arenado answered in the bottom of the inning with a two-run home run to left field, his 27th of the season, cutting the Cardinals’ deficit to 5-4.

The Cardinals activated Arenado off the paternity list and recalled LHP Zack Thompson from Triple-A Memphis. The club optioned 1B/OF Juan Yepez and LHP Génesis Cabrera to Memphis. Cabrera allowed five runs on six hits in one inning Friday night and is 1-1 with a 10.38 ERA in 14 outings since July 9.

Atlanta: Placed RHP Jackson Stephens on the seven-day concussion injured list and recalled RHP Jay Jackson from Triple-A Gwinnett. Stephens left Friday night’s game after being struck in the head by a line drive off the bat of Brendan Donovan.

“He got checked out last night,” Snitker said. “ Everything was good. He just has to lay low for a little bit.”

St. Louis: LHP Steven Matz (sprained left MCL) threw 37 pitches off the mound at Busch Stadium pregame as he works to return as a reliever in September.